I need to project onto 3 different sized screens (or at the very least one centrally bigger than the outer two). I need to use Qlab 3 for this and was thinking to use a TripleHead2Go but Qlab are suggesting that in this case all the screens would have to be the same size. Does anyone have experience of doing this and any advise on how to go about it?

I have a provideo license for Qlab and will be running video from a mac mini. As of yet the venue haven't been able to confirm the size of the screens or the projectors that we we will be able to use so its all in theory at the moment.

Thanks for any help!

Make a standard file that fits all the screens?

With TH2G, all of the outputs will be the same resolution. That being said, you can have your content be lower resolution and have blanking around it (fewer pixels for the actual image). If you happen to use a projector that is lower resolution, you should be able to get it to fit the projection surface.

Or... you can run all three projectors at the same resolution but different optical zooms.

I *think* Q3 can scale as necessary if you need projected objects the same size, but you don't say if you do.

QL3 can handle multiple 'Surface' sizes, but each cue can only reference once surface at a time. What if each cue is three separate cues, linked together, but each one references a difference surface.... This would assume that you have 3 separate video outputs though, which could be possible if you had enough thunderbolt outputs and enough processing to handle it.

rsmentele said:
QL3 can handle multiple 'Surface' sizes, but each cue can only reference once surface at a time. What if each cue is three separate cues, linked together, but each one references a difference surface.... This would assume that you have 3 separate video outputs though, which could be possible if you had enough thunderbolt outputs and enough processing to handle it.
Click to expand...

If this is what the OP is referring to it can be (somewhat) easily done in Qlab.

I've did a production of Ragtime in Concert, with multiple projections surfaces or multiple image cues on the same single surface. Like two vertical portraits on the same 4:3 screen. It was a group cue, where the first cue set custom geometry on portrait one to the left side, second cue set portrait 2 to the right side. And whats great is you can run the 1st cue in the group and the second cue in the group and go between them and tweak there placement relative to each other. When you fire the group cue as a whole it you set the Auto Continue of the first and they both fire together. Qlab as i've played more more with it is all about the Group Cue Button!

I would say projecting a individually unique media to 3 discrete outputs though because a Hardware problem that needs solving. The same media on 3 different sizes can maybe solved in part by focal distances if the resolutions for the different output destinations are different. Remember most projectors and TV's by default will show whatever is given to them Fulls screen even if the image is "digitally" much smaller, (like a 480p video on a 1080p TV, I'll just show the 480p as big as it can and just add bars.) and if not, most TV's (some Projectors) have an aspect button, that can stretch or add bars or show native resolution if needed.
M

We recently did a production with 3 screens using the 2 display port outputs and a usb3 to hdmi converter. The Mac automatically dropped the resolution on the usb output down to 480, but with the screen sizes and the distance to the audience it was acceptable. 2 projectors hanging onstage, the 3rd a straight shot from back of house. 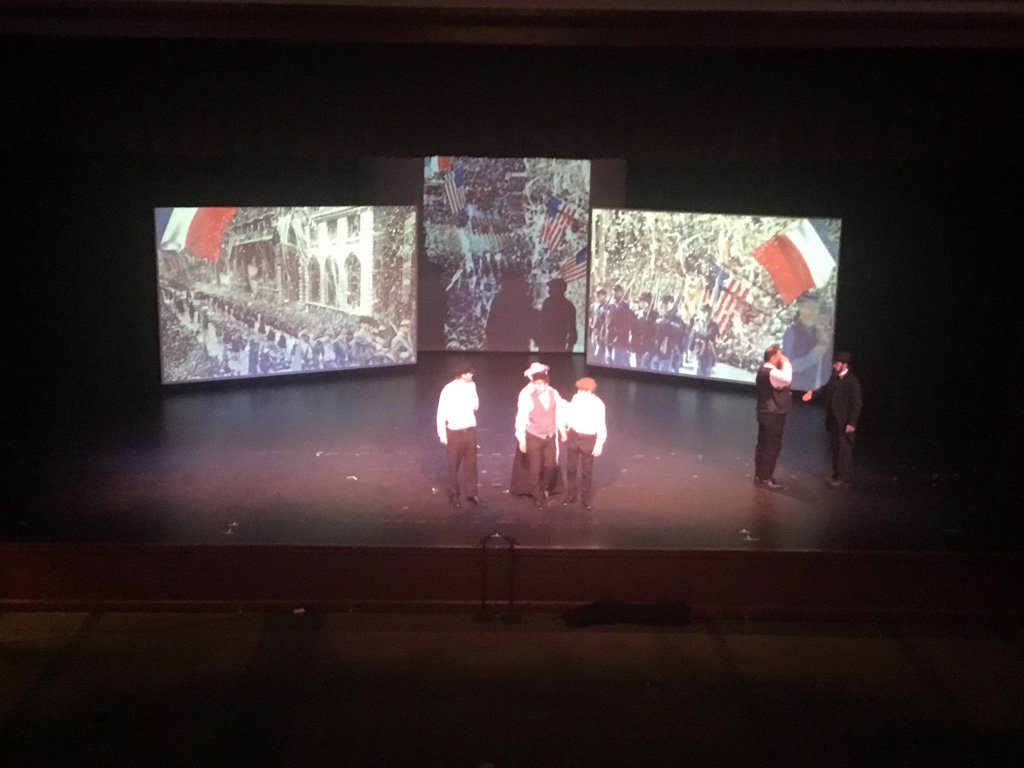