Just got a 3d printer.. My son was laid off (mildly autistic) at the start of this, so we ordered one so he could
refresh his CAD skills instead of playing computer games full time. I've been printing some masks for work
that seal much better than surgical masks no more glasses fogging.... But really cant wait for the next request for that
small prop that seems to be made of Unobtainium... This sucker is fun.
D

I got one about a couple months ago, an Anycubic Kossel Delta Linear Plus that was available locally for a great price. It is a lot of fun when it's not frustrating...but sometimes a little frustrating when it's not fun. It has been a pleasant diversion overall, though, and genuinely useful for a few odds and ends.

Besides making little things that are otherwise constructed from Unobtainium (or Expensivium), it can also be handy for the odd jig for building other stuff, or that odd part missing by accident or by design. I greatly improved my cheap Harbor Freight roller stands with a little clip thingy to keep the cross-bolt that holds the feet on the uprights from sliding out of position, which it was apt to do previously when setting up or repositioning them.

Is this you asking us for thing for y’all to build and send out to people. Cause I have a few thing thank are expensive that could be built with a printer.

Amiers said:
Is this you asking us for thing for y’all to build and send out to people. Cause I have a few thing thank are expensive that could be built with a printer.

Was more like a "when my theater is back producing stuff" but what you have in mind? I'm more of a "take this existing design" newbie printer right now.
The son does have some basic CAD skills though.

A pool circulation floater. That is powered by a solar panel.

Round or square doesn’t matter. A slot to drop a pump and a fan or turbine, dealers choice that has holes in it for the water to pump out of it and self move.

Thats probably above my pay grade at present.. I was thinking more along the lines of "antique candle stick" or
Captain Cosmo's Ray gun
R

Amiers said:
A pool circulation floater. That is powered by a solar panel.

Round or square doesn’t matter. A slot to drop a pump and a fan or turbine, dealers choice that has holes in it for the water to pump out of it and self move.

@Amiers Add a filter and market it as a Poolba; A Roomba for pools. It's working for me.
Toodleoo!
Ron Hebbard
S

If you either of you have an intrest in learning a bit of Arduino code I had a buddy print these 7 segment displays for me. I then stuffed them with WS2812B LED tape, wired up a few buttons and made a large scoreboard for playing cornhole with my family.

I want to get one so bad! There are just so many options out there right now, how does one decide?!

With every one printing PPE, they are a bit more scarce right now, but am very happy with my
Creality Ender 3 pro. I did look at a lot of reviews videos, and how to stuff, so I was ready to hit the ground running.
But for less than 300 bucks, this thing is really impressive. 8.6 x 8.6 x 9.8 build volume

Had a friend start on a vortex basket enhancement. Will update when it gets shipped and installed. 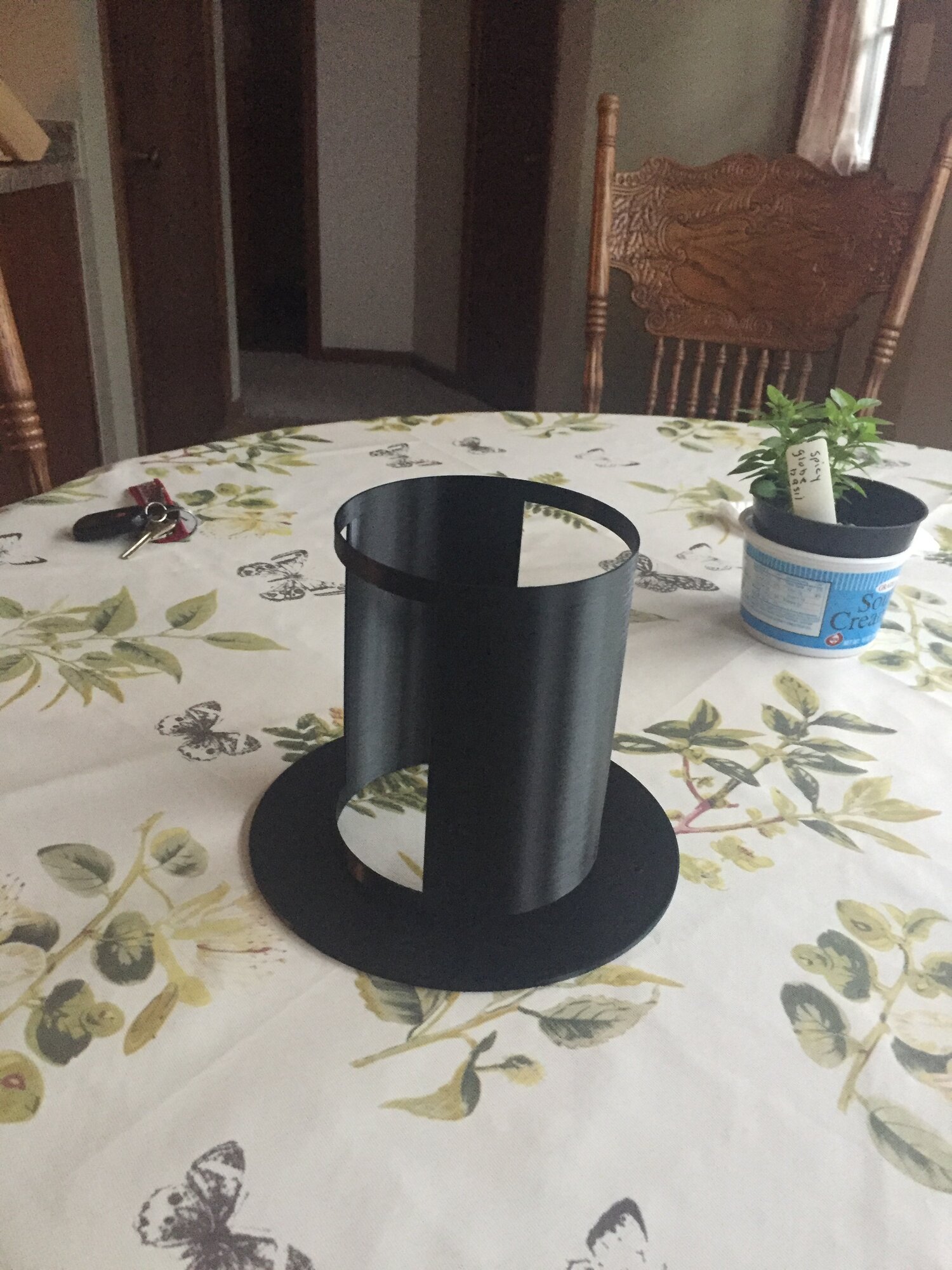 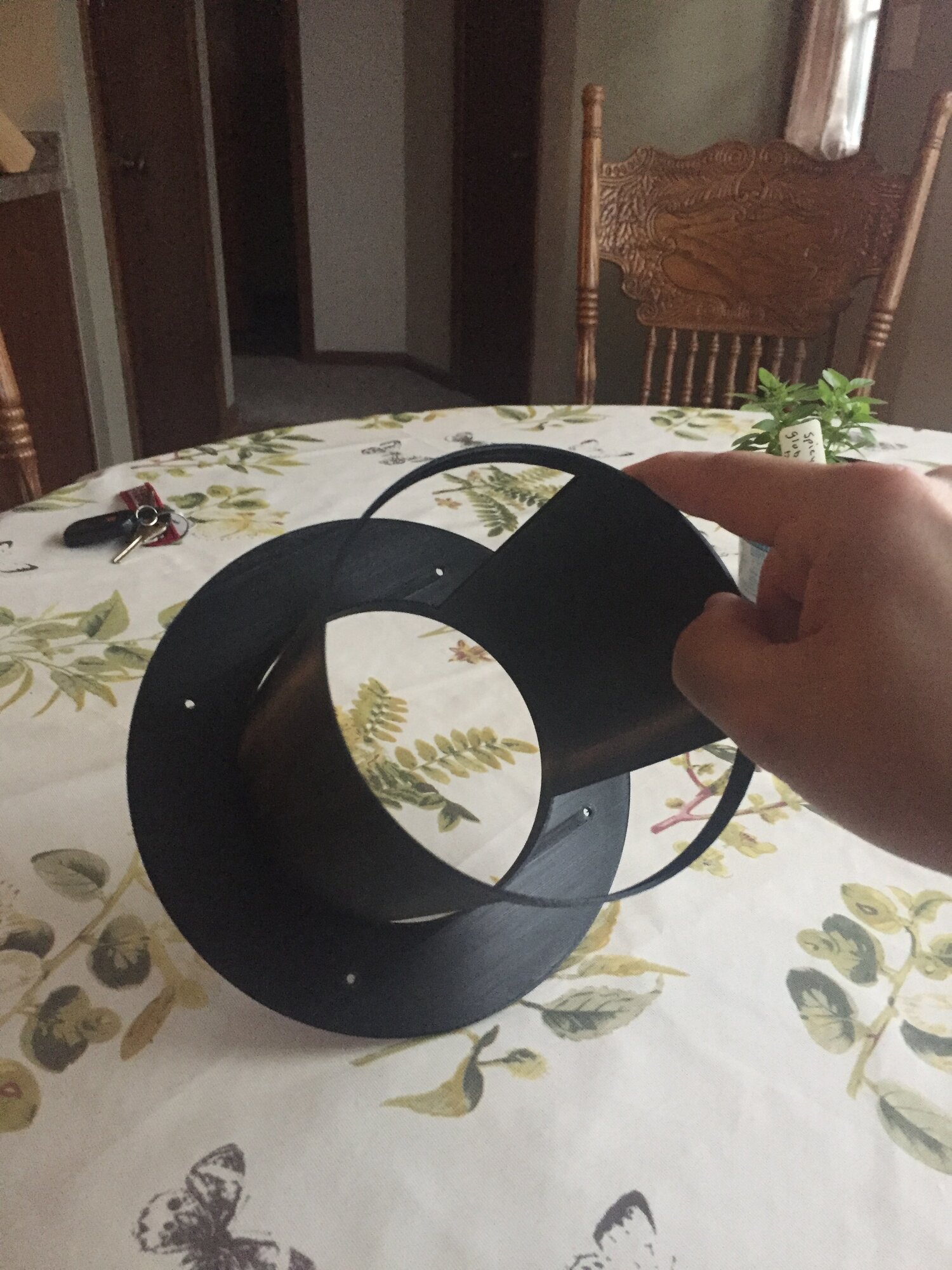 First thing I'd do with one is some of these adapters to replace the god awful 421 mic clip. 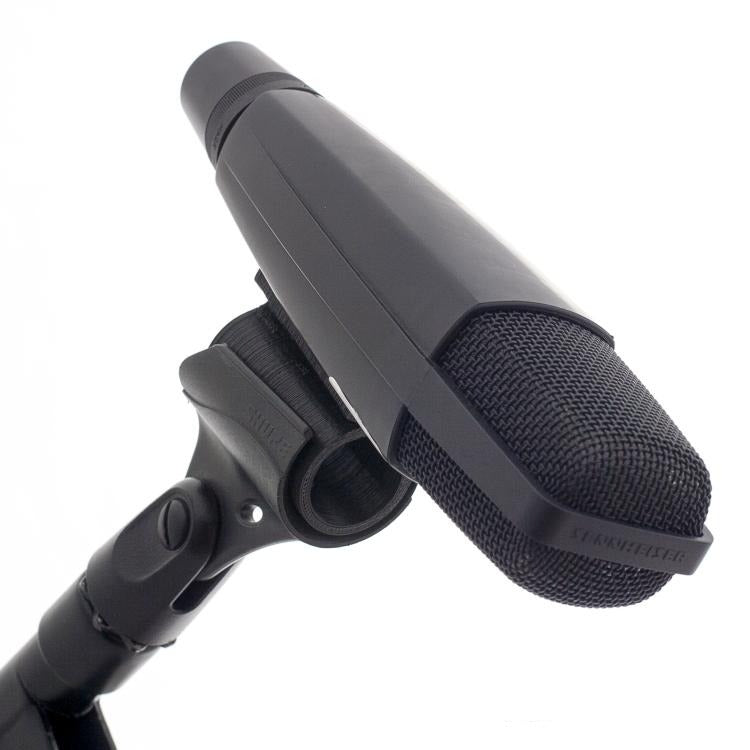 This clip will save your MD421 from repeatedly hitting the floor due to it's mind-alteringly bizarre stock clip design. This clip adapts your mic to instead fit into a Shure A25D mic clip, as well as many others. This clip works with the following microphones: Sennheiser MD421
wilkinsonaudio.com

Those same folks do a bunch of 3d printed stereo bars/ORTF holders etc, and I've eyed their right angle adapter for the 57, would be useful for tight spaces.
Its those little accessories that I think would make a printer real handy.

I know at least one prop maker who prints batteries and battery holders or blanks that match up with electronics they may rent or buy later and stuff like that. It helps him leave the right space and prototype certain props more effectively. Also know at least a handful of theaters that are printing scale models and furniture both for the visualization of it and as part of their accessibility program to have for people to see another version of the set.

rsmentele said:
I want to get one so bad! There are just so many options out there right now, how does one decide?!
Click to expand...

Anything in Prusa's current lineup is good. Large community, great support, lots of updates; which are all good things for your first printer. I have the I3 Mk3, but their new mini is very attractive at the price point. They also make reaaaly nice filament.

If you want a good printer without dumping a lot of money for your first one take a look at the Prusa Mini. Lead times on shipping are kinda long depending on the model you choose, but well worth the wait. And, the best part, each printer comes with a bag of gummy bears.

This attaches to my basket in my skimmer hole

The next plan is the take this style setup and make a floating version of this. With a pump, battery and solar panel. That floats around and auto skims 24/7 off a solar panel.

Any engineers/cad/hobbyist/idea makers/ RND that is bored and wanna hop on this train let me know.
C

I have a Monoprice Mini Delta. They have a tiny print bed, and are finicky as all get out. Once you get everything tuned and setup, it can print some really nice resolution things. I picked mine up from an open box sale for about $80, and that's hard to beat. If I was buying another one I'd start with one of the Ender 3s, or similar. They seem to take a lot less attention to get working nicely.
J

I've got a Creality CR-10 - got it for the giant bed and extra height. (Learned first on delightful little Monoprice thing.) I use mine for 3d models, and have done some props... Medieval door knockers... fake giant hinges when the real thing was crazy expensive.... did a show in Feb/March with 1920's microphones.... Have also learned when it's not worth it... like the prototype Source 4 Par tophat that took 20+ hours to print.

I've got a QidiTech X-Max (mildly expensive, easy to use) and and Creality CR-10s (inexpensive, takes a fair amount of hand-holding). I've used them both to print functional parts like cable hangers, stage props like plague masks for our recently canceled production of The Imaginary Invalid, and scenic details. I just finished a scale model of the theater, and mask extenders to give away. I'm slightly obsessed. If given the choice again I would probably have opted for a Prusa instead of the Creality. I love the QidiTech. Essentially, it's allowed me (resident scenic, lighting, sound, and props designer/TD/Production Manager/co-Artistic Director) to be able to design something and not worry about who I can find to build it if i don't have the time.

If you don't already, setting up one of these is a very nice accessory for a 3d printer. https://octoprint.org/

It's a nice web interface to manage the printer and print jobs. You can even plug a webcam into the Raspberry Pi that it runs off of. Very slick, and it means I don't have to print from the SD card or keep my desktop or laptop hooked up to do a print. You upload your G-Code through the web interface, set your preheat temps, and hit go. Although, upon further review, you can run it on Linux, Windows, or MacOS, but a Raspberry Pi is definitely the way to go.
D

Please note that I'm still something of a beginner at 3D printing, so this guidance is probably rather incomplete and may even be misleading or wrong in parts.

Most all the really inexpensive printers tend to require more or less fiddling and tweaking to get working well--fine if you're looking at a hobby, not so great if you're looking for a tool that you can plug in and use. (A fair few are kits that require assembly, for that matter.) Particularly with these lower-end machines, I think it's a good idea for beginners to get a popular model as there will be more readily available help from forum posts, etc. when things aren't working quite right, and to figure out the best ways to fix design flaws or limitations that really probably ought to have been right from the factory. In some respects they're sort of like some Harbor Freight tools; it may take a bit of re-engineering to make something really useful.

In terms of specific features to look for, there's rather obviously build volume (how big a thing you can make at once). Beyond that are some things that affect what all materials you can reasonably print with. The current "standard" plastic is PLA, which is easy to use, doesn't give off much in the way of fumes when printing, is pretty inexpensive, and is reasonably strong although brittle. It does not handle elevated temperatures too well--PLA parts would tend to get soft and maybe droopy in a hot parked car, for instance--and has a tendency to creep a bit over time when under stress, which among other things means screws threaded directly into the plastic tend to self-loosen over time. While it's possible to print PLA without a heated bed, nearly all other materials require one, and most also require a hot end that can reach higher temperatures (an all-metal hot end) and possibly an enclosure to hold the heat in. Some pretty much need ventilation outside or at least through a decent filter due to icky fumes. For printing flexible materials (with rubber-like consistency), a direct-drive extruder is helpful.

That's all about FDM machines. There's another entire class of machines that are based around UV-curing resin rather than squirting out melted plastic. (There are a few other technologies around as well, but they're in the tens or hundreds of thousands of dollar range.) The resin is kind of nasty smelly stuff, a sensitizer similar to epoxy, and cleaning up the finished prints can be a bit of a messy operation. The resin is also comparatively expensive. The big advantage the resin printers have is that they can produce very nicely detailed prints, and do so at comparatively quick speeds. There are some resins available that can be used as matrixes for metal casting using lost-wax equipment and techniques, if I'm not mistaken, which is a neat way of making such things as rings or charms.
You must log in or register to reply here.
Share:
Facebook Twitter Reddit Email Link