A more colorful logo to celebrate with PRIDE

There are a number of people in my life, and I would imagine, plenty in yours, that celebrate this month as PRIDE Month.

Working with some of the people in my life who belong to the Alphabet Mafia, we worked to come up with a logo that celebrates PRIDE Month.

C -PRIDE Flag, inclusive of all, was originally the Gay Pride Flag, and is often still the dominant symbol of the LGBTQIA+ community.
O - Agender Pride Flag. The black and white stripes represent an absence of gender, the gray represents semi-genderlessness, and the central green stripe represents nonbinary genders.
N - Asexual Pride Flag. The black stripe represents asexuality, the grey stripe representing the grey area between sexual and asexual, the white stripe sexuality, and the purple stripe community.
T - Trans Pride Flag. Light blue and light pink are the traditional colors for baby girls and baby boys, respectively, while the white represents intersex, transitioning, or neutral or undefined gender.
R - Pansexual Pride Flag. The pink represents people who are female-identified, the blue represents people who are male-identified, while the yellow represents nonbinary attraction.
O - Non-Binary Flag. Yellow: Those whose gender falls outside of and without reference to the binary. White: people with many or all genders. Purple: Those whose gender identity falls somewhere between m/f or is a mix of them. Black: Those who feel they are without a gender
L - Lesbian Flag for Everyone. An updated flag in 2018, this flag removes the original red kiss and has updated colors.
B - Bisexual Pride Flag - The pink is intended to represent attraction to the same sex only, the royal blue to the opposite sex only, and the purple attraction to all genders / more than one.
O - Genderfluid Pride Flag - It has five horizontal stripes: pink for femininity, blue for masculinity, purple for both masculinity and femininity, black for the lack of gender, and white for all genders.
O - Ally Pride Flag- People who aren’t a part of the LGBTQA+ community, but do support them. “A”: Represents Allies, Rainbow Colors: the LGBTQIA+ community, and Black & White Bars: heterosexual and/or cisgender people.
T - Aromantic Pride Flag - Dark Green: for aromanticism, Light Green: the aromantic spectrum, White: platonic and aesthetic attraction, as well as queer/quasi platonic relationships. Grey: grey-aromantic and demiromantic people, and Black: Represents the sexuality spectrum.
H- Intersex Flag - Yellow and Purple, both gender-neutral colors and the circle is used to represent wholeness, completeness, and the intersex people's potentiality as a person born with physical sex characteristics that don't fit the traditional definitions for male or female bodies.

Is there a version for folks with non-typical color vision?
/ nudge, wink

TimMc said:
Is there a version for folks with non-typical color vision?
/ nudge, wink
Click to expand...

Ran it through a simulator here: https://www.color-blindness.com/coblis-color-blindness-simulator/ The only flags that really pass the colorblindness test for identification purposes are the Ally Flag and the Intersex flag, although the updated PRIDE flag (below) also has a distinct shape that makes it easier to identify. I looked at doing a CB logo using the below flag as a underlying color pattern/palette, but it didn't convey very well. 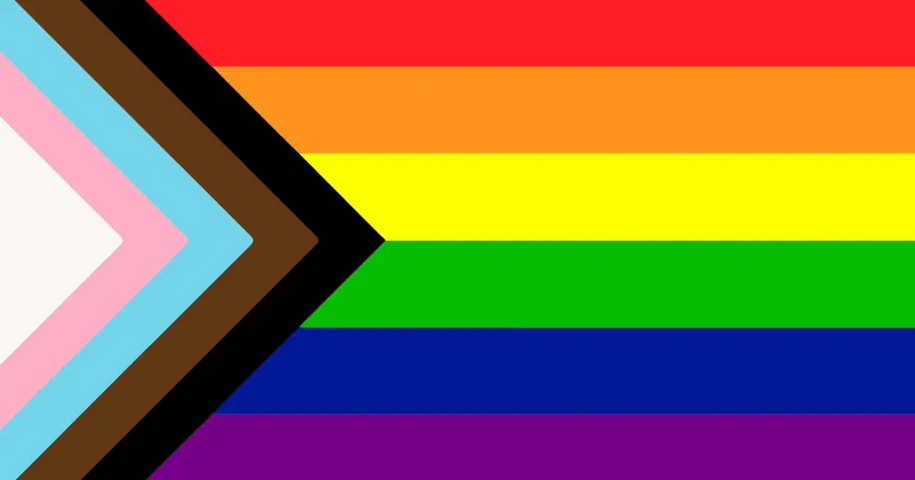 dvsDave said:
Ran it through a simulator here: https://www.color-blindness.com/coblis-color-blindness-simulator/
Click to expand...

And here I thought it was just representing the Rosco swatch booklet.
Lighting guy cultural bias showing. What an amber bastard I am

jtweigandt said:
And here I thought it was just representing the Rosco swatch booklet.
Lighting guy cultural bias showing. What an amber bastard I am
Click to expand...

How 'bout we just tickle you Follies Pink?

LUV the Inclusiveness of the CB logo! Quite creative
You must log in or register to reply here.