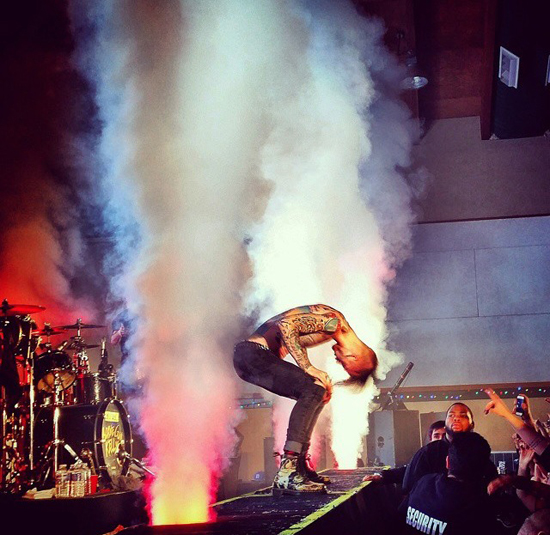 His lightshows for the likes of Machine Gun Kelly are scorching and intense, but when it comes to accenting those lightning bolt beams with fog, Alex Kelly takes a carefully measured balanced approach. Sure, there are volcanic bursts of brightly colored fog from the Vesuvio RGBA machines that invariably find their way on to his rigs, but Kay is always careful about the timing and volume of his atmospheric eruptions. Too much fog, he says, and the effect loses its wow factor.

This is not to suggest that this LD is timid when unleashing transformative atmospherics. Working closely with his artist-clients, he’s become adept at timing his fog releases with the movement of performers and key points in a song. As a result, his fog doesn’t just float over the stage, it becomes part of the performance. Kay sat down with us to share some insights into getting the most out of atmospherics.

You seem to use foggers and other atmospherics a lot and quite well. How would you describe the role of atmospherics in a light show? What do they add to a show?
“The role of atmospherics can change frequently throughout a show. At times, I’ll use them simply to enhance the beams of light by just throwing some haze out there. At other times, during a show, I’ll rely on them to create depth and dimension. Then there may be other times when I’ll use fog to mask a façade or create a façade. Most often with intense acts, I will use atmospherics to create an impactful effect at the high point of certain songs. So really, they’re one of the more versatile tools in your kit.” 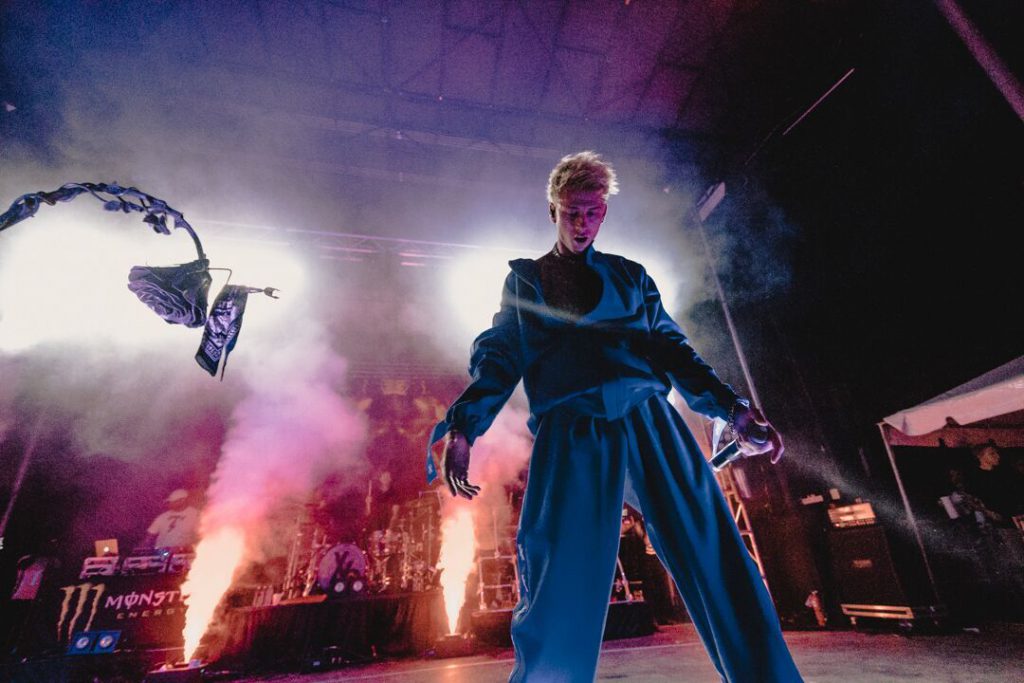 Building on what you just said, we’ve been impressed by the way you use atmospherics as a backdrop for your artists. Any advice on having atmospherics interact with the artists on stage?
“The most important thing with using any effects around performers is making sure they are comfortable with what is happening. This is obviously very true with atmospherics. I am fortunate in that the acts I work with typically get it points of atmospherics and are willing to give up a little comfort for the good of the show. Keeping certain things in the way you use atmospherics consistent from show-to-show on a tour helps the artist predict when your blast of fog is coming, which helps to make them more accepting.”

Is this true with Machine Gun Kelly?
“I’ve worked with Machine Gun Kelly for some time, so you get a sense of rhythm. I’ll trigger certain effects and he is really great at playing into those moments. For instance, we typically have some blow-thru ego risers along the downstage and I’ll place vertical foggers underneath these structures, then trigger the foggers right at the end of the intro track. When this happens Machine Gun Kelly just stands right over it and throws his arms out with his back to the crowd; creates a great look every time.

“So, looking at this story, I would say that the best advice for using atmospherics with performers on stage is to talk it all through with them, so they understand what you’re doing and why you’re doing it. When they get this, and are ready for your fog, they’ll be more accepting.”

How do you determine the optimal volume of fog for a given application?
“There isn’t a simple answer for this question. The optimal amount of fog can vary greatly based on the venue you’re working in, whether it’s an indoor or outdoor gig, and what look you’re trying to go for. I typically keep my hazer just set up on a HTP fader so I can quickly adjust it as needed throughout the show.”

Can atmospherics be over-used?
“Absolutely. I’ve certainly been guilty of this on occasion, but I’m sure I’m not the only one. Using atmospheric effects is all about balance. I’ll typically run the hazer at full before a show starts, so I have a nice base built up, then I’ll back off during the first few songs. If it gets a little too dry, I’ll ramp it up again. The thing about using foggers is that they are a great effect, but if used too much then they just fade into the background almost. Save the billowing clouds of smoke for the peak moments of the show to get the best wow factor.”

What are your thoughts on fog vs. haze?
“Each of them has their own place. The easiest way to explain the difference is that haze really isn’t meant to be seen, it’s just there to enhance beams of light. Fog on the other hand is meant to be seen and will add some great effects to the show. Another thing to think about is what kind of fluid you use in the foggers…high density, regular, or quick dissipating; each one has its proper application.” 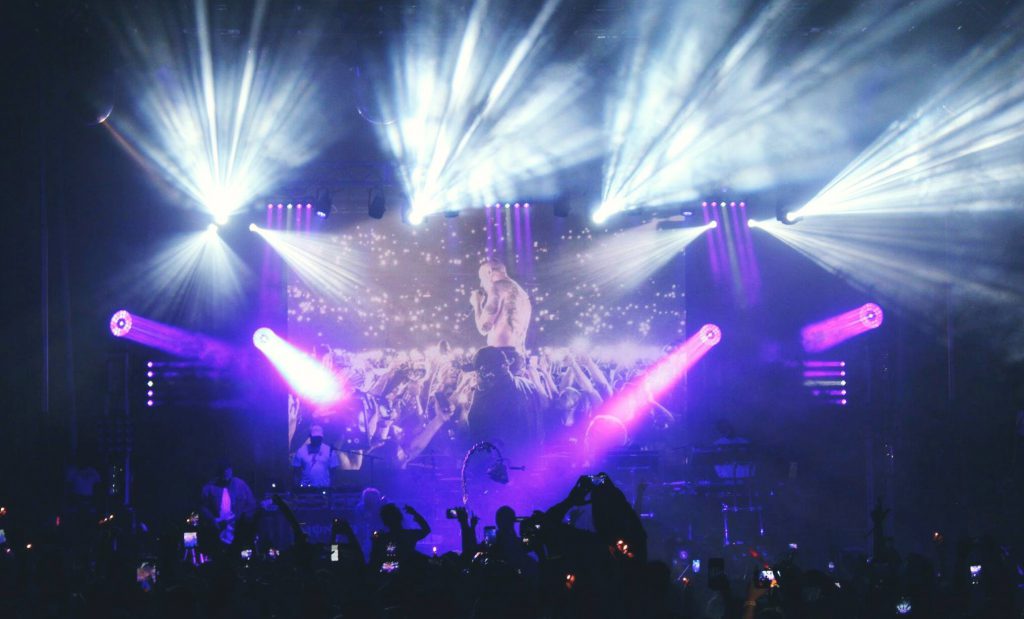 What are the best types of lighting fixtures to use with fog? When you use fog does it affect which fixtures you’ll spec for a gig?
“That’s an interesting question, because it’s different for haze and fog. With haze, almost anything will get you some good looks. When using fog on the other hand, it’s important to pick something that can throw fun patterns and an even wash. I like a fixture that can punch through it with a breakup gobo inserted, or something with sharp beams.”

Any advice on how to position and place fixtures with fog? What is the optimal distance?
“It all depends on the fixture, and the fogger on this one. I’ve used CHAUVET Professional Vesuvios both on the ground, inverted, and side-hung and they’ve worked excellent in all configurations. If you’re going for big billowing towers of fog, use the fixtures placed on the deck. For a curtain effect, invert them and hang them on the downstage or mid-stage truss. If you’re after a little more intense look, side-hang them on some vertical trusses on stage and blast them center stage.”

We know colorized fog is impactful, but are there times when you prefer white fog to colorized fog?
“Yes, l will typically use white fog when the rest of the look is something darker (Blue, Congo, UV) to give it a nice contrast. Then, when I decide to add some color into the foggers, I will throw some red and amber in there to give it a nice warm look.

What is the most important thing to remember when you use atmospherics?
“Balance, balance and balance! Everything with atmospherics is based on balance. Use too little and it’s lost. Use too much and you take away the wow fact. But if you keep it balanced, it’s usually a great addition to your show.”
You must log in or register to reply here.