Once upon a time I was able to control the ETC Ion remotely from an app on my iPad. Now, the app indicates that it is disconnected and to select the alien [cube] to connect, but when I check this I have a "connected" indicator including green light and gray internet signal [should the signal indicator be other than gray?]. When I select keys on the iPad they respond to my touch but nothing appears on "Live:" command line. I thought my institution put the Ion on a "hidden" network which I cannot see on my iPad or iPhone. I painted out the network name and IP address in adobe Photoshop [PDF attached]. So, that's my question...can there be a situation where the iPad believes it is connected to the ETC ion board and at the same time NOT be connected because they are not on the same network? I know that sounds weird, but I've checked everything. I have the app on two different iPads and one iPhone. They all indicate that they are connected and none of them can control the console. I am trying to get a response from my IT. At our institution we have a public network (wifi), a private network and a hidden one for all our class instructor laptops. I can't see the hidden wifi (if it does exist) so I cannot select it on any of my Mac devices.

The EOS IP address needs to be in Ipad configuration. The I pad is connected to a network.
Click the consoles button to see what is there.It will show you a list of consoles that has been configured. Next check the console ip address. Do this with a clear command line and press the about key. It will show you the info you need to know. Is there a matching console in the console list on the Ipad? If not you can either create one or edit the one that is there to be correct.
See how you go with this. When the Ipad is connected the show file name will be displayed on top of your screen.
Regards
Geoff
T

Okay, FIRST, thank you for all your help. I was able to ping from the iPad and from the console. Two IT guys came by today and their only thought was that our institution may be putting blocks on the network. We were able to see the IP address and, like I said, on the console screen, the ETC ion is shown as "connected" but when in REMOTE or any other interface I get the following phrase where the show file name should be listed: "Disconnected from console-Tap Alien Logo to Connect." The IT guys told me I could purchase a wireless modem and use it to set up my own network as long as it was not connected to our institutions network. They think then I could use the DHCP protocol and get better results. They don't want me to do that, though, and be on our institutions network.

NOW, something new. My colleague on another campus says she uses the ETC App iRFR-BTS. I was able to download it without any fees which means I had already purchased the app. It works fine! Maybe I'm confused and Alien Stagecraft oscRFR was never working. But it has some interface screens that the ETC iRFR-BTS does not have, ENCODERS for one. It would sure be nice to get Alien Stagecraft working, but at least I'm getting somewhere. 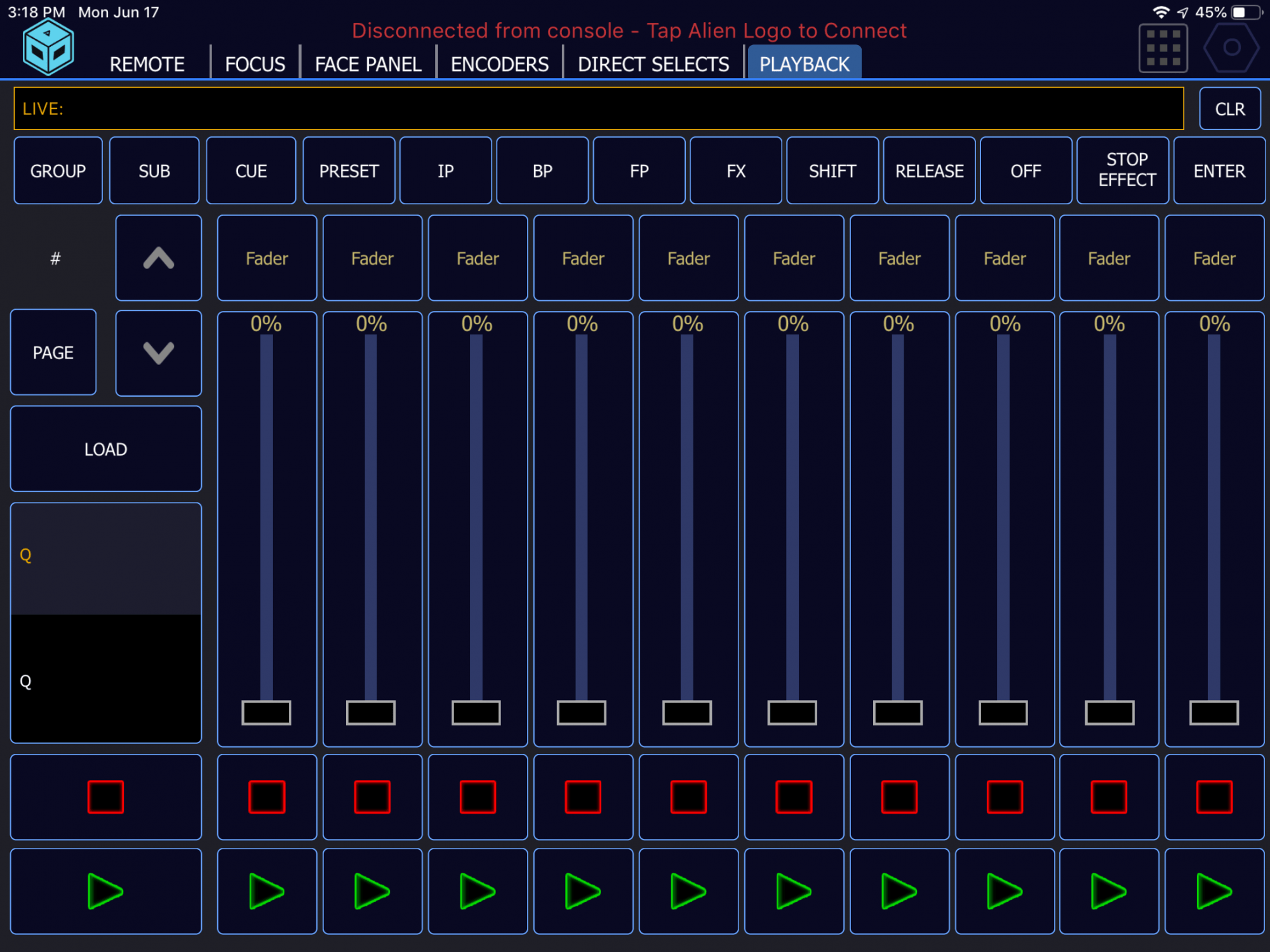 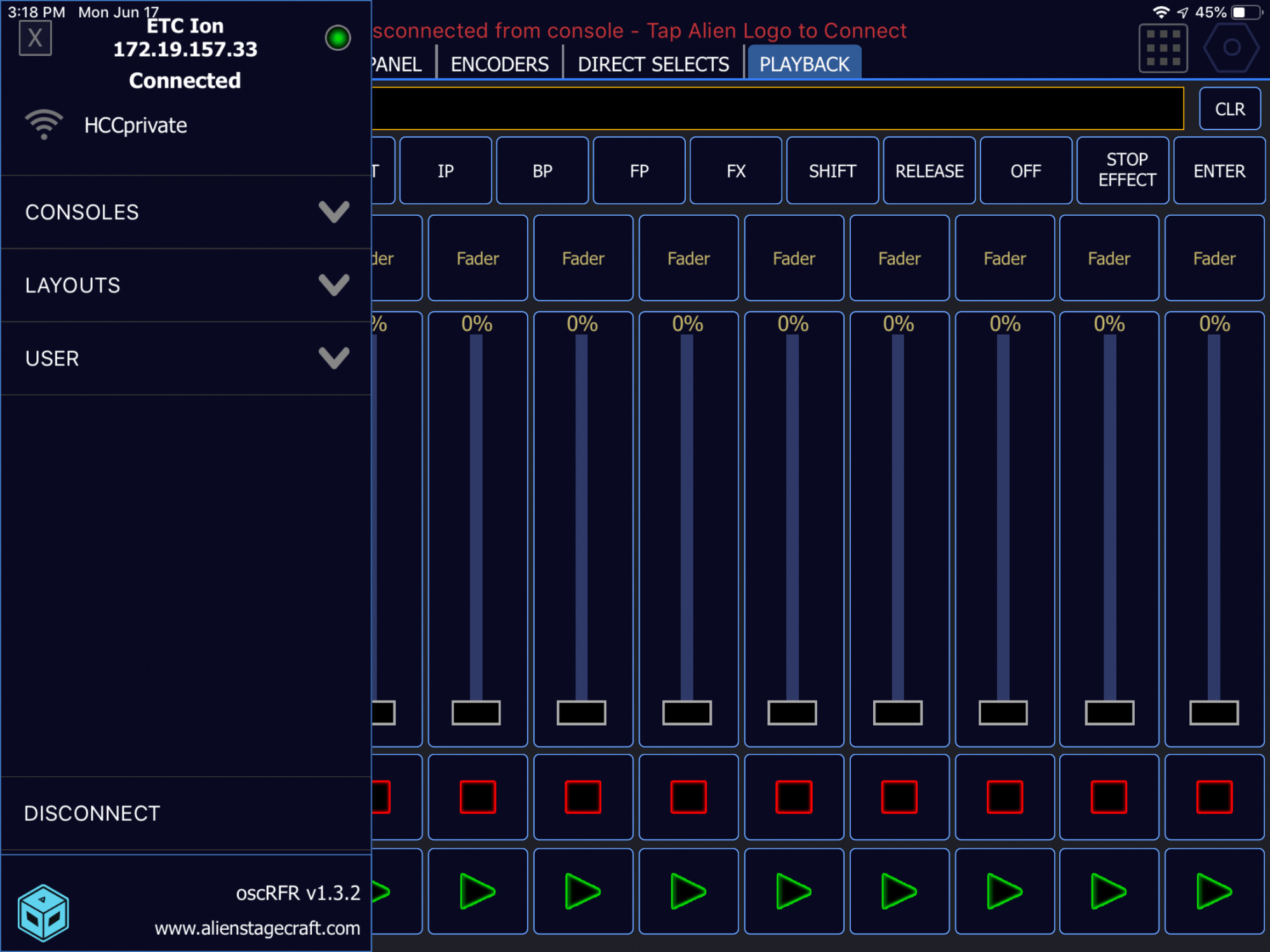 danTt said:
Can you ping the console from your device? Can you ping the device from your console? This will tell you if you have a network connection between the two. If so, what does tab 99 diagnostics show on the console if you enable osc tx/rx debug when connecting the app? If not, its an infrastructure problem.
Click to expand...