Another - no. 4 of 6 currently in Mississippi

I remain fascinated on the design choices as well. Other than insist on certain clear dimensions and pretty specific framing overhead for rigging, I stay out of other basic choices. Steel frame, pre-cast, poured and reinforced concrete (twice - once in Guyaquil (sp?) Ecuador where labor is close to free), block, light guage steel (studs), pre-engineered metal buildins a(Butler buildings - a personal speciality)t, frame (my favorite) - it's based on the beliefs and convictions of others on the design team.....and budget. Can't beat steel frame, block walls, and brick veneer IMHO.

Two in current in Mississippi unusual - the built stage house first, roof on one before foundations for rest of PAC. Not common but makes sense for schedule.

I do love the construction trailer life and boots and mud. If someone had told me about civil engineering and building canals and dams and railroads in far off foreign lands when I was in high school, I'd be there now. I love the logistics and planning if that big stuff. Planning. Anticipating what will be needed when. Exciting. Sorry for the digression. Comes from just sending my last ever set of drawings and specs out for bidding. Now just doing construction administration and planning wilderness trips, primarily solo trips. (Looking at sat phones and very light weight laptops so I can keep up on projects under construction.)

Way too long of posts. Sorry. Edging on verbal diarrhea.

Oh. The photos made it look like the backwall of the stage *was the backwall*. Not obvious it was bar-filled either. I retract my uninformed disapproval.

Not obvious at all. I was on site Wednesday and asked because of your asking.

I tend to rely on structural engineers to know what they are doing, so after making sure they have the design loads I provide, all I do is review sizes and spacing and details for block mounting.

While the direct consequences are usually less in IT, thinking ahead to all the ways something could break is what I've done for years, so I tend to do it everywhere.

Got these today. Love drone photos of projects! Fast progress it seems to me. Thats art classrooms (and culinary) unroofed to left; lobby floor - no structure yet - at top; auditorium and stage moving down; unroofed shop/black box below stage; and four large music rehearsal rooms - choral to left of shop without roof; small band, large band, and percussion (I think) right to left at bottom. (Drawing calls them BAND 2, BAND 1, and BAND 3.) Offices, uniform storage, and practice rooms buffer band rooms 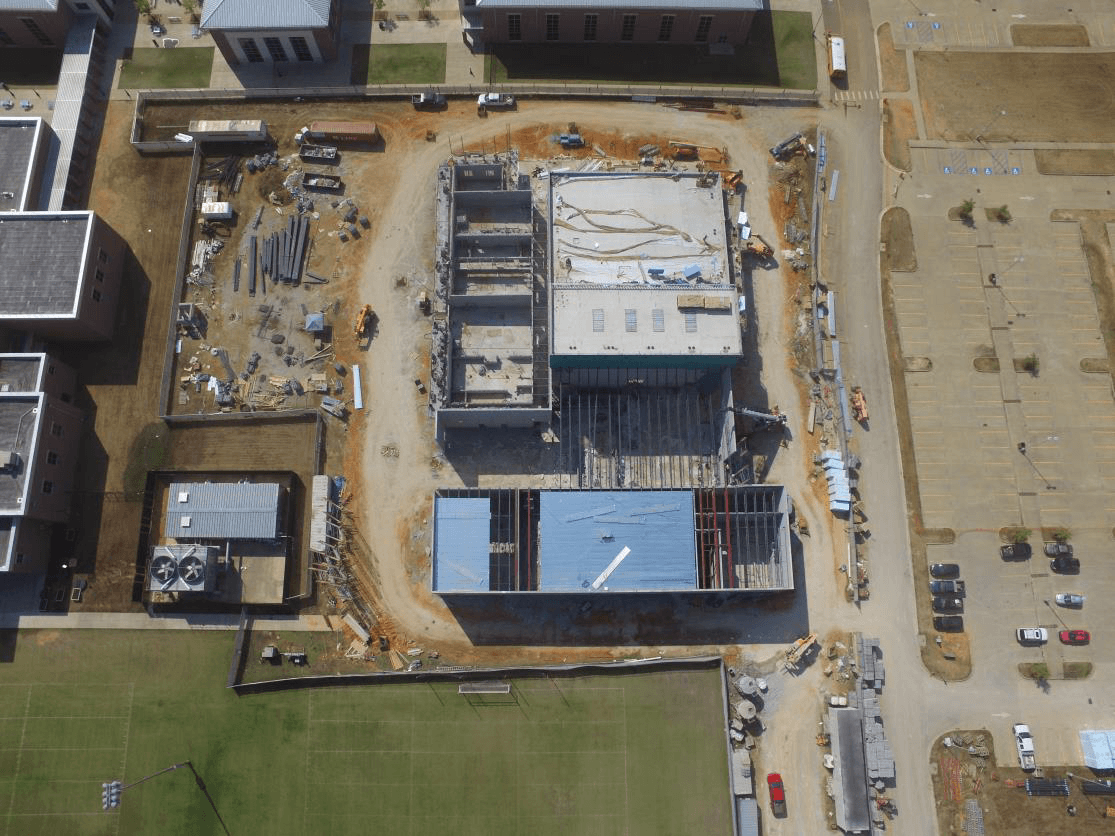 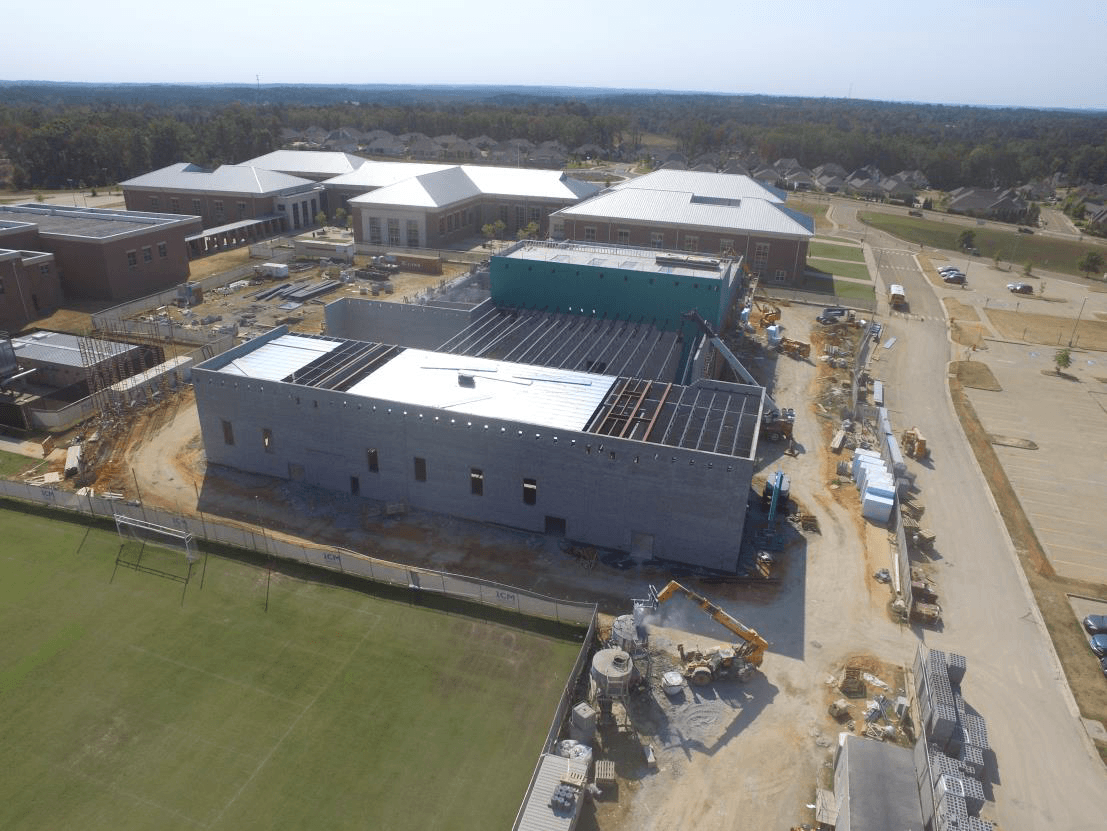 Looks like lobby walls almost up and roof deck is on almost every space. No drone shots in this week's Friday Package - an interesting report each week of progress, photos, what's due from who, schedule, costs, etc. 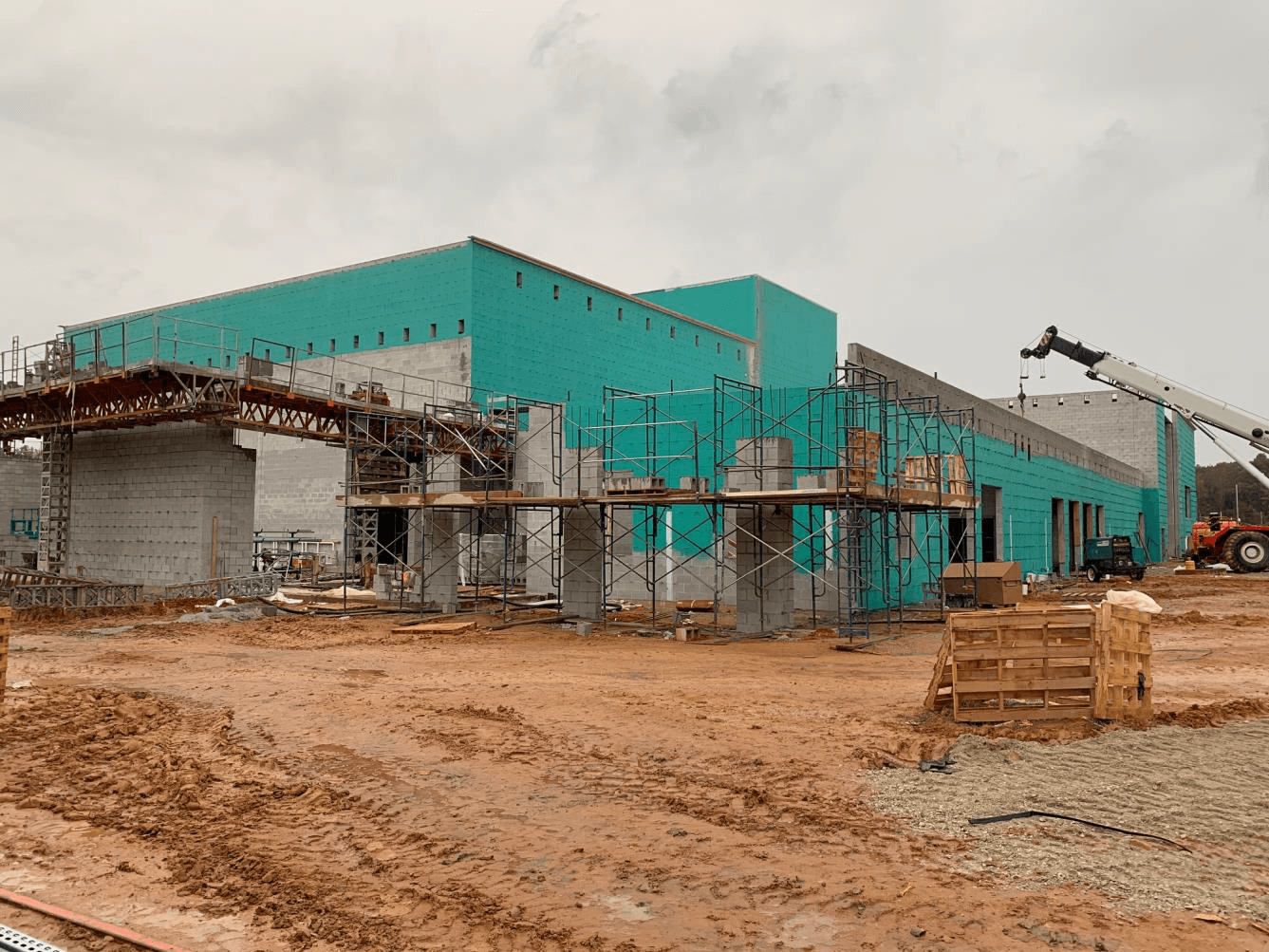 This project moves faster than most. In process of trying to add back motorized electric and maybe shell linesets that were deleted at bid time. 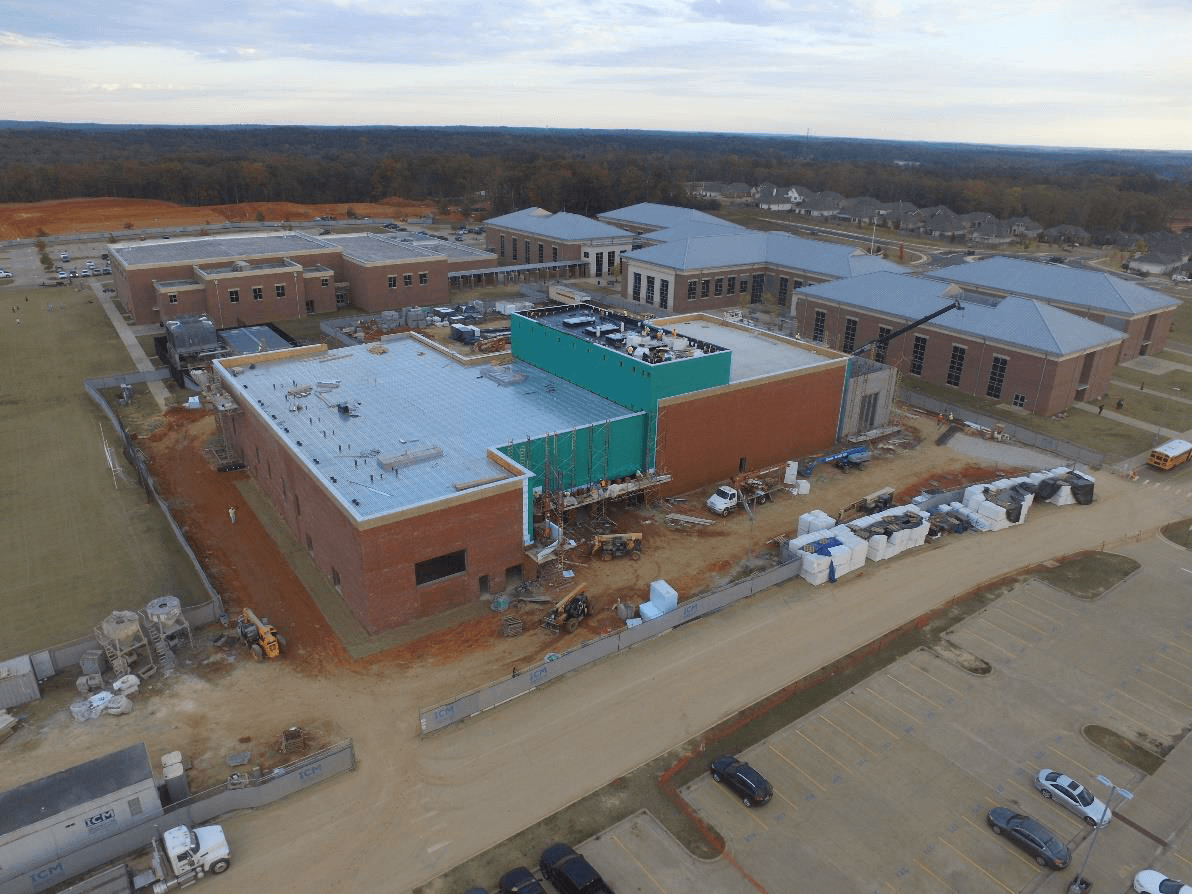 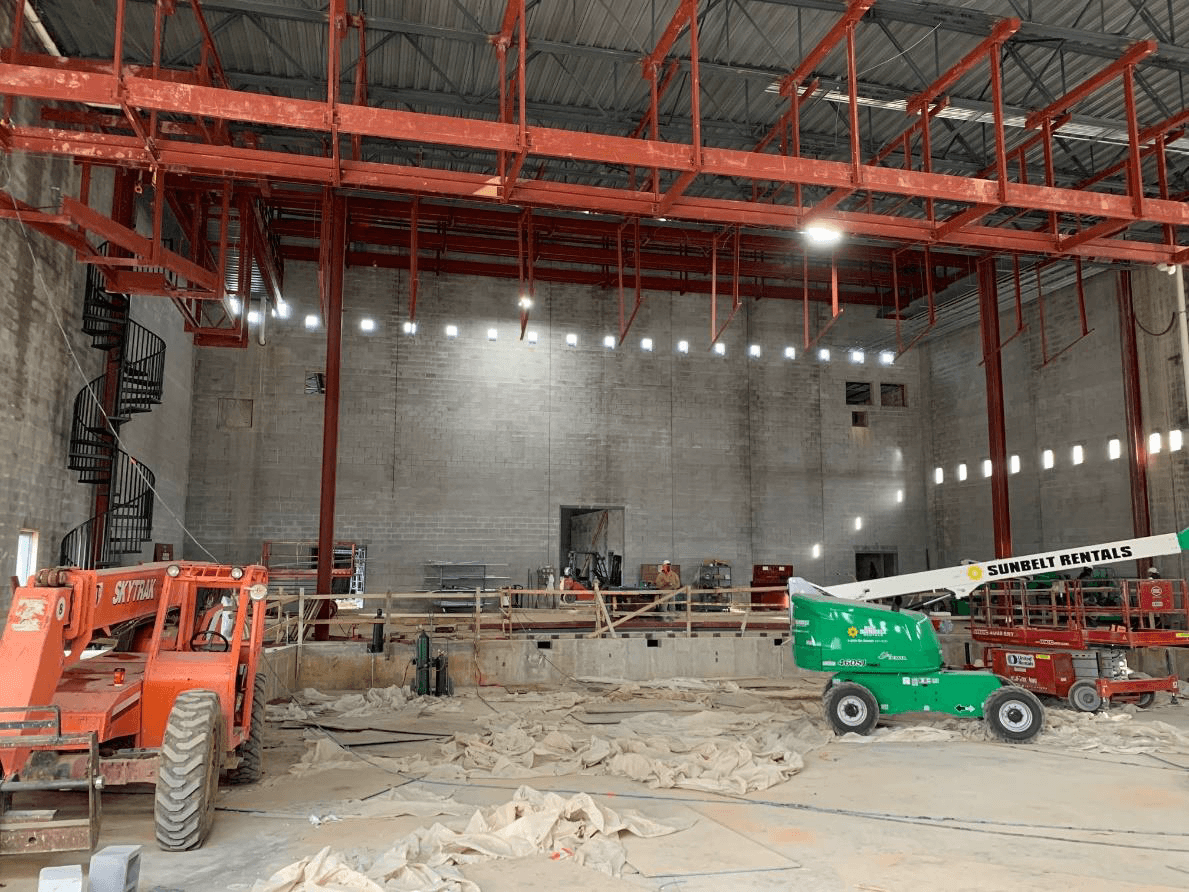 Presumably you left any relevant engineering for them in the design?

Define relevant engineering? I showed the location and details affecting stage equipment - flange widths and clearance and such - as well as locations and sizes of catwalks and suggested or typical details. Similar for stage floor and pit. BUT I am not an engineer and cannot engineer the building systems which by law require professional engineers.

What did you have in mind in particular?

"Put mounts on this flyrail suitable for powered winch units."

That's design, not engineering, no?

Generous rigging pit where motors go - some noise benefit and out of the way. Easy to anchor to concrete - reinforced and thickened floor, 12" walls. But you could also put packaged hoists - like Prodigy or PowerLift - underhung - with power heads on opposite side - where there is a catwalk 8' under steel.

View from house right entrance to stage. This is one of the fastest moving projects I have ever worked on. Several other projects in Mississippi that broke ground well before this one and are nowhere near as complete. 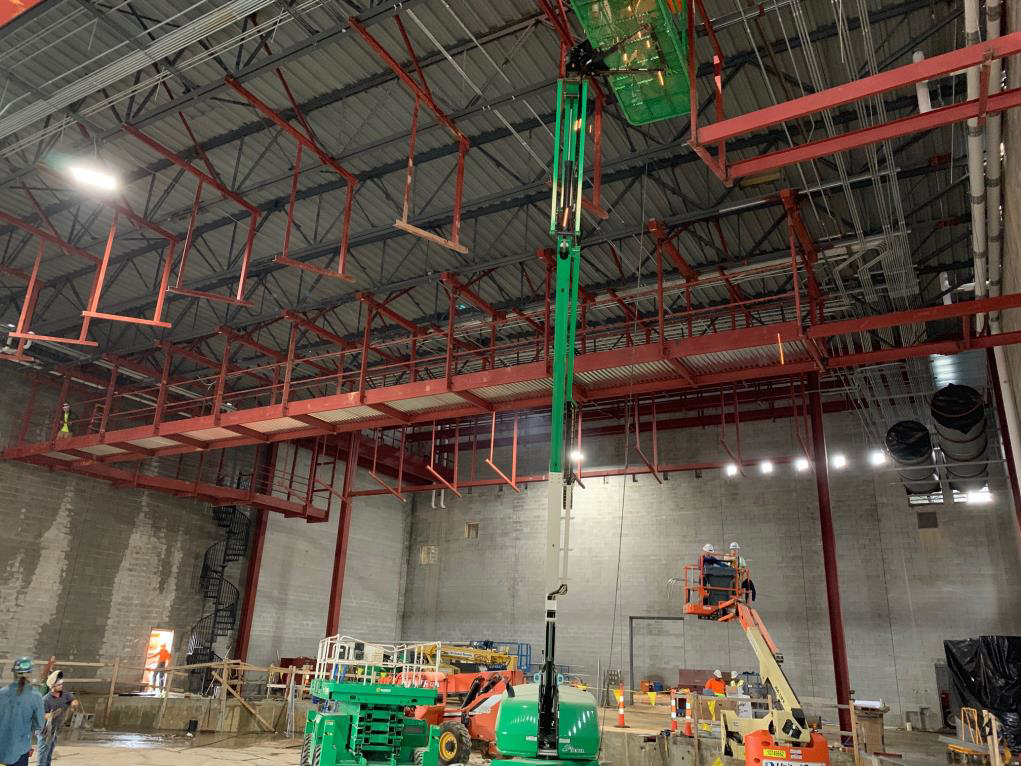 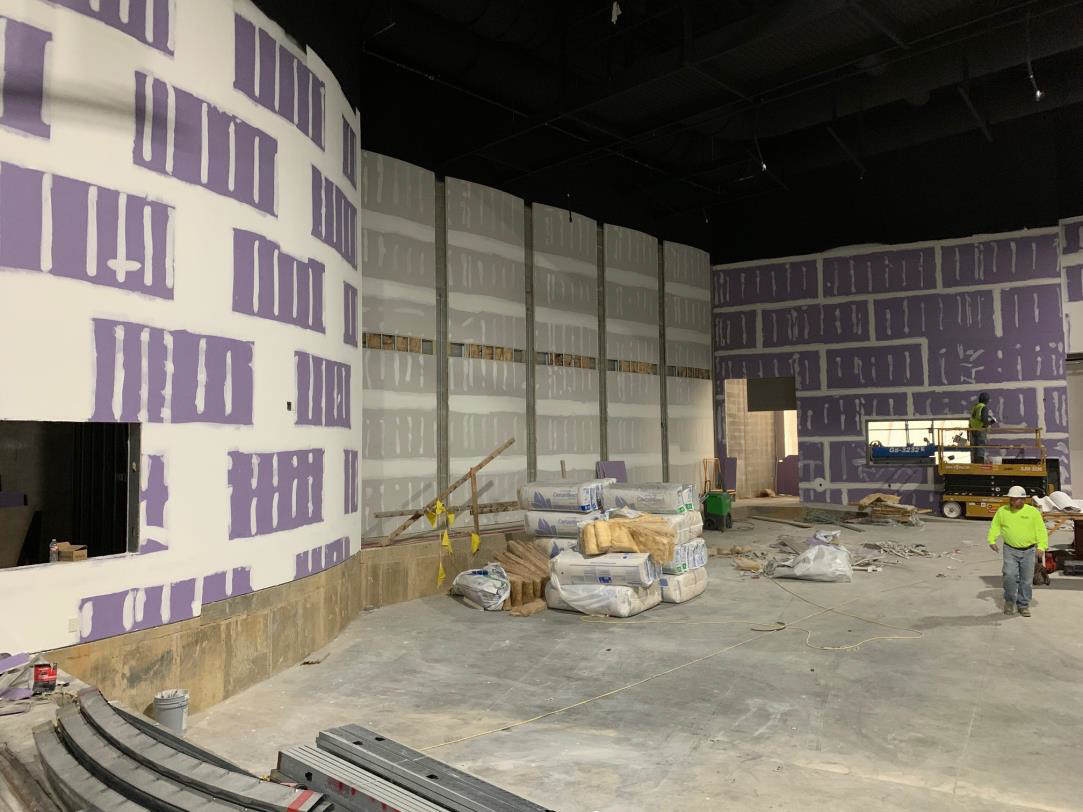 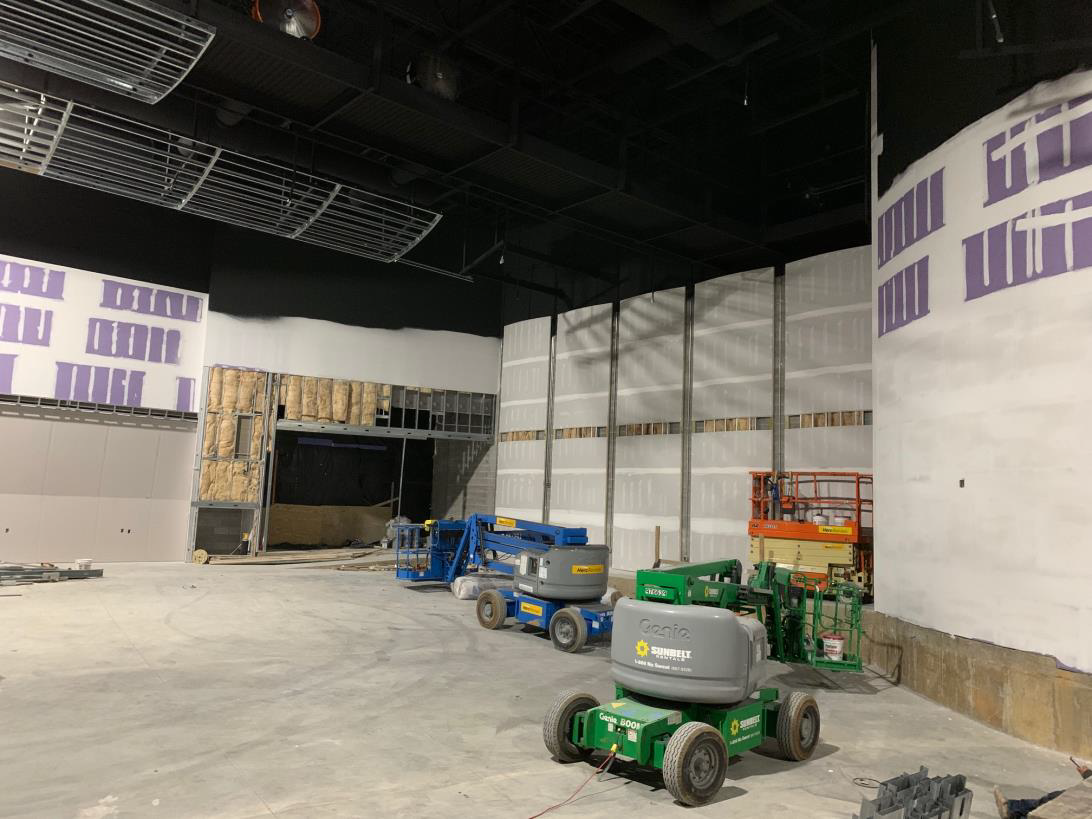 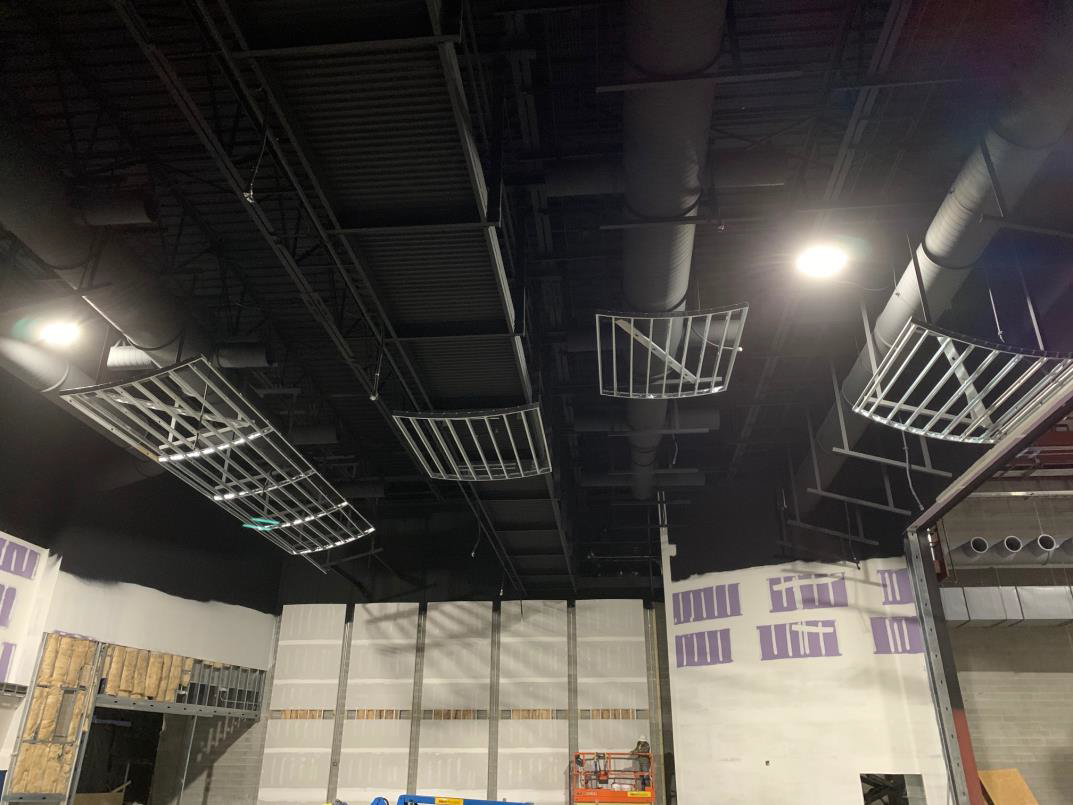 Nowhere near as fast as building hospitals in China.
Toodleoo!
Ron Hebbard

Newbie Nate Question Time:
I’m noticing the acoustical paneling going in there: Are the locations chosen for the acoustic paneling coincident with the HVAC and catwalks intentionally? To avoid reflection I presume? Audio is not my expertise, so I’ve always wondered how the location was chosen.

I expect the "how" varies but this is a project where the acoustical consultant and I have worked together on a lot of buildings so we kind of know in advance the other's review. Most often I set the catwalk location (after I have the stage and audience laid out) and guess at the clouds. I think all acoustical consultants want a forestage cloud. Most architects like some ceiling but have done a few with nothing other than forestage cloud. "hiding" the catwalk is just logical. One higher between catwalk and forestage may be useful acoustically depending on what's over. A metal roof deck with concrete may be just as useful, all balanced with budget and aesthetics. Past the last catwalk I don't think most acoustic consultants feel anything is necessary but often is one for looks. I prefer none because it makes house lighting harder and more expensive - lights under and/or in those clouds - and it makes any delay speakers at back of catwalk often harder also. Then HVAC is worked into it (or not if its an underfloor diffusion system and then virtually no ducts overhead - which is nice for designing and low noise - not so nice for budget.)

More than half the work - maybe 3/4 or more - is the zone between the main curtain and first row of seats - side wall to side wall - pit floor to roof. Everything wants to be in that zone - and too often planners try to put a stair there and that's a killer.

But the centerline section is the key to the auditorium issues, which is why I start design a theatre in section first, and then extrude the plan from it. (And elevation - of linesets - is the key to rigging system design.) I have been heard to say any idiot can solve the plan problems.