are home made gobos safe / source 4 base arcing

First let me start out by stating that I do not fall into the "lets ask the Control booth people about something completely ridiculous/out of our(my) league and do it anyway" category. i am too much of a safety nut and too cheap to brake stuff.

Anyway, while cleaning I found a home brew gobo. Its approx. the size of a normal gobo holder, and about 4 times the thickness. The pattern is plasma cammed out. its a common sheet metal.

My only concern is heat dispersion from the higher mass of the the home brew gobo.

The lamp bases on a couple of our s4s have are corroded. More specifically the ceramic sockets have corroded along with the prongs on the lamps them selves.

Inside the prong holes its all corroded and even slightly cracked around 1 of them.

I realize this is serious stuff, so do I call my original dealer and talk with them first? How do I play it safe ?

I see your point about the potential gobo problem but I wouldn't worry about it too much. I've never heard of anyone ever having any kind of a problem with them. As long as you use some high quality metal that can take the heat... be it steel sheet metal or pizza pan... I doubt it's a problem. I'm sure out there somewhere is a moron who made a gobo from an aluminum coke can and that would certainly be a safety hazzard. But as long as you are smart about it I don't see much reason for concern.

In general, I fail to see is the need for homemade gobos. If your theater is rich enough to have the precision cutting equipment to make a good gobo, why not just buy them? If your theater is too poor to have the equipment to make a nice gobo, you're better off buying them so they don't look terrible. I ran a high school program on an extremely small budget and always had money for gobos.

It sounds like you need to replace a few sockets on your S4's. The parts are easy to order through your dealer, reasonably priced, and aren't hard to replace.
P

hommade gobos are perfectly fine as long as the metal can take the heat.

to gafftaper: sometimes the groups may have the money, but it is cheaper and quicker to make your own. And they won't look too bad if the person making them knows what they are doing. here is one i made for Beaty & the Beast as a curtain warmer. I used a pie pan and an Xacto knife to make it. it survived two weeks running in an S4 zoom and didn't even warp or scortch. 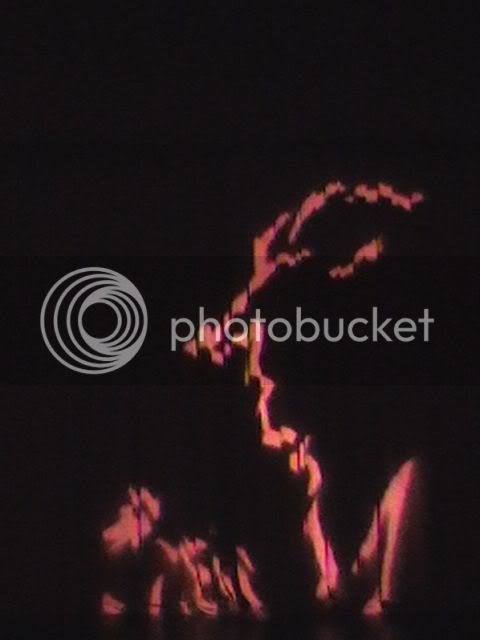 Sure hope you got permission from Disney to make that gobo...

Pyrus that's a great job. Perhaps I haven't seen home made gobos that are done well. For an X-acto knife that looks pretty good to me. I may have to explore that option further.
P

I believe they did, especially seeing as how they got permission to use that picture on many other things. Anyway, I don't really know what has happened to it since then.

Pyrus, that was a bit of a joke. Disney is notorious for being copyright sticklers with a large and eager legal team. I believed Music Theatre International handles most, if not all of Disney's theatrical licensing.
P

Ah, thanks for the clarification.

I don't really pay too much attention to legalities except for how much we are paying in royalties. we took a loss on Nunsense, the royalties were about $2000 for that.
J

avkid said:
Pyrus, that was a bit of a joke. Disney is notorious for being copyright sticklers with a large and eager legal team. I believed Music Theatre International handles most, if not all of Disney's theatrical licensing.
Click to expand...

FWIW, around '86 or so I did a corporate event at a resort for American Express. They did a 'magic night' poolside and as part of the presentations they did a gag where they played a little snippet of music from the Mickey Mouse Club ("Who's the leader of the club...") To go with the gag I put a circle gobo and two focused leikos for 'ears' on the side of the building behind the small stage. More of a suggestion of a certain mouse than an 'image'. Busted. They ended up paying a fairly hefty royalty.

I still can't figure out how Disney would possibly know about a one time, 5 second joke!

<I don't really pay too much attention to legalities except for how much we are paying in royalties. we took a loss on Nunsense, the royalties were about $2000 for that.>

Unfortunately pyrus, you should pay attention to "legalities". Even if another person/higher authority tells you to make an illegal copy of a copyrighted material, that person, the venue, the group, you, and anyone a lawyer can name are all liable for the violation. They don't fool around when they go after people, especially Disney. Fines are pretty huge. Also, just because they used the graphic on many other things, that does not mean that they actually paid for the right to do so. I think that the best/safest way to go is to protect yourself. If that means that you ask to see the signed contract granting permission to use the image, fine. Otherwise, I'd decline. There have been news articles about school districts getting in trouble and being slapped with huge fines because the school didn't obtain the rights to do things. One of the latest I heard was for a school in or near NYC (I don't remember now) that was putting on plays and musicals for a lot of years, without ever obtaining the rights. They would have the director or someone "write their own book, etc." after seeing the show on Broadway. Saying "oh, I didn't know I couldn't do that", or "I thought someone else obtained the license" doesn't fly in a court room!

That kind of stuff is just plain stealing! It is no different than using pirated software or music.

I know for a fact that they had paid for the rights to be able to put on that production/use the names and images in advertising. Whether that applied to the gobo or not, I don't really know for sure.
C

First off thanks for the great response.

To clarify, We do buy gobos but this one was a custom cut one that said "Talent Show" in stylized lettering. As a high school,we are very poor, next door is an intermediate school district office (another tax payer subsided layer of bureaucracy) they do get to play with a lot of cool stuff though.

Last, someone said I should go for it, in terms is buying new receptacles. any other thoughts

chrizEHS said:
Question 2-
The lamp bases on a couple of our s4s have are corroded. More specifically the ceramic sockets have corroded along with the prongs on the lamps them selves.
Inside the prong holes its all corroded and even slightly cracked around 1 of them.
I realize this is serious stuff, so do I call my original dealer and talk with them first? How do I play it safe ?
thanks,
chris
Click to expand...

The sockets will wear out over time--moisture/humidity, heat and temperature and the like will cause corrosion and arcing and breakdown of the socket and so on...not to mention the HPL lamp which are used in S4's being rated at 115v..but thats another story...

Only thing you can do is ensure the lamps are seated firmly, and try to avoid touching the pins with bare hands (keep out skin oils, dirt and the like).. If your sockets are prone to corrosion you can also try some cramolin paste but this often is only a band-aid solution...

Simply order new sockets and replace them--its a very simple process and will solve your problem quickly and safely...

Chriz... something to consider next time you find yourself with a few bucks is a Rosco Image-Pro (often just called an I-pro). It allows you to print your own color gobos using an ink jet printer. It will run you around $300 to get set up and then you just have to buy refills so gobos are quite inexpensive and in color. They don't last as long as steel but they last long enough for a typical high school show.
S

At my high school, we make our gobos using Matte knives (Xacto) and soda cans. Cut off the top and botto, lay it flat, draw the design and go! I've seen us make a Hammer and Sickle, our shop's logo, and I think a lightbulb. Fairly awesome.

I think it's a great idea to get the theater classes familiar with the making of aluminum gobos. As these technicians pursue their interests, the time may come when a custom gobo is needed within the next 20 minutes.
"Forewarned is forearmed"
(During the rest of the theater year however, we appreciate your calls to Apollo...
You must log in or register to reply here.
Share:
Facebook Twitter Reddit Email Link