If you haven't seen a FEMA Planning Template for the Security, Crowd Control, Medical and Fire Response etc, here's the list of the FEMA ICS Forms.

The most important Form in this ICS Protocol is called the INCIDENT ACTION PLAN or IAP.

The IAP outlines numerous scenarios and what pre-planned actions need to be executed.

EVERY Event Employee should at least read through the Templates and have an idea of what happens when.

gafftaper said:
This is a photo of the layout. I'm no expert, but I believe this is actually considered to be a fairly good anti-surge strategy. Those fences break up the crowd and give security a lot of access into the crowd. They also used the good fences, not just bicycle racks as early posts claimed. This is the kind with the elevated platforms on the back that allow security to see over the crowd. Which takes us back to questions like why did the concert continue 40 minutes after it was declared a mass casualty event.
Click to expand...

I think I posted it to the Discord channel and probably Reddit but haven't gotten into it here. Here is what I posted to Reddit about when you actually map out the square footages of [Event Lawn] - [Technical Areas] - [Barrier Areas] - [Obstructed Viewing (side areas with trees] to get an idea of audience square footage and crowd density.


...if you map out the concert grounds in Google Earth, you'll discover there's about 135,000SF of audience areas, though practically 20,000SF is obstructed viewing, technical areas, or barricaded off, so you essentially have 50,000+ crowding into 115,000SF. We have no idea how many people stormed the gates, but let's say it's as few as 2,000 non-ticketholders stormed the gates. That ends up being 115,000SF / 52,000 patrons = 2.2SF/patron.​
​
There are studies of crowd density, referenced in the Event Safety Guide, published by the Event Safety Alliance, that document states that around 3SF/patron, crowd density is uncomfortable and around 2SF/patron, psychological effects of a densely crowded mass of people can create panic and dangerous crowd forces. Effectively, the crowd no longer behaves like individuals but like a fluid or an amoeba.​
​
If the event were held in a football stadium, it would fundamentally alter crowd density. People would be better contained to manageable areas with limited occupancy per area, clear pathways between them, and improved egress and right-of-way of security/medical teams. In an open air festival such as this, no such compartmentalization of audience areas exists and crowd density can continue to escalate and crowd surge can propagate across the entire audience plane.​
​
To my knowledge, we have no idea how many non-ticketholders stormed the gates. Some were likely ticketholders who wanted to get up front as early as possible in the day, but on top of them was it 200, 2,000, or 5,000 additional people? In any case, their crowd density was pushing that 2SF/patron critical threshold before those additional non-ticketholders were factored in.
Mike Nicolai, CTS-D
ETCP Certified Entertainment Electrician #3212
Venues & Acoustics Project Manager
Instagram | Twitter

TheaterEd said:
This incident actually had me thinking a lot about Summerfest here in Milwaukee. The per day average for Summerfest in 2019 was 65,000. In all my years attending I never recall feeling the crush like I have when going to shows at The Rave in Milwaukee and I realize now that it is because of the benches. As an attendee, I HATE, the benches. You can't sit on them because everyone stands anyways, and inevitably everyone is standing on them which makes for a wobbly concert experience. HOWEVER, because of the bleachers, there are always walkways through the crowds, and getting a density high enough to cause a crush is just not possible.

So now I find myself in the precarious scenario where I agree with having the bleachers in front of the stages, but I'm still going to be grumpy about it.
Click to expand...

Summerfest is a completely different behemoth. There's nothing like Astroworld at Summerfest. Summerfest has like 12 or 15 stages, and the two largest venues on-site have dedicated seating available, one of which is reserved seating. There's no circumstance where all 65,000 would be consolidated at one or two stages. I have a similar love/hate relationship with those bleachers, but Astroworld was designed so that the headliner on the mainstage was where everyone would flock to at the end of the night. There was no act on the side stage during Scott's headlining performance. 50,000+ people were descending on a single event lawn.
Mike Nicolai, CTS-D
ETCP Certified Entertainment Electrician #3212
Venues & Acoustics Project Manager
Instagram | Twitter

Premium Member
Death toll up to 10. Nine year old Ezra Blount died as a result of his injuries at Astroworld.
"We’re in this period now when you can’t even write about bad behaviour because it might seem like you’re condoning it." - Ethan Hawke

Totally agree with you, this is just the first time that I looked at Summerfest trough the lens of crowd control and now see some merits to those darn bleachers. It's easy to see how the scale of this can cause things to go wrong without and appropriate plan.

DMXUser said:
The most important Form in this ICS Protocol is called the INCIDENT ACTION PLAN or IAP.
Click to expand...

For those who have never worked anything big enough to run into ICS (I haven't, but I'm a systems nerd):

Incident Command System is the federal agency standard for incident response planning and execution; the idea is that everyone who works for any organization which might be called to respond to something are all working out of the same playbook; it details what different types of services are necessary, who provides them if that agency is available, who is in command of the incident, and how that devolves upwards as higher ranking individuals arrive on-scene, and like that. 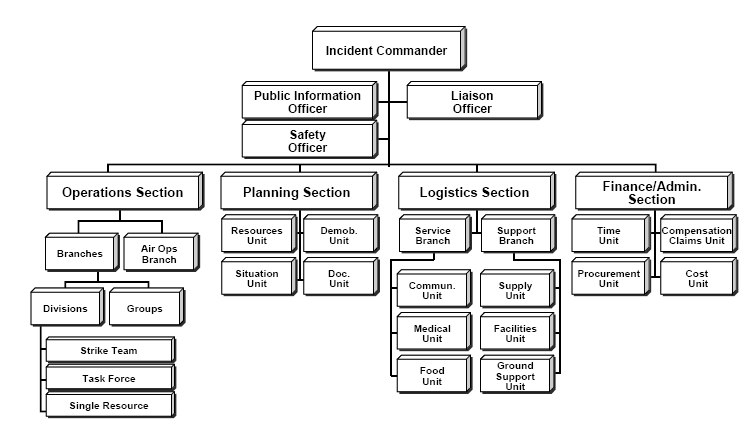 If things get to city- or metro-level, then you probably have enough stuff going on that you're looking at NIMS:

[ Side Hobby Horse Rant: NIMS outlaws brevity codes in favor of plain language. (Specifically 10-codes, but other things too.)

As both a 40 year ham and an ostensible communications professional, I understand what they're driving at, but it's my analysis that they've blown it.

The problem with Plain Language is *exactly* the same as that of 10-codes: there's too much of it. Aside from the "not having to talk about the rape in front of the victim" feature, brevity codes have the advantage that -- as long as everyone is using the same dictionary -- there's no evaluation cycle; I don't have to *figure out* what the other guy (who might be from a neighboring state with a vastly different accent) *even said*, before I can start figuring out what he meant. Everyone involved did all that work already, before going into the field.

Their evaluation was "brevity codes are bad".

Fight Leukemia
They knew what they were doing because there is no standard for brevity codes. That means different jurisdictions don't use the same codes. Put a collection of people together from a wide area, and they won't be able to communicate using brevity codes. Consequently, one person is saying 10-33 for "help me quick," and the other person thinks it means "disregard." APCO codes are also different from Ham codes. The codes are OK if Hams are talking to Hams, or the East Podunk PD is talking amongst themselves.

So the solution to that is not to get rid of brev codes. It's to *create one from scratch*, and promulgate it to all comers.

Fight Leukemia
A standard? I'm not sure that's possible among local government agencies, and states and the feds are loath to force anything on them.

Given all the things you do for a living, I'd have thought you would have a different opinion of the Feds' ability to impose standards on people...

With emphasis on interagency, on site disaster communication, one would think a common language would be part of the communications system.
"We’re in this period now when you can’t even write about bad behaviour because it might seem like you’re condoning it." - Ethan Hawke

With emphasis on interagency, on site disaster communication, one would think a common language would be part of the communications system.
Click to expand...

It's not clear whom you're spanking, Tim. Only that you are.
You must log in or register to reply here.