Fight Leukemia
Who made me and when? 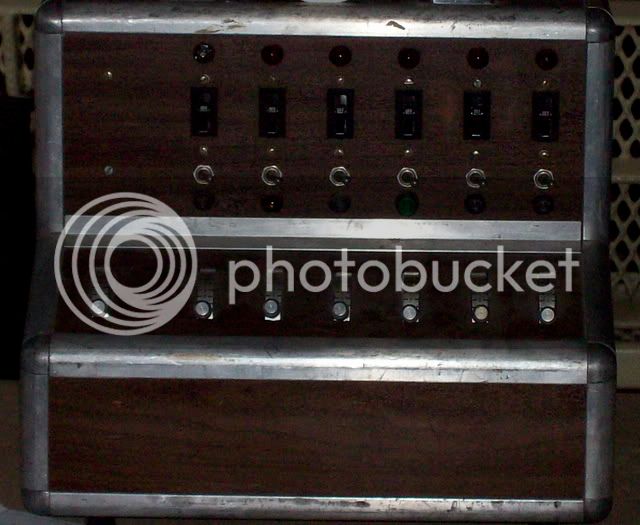 Premium Member
EEK!!! had one of those in my closet at my apartment for years!!! IT was a left over for my old theater - it's first light board in the studio. Threw it out when I moved as it was useless and needed a bit of work. You didn't garbage pick it did you?
S

Actually I do remember this unit. Cannot for the life of me remember who's it was.

SB
Steve B.
"Read it again, before pressing Send"

CB Mods
Premium Member
Not sure but those fader handles look awful "Kleigel - esque" to me.
Van J. McQueen
Technical Designer
Stagecraft Industries, Inc.
"The only Dumb Question is the one you don't ask."
All opinions expressed here by Van J. McQueen are his and his alone, and do not represent
the official opinions, positions or Values of Stagecraft Industries, Inc.
So there, Nyah!

ship said:
You didn't garbage pick it did you?
Click to expand...

Absolutely not, our lighting guy got in about 1980, that's really all we know.
It only has one bad channel.
It is currently out working on our Shakespeare in the park series.
Philip LaDue
Staging Supervisor at NYC Mobile Stage.com
Entertainment Freight Broker

avkid said:
Absolutely not, our lighting guy got in about 1980, that's really all we know.
It only has one bad channel.
It is currently out working on our Shakespeare in the park series.
Click to expand...

Not to be picky but I need to correct your grammar that last sentence.

It should read: "It is currently out threatening to electrocute everyone who attends our Shakespeare in the park series... and burn down the park too!"
Don't worry, I've screwed up bigger shows than this!

All it needs is a chance of rain baby!!!
Don't worry, I've screwed up bigger shows than this!

gafftaper said:
All it needs is a chance of rain baby!!!
Click to expand...

That is not real wood, it is contact paper over the aluminum.
It's perfectly safe, all grounded outlets and inlet.

There may be somethings that we are, but unsafe will never be one of them.
Philip LaDue
Staging Supervisor at NYC Mobile Stage.com
Entertainment Freight Broker

gafftaper said:
All it needs is a chance of rain baby!!!
Click to expand...

It downpoured last night, the only ill effect of the rain was my having to wipe down cable and the speakers.
Philip LaDue
Staging Supervisor at NYC Mobile Stage.com
Entertainment Freight Broker

This board was manufactured by Kan-Tek, around 1978. Only a few were built, and most of them went to the rental inventory of BASH in New Jersey. I believe a guy named Hal Denman was the principal of the company. They didn't last long at BASH, because they were very unreliable.
Its construction was fairly frightening: The chokes were lumps of iron covered with what looked like Johnson & Johnson white bandage tape and wound with a few casual turns of #12 THHN. The "master" drove a small incandescent light bulb that had 6 photocells grouped around it, which provided isolation between the mastered dimmers.
The wood-looking stuff is actually wood-grained formica.
If I found one, I would not turn it on indoors!
Steve Terry

Fight Leukemia
Steve, you're my new hero.
We've been scratching our heads for years on this subject.

You wouldn't happen to know any company history on Kan-Tek would you?

avkid said:
Steve, you're my new hero.
We've been scratching our heads for years on this subject.
You wouldn't happen to know any company history on Kan-Tek would you?
It appears BASH is still in business:
Bash Lighting
3401 Dell Ave.
North Bergen, NJ
Click to expand...

Perhaps you're thinking of 4 Wall, which is run by the former owner(s) of Bash - Bob Cannon, among them.

SB
Steve B.
"Read it again, before pressing Send"
S

It's not real wood - it's shelf lining in the appearance of wood.

Back to the garbage picked light board, nope mine had at least two channels not working and some busted indicator lights. Always had the dream of using the very much quality 2.4Kw dimmers for analog controlled dimmers. This on this pack is feasible and by way of analog to DMX converter is also possible to make a kind of 6pack slave to computer controlled dimmer pack. Was feasible, got tired of lugging the boat anchor about on the other hand.

Brand... Don't know myself, thought I knew but I don't. Here is what I have on it out of my former theater's inventory:

Oops, NPT theater, they did pay my old theater like $60.00 for it when we sold off our gear. That was on the premiss that I would fix it for them. NPT still exists as a theater, this dimmer don't. It's a fair deal in some way anyway, we were sister companies more to their advantage than ours in some ways by way of loaning or giving them stuff. This much less my help with them way back when. Hope they upgraded some of the stuff they had back than - very scary, much less remember to duck in the basement.

None the less, that tape would be fiberglass electrical tape and perfectly acceptable. Really did figure out how to analog control this dimmer system remotely at some point. Probably in the end cost more than it was worth. Still, fix the dimmer(s) that are bad by way of sending it in for qualified repair/service & it would make a good student/rehearsal hall dimmer pack that's safe for the civilians and or directors to use. What's wrong with a one scene board anyway in other than show conditions?

This dimmer pack as I remember it was very solid state in not much to really go wrong or go wrong. Fix what's wrong and it will last another 30/40 years for doing what it is in doing. I would if I still had it feel it safe after a good going over. Kind of wish I didn't throw it out these days as it was an antique and I might even use it these days for a specific purpose.

Still, in the end by way of solid state engineering, real heat sinks etc. for this dimmer, one could go Dove 2x6 during the day and even these days, I'm sure or with something like this that's I think safer even if ancient in engineering and often questionable methods or ways of doing the simple. Much more rated capacity and symplicity on this thing even if something that's standardized parts Frenkenstein in light board. Much less chance those that power into it will thoroughly overload it by way of larger fuse installed. Been there, done that really wish I didn't throw it out. 100% thinking that this light board is safe for use by those that don't know how to use light boards/dimmers and or for a rehearsal room/class room. Add a fan perhaps as if I remember correctly it didn't have one. So much that could be done with this base unit if one has time and money.
Last edited: Aug 14, 2007

Hummm.. Suspect that might be a typo as six 2.4kw autotransformers would weigh in excess of 200 pounds. (Also, there would be no need for the chokes) If it is solid state and if it actually did have a light bulb and six photocells inside it, then chances are it is using diac/triac phase shift dimmers that have no isolation and could not be operated by remote. (basic wall dimmer design) I know Times Square put out a lot of that kind of stuff in the late 70’s. Somewhere, in the back of my mind, I think I have a late 70’s BASH catalog with a picture of it in it. I will look around and if I can find it, will give it a scan.

PS: The first dimmer board I built was in 1968 and had four 2.4k Autotransformers! And I wounder how I blew my back out at such a young age!
John Dziel (Retired)
DAE Concert Lighting
"Oh, that switch also fed the Hotel ?"
S

Premium Member
Hmm, weighed in the 40# to 100# range. Do remember some study of the pack but not much - alien technology from the 1970's sounds good. Perhaps there could be a photo taken of the gizzards. Is it as a concept capable of doing by way of plug in remote this dimmer pack or what's making it up and how is it done?

[Always had the dream of using the very much quality 2.4Kw dimmers for analog controlled dimmers. This on this pack is feasible and by way of analog to DMX converter is also possible to make a kind of 6pack slave to computer controlled dimmer pack. ]
I do not recommend this approach. If I recall correctly, the control circuits on the Kan-Tek product operated at line potential, without transformer or opto-coupler isolation. That is why the master used the curious light bulb/photocell arrangement to provide isolation between dimmers on different phases.
You DO NOT want to connect any external control equipment to this pack.
Frankly, from a safety point of view, I suggest it's time to retire this piece of equipment. You won't find a UL listing label on this gear, and there's a good reason why.
ST
You must log in or register to reply here.

Anastasia... just because you can, doesn't mean you should?