So I am attempting to create the most vivid, realistic, clear Pepper's Ghost effect. For my application, I want the image of a projected person to appear as a real brightly illuminated person standing in front of viewers . I believe the following factors are helpful including keep the set as dark as possible. Secondly attempting to have the reflective surface on which the image is to be projected to fill the field of view of spectators so that the edges of the reflective surface are not seen and any differences in transparency of the surface and the areas around the surface are not detected. Having a bright projector I assume will increase the vividness of the image. I am wondering if placing some transparent projection film
on the reflective surface would help or hurt the effect. The film will likely add some haziness to the reflective surface, but at the same time should greatly increase the vividness and color of the image. Here is a link to of the projection film I am thinking about and the attached photo shows an image projected onto this film: 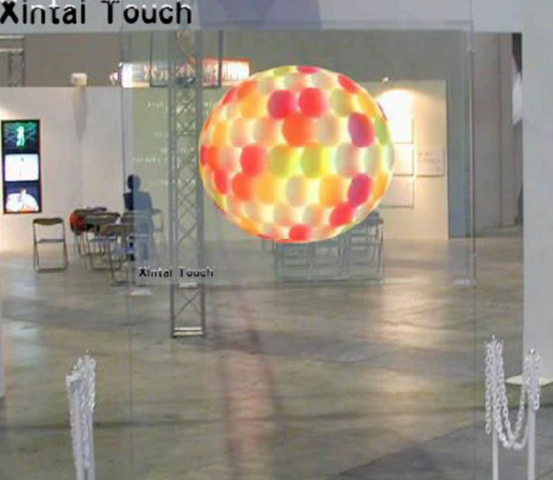 The film will likely add some haziness to the reflective surface, but at the same time should greatly increase the vividness and color of the image. Any advice, or experience out there? Thanks!!
T

So I am going to try the following rig using a polycarbonate flat sheet big enough to completely cover the entrance to the room, with the clear rear projection film applied to the sheet on the Inside-side of the sheet, and using an ultra-short throw projector that will be placed on a stand off to one side of the sheet and out of view of spectators as shown in the attached crude diagram. I definitely believe this will work, although I am not sure of the best film to use. There are various colors of projection film that can be used from the clear film to virtually black film. According to the manufacturer of the film shown above, the dark gray film provided the best quality/color image, but the clear film will give more of a holographic effect if things of the interior of the room are visible.

The advantage of this rig over the Pepper's Ghost approach is that in the Peppers Ghost effect you are projecting onto an approximate 45 degree angle and thus will get some image distortion. Further the longer throw distance using a conventional projector makes projector placement more difficult. Since the polycarbonate rig shown can be used for either the Ultra short throw projector, or the Peppers Ghost illusion using a standard projector, I can actually test both approaches and see which works best. 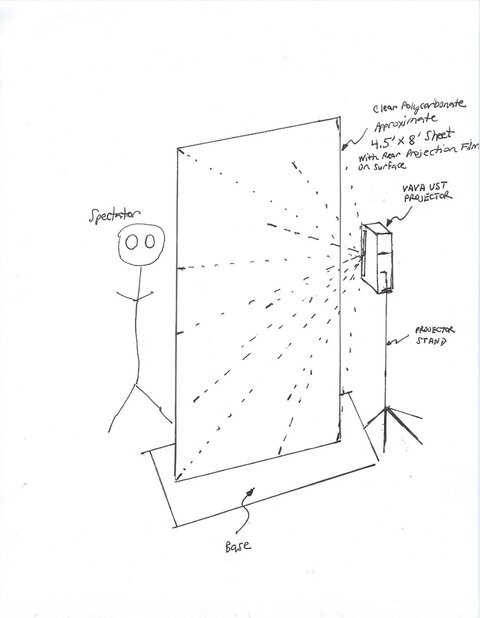 Here is a further update on the equipment setup. Still need to mount the 5' x 8' Lexan sheet with holographic rear projection film applied.

This looks very cool. Where is this? I'd love to take a tour when its done
T

Is that a Time Traveler cabinet I see? Great game to take inspiration from on this project! Is this in a home? What's the end goal here? I'm very interested to see how this develops
T

Yes that is a Time Traveler game you see. This is my home theater room inside the Tower of Terror Theater exterior set. There is also a Twilight Zone pinball in the room as well. I am trying to replicate the look of the Tower of Terror Basement elevator ride at Disney, and also, and perhaps the main goal at this point is to expand on as many high quality special effects as my imagination and budget can provide to recreate and expand on the back story of the Tower of Terror ride. I am now attempting to hire a deep fake expert to use colorized video of Rod Serling from the Twilight Zone TV series to digitally modify it so that it will appear that Mr. Serling is speaking the custom narration that Mr. Silverman (voice talent used for the Disney ride) recorded for me. This custom deep fake video will also be used as a hologram projection seen inside the "elevator doors," prior to the planned special effects to go along with special effects representing the viewers travel to the Fifth Dimension in the Twilight Zone. Going to be hopefully recording the Bellhop video for the holographic projection after Christmas.

Latest test with the rear projection "holograph," projection using a rear projector onto a 5' x 8' sheet of Lexan with rear projection film applied. The rear projector "hotspot" is not as bad as I thought it may be, and there is much less reflection of the image from the lexan surface onto surrounding surfaces compared to the ultra short throw projector, so I may opt just for a rear projector. Just as an update, attempting to negotiate the Rod Serling deepfake production with a SFX artist experienced in Deepfake videos. I think it will get done. The programming for the special effects sequences, and audio and video integration continues and progressing.