I have read various tool posts that mention the awesomeness of Electrician's Scissors and it seems a lot of CB members carry them. I have seen them in stores, but I don't see what is so great about them. Anyone care to enlighten me? I have some cash left on a Home Depot gift card that I would like to spend on something useful.

The teeth have a very fine serration, making them very sharp. Great for cutting zip-ties, tie line, and a multitude of other things.
T

another benefit, i find, is for cable stipping and rewire work, its pretty much an all in one tool!

I use them all the time, but then again I worked in the communications industry were thats pretty much all you use. To me they are pretty invaluable, especially working with data cable. Ideal makes a decent pair, klein makes a really nice pair. They are expensive, but hold up extremely well.

Side note.... I used to use electricians scissors when I was in grade school because my father used to get them for free (he was an IBEW electrician for a number of years before getting hired on to management).... So I was using these things when I was 6 when everyone else has junk plastic scissors, mine could cut through just about anything.
C

Would you all say that elec scissors would be better than a pair of dikes?

Thanks everyone. I think I will pick up a pair, when I have a chance.
H

I used to be a paramedic and we had shires that would cut through a penny were very light weight and tough as nails. Does this sound to be the same item as "Medic shires"?

hsaunier said:
I used to be a paramedic and we had shires that would cut through a penny were very light weight and tough as nails. Does this sound to be the same item as "Medic shires"?
Click to expand...

I have several pairs of those sitting around.(my dad was an EMT for 25 years) 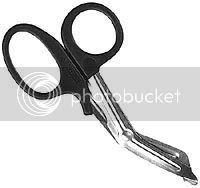 OK. Wander if the medic shires would be a workable alternative? I think you can get them for $10.00 or so.

Be aware when you get these that your dressers WILL yell at you because they think you are using tailor points.... and the get upset.... though its fun to tell them that you are.
S

Will cut thru a 12ga stranded wire (not persay cable) but it would also wear on the pivot point of the scissors. The scissors are great and cut from a gobo to kevlar without a problem when sharp but not magical and if you find a need to use the entire hand as opposed to two fingers to cut something you are probably abusing if not the blade, that pivot point which will wear and potentially loosen up at the joint even more so than the blade.

Once dull they most likely are not worth sharpening, get a new pair for like $14.00. Really good price and valuable scissors for any number of materials. They don't cut hair or fabric so well - different blade angle which is important in why they work better for most work but not perfect for all stuff. You will note that a Swiss Army Knife will seemingly cut paper better than electricians scissors - that is attributed to the blade angle, though electricians scissors will cut paper fine for the most part.

One big thing no matter the brand is a problem with that pivot. Normally it is a screw that should be able to tighten some but normally it does not nor should it unless you wish to constantly have to tighten it. At times the screw itself or the hole it fits into does not properly fit and there is some play between blades. One of my assistant's scissors is like that, kind of have to squeeze/twist the blades together as you cut type of thing like with child like safety scissors. Drives me up a wall. I will have returned them - and most brands of electricians scissors have a full warranty on them. If they were tight but loosen up over time return them or an anvil pin punch and mini sledge hammer should allieviate that play. Tightening the screw does not work so well - see above but could dependant upon the brand. If you find the scissors binding and sticking a bit, clean them with a adhesive remover such as Goof Off or Goo Gone, if not oil them with WD-40 which will also to some extent remove goo as with lubricate them. Should solve the problem unless dings in the blade. If dings in the blade, a file on the flat side filing the ding flat again should solve the problem without attempting to resharpen. Fairly rare you will ding or kink your blade given the angle of it somewhere between that of fabric or hair scissors and paper scissors but possible especially if you try to cut say 1/16" wire rope that is also theoetically possible but not proper. Sure as with 12ga cable you could but it would be wrong and potentially do damage to the tool especially at its pivot.

The cut angle and strength of the scissors is the main selling point. There is a high leverage version also available - same basic thing just with multi-finger handles. Yet to try them, see rule one about able to cut but getting too ambitious about what you cut. A good pair of diagional side cutting pliers for cutting wire amongst other types of wire cutters would be easier and proper. There is no all in one tool. Proper tool for the proper job. Me being a Klien person for most tools like the scissors with the wire stripper slots on them - yet to use the stripper slot for other than telecom but they just traditionally just seem to hold up better than the ones without even if the same in my impression.

For side cutting pliers, a good Journeymen D2000-48 that are hardened steel, 15 degree beveled edge will last you years longer than any other brand or type. Well worth the about $25.00 investment. Once dull you cannot resharpen sufficiently this tool so buy something that is sharp and properly aligned to start with and will stay sharp for years no mater what you are cutting with them. Again seeing concepts about cutting what designed for. In this case wire, screws and steel plate without a problem is fine. Handle type as similar to a few more modern style of handle out there also holds up better than the old vinyl coated handles.
You must log in or register to reply here.