Just got on the Floor and I found this cool new toy from TMB. It comes in 25lbs and 35lbs. Perfect sand bag! So new he didn't have pricing on it yet. Check it out in booth 11841 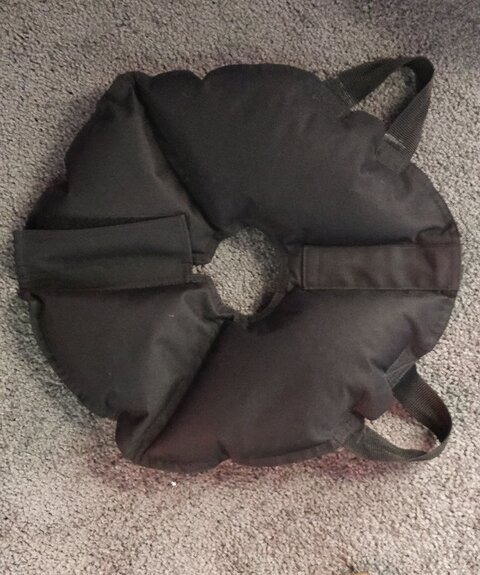 Had a nice chat with the guys from Altman about their AFS 500 LED follow spot. It was introduced at LDI, but I didn't have a chance to get my hands on it. It's a really nice option for a small to medium sized venue like a high school, community theater. It's 490 watts. And really bright. 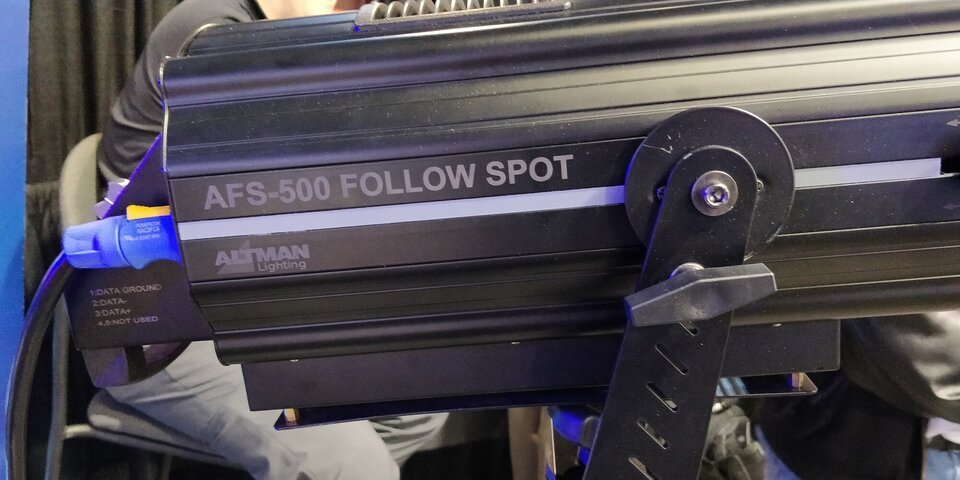 I was looking at it shooting over 100 feet to the wall of the convention center. On the side of it you have traditional zoom (7-13 degree) and focus knobs. It weighs 37lbs including the base. 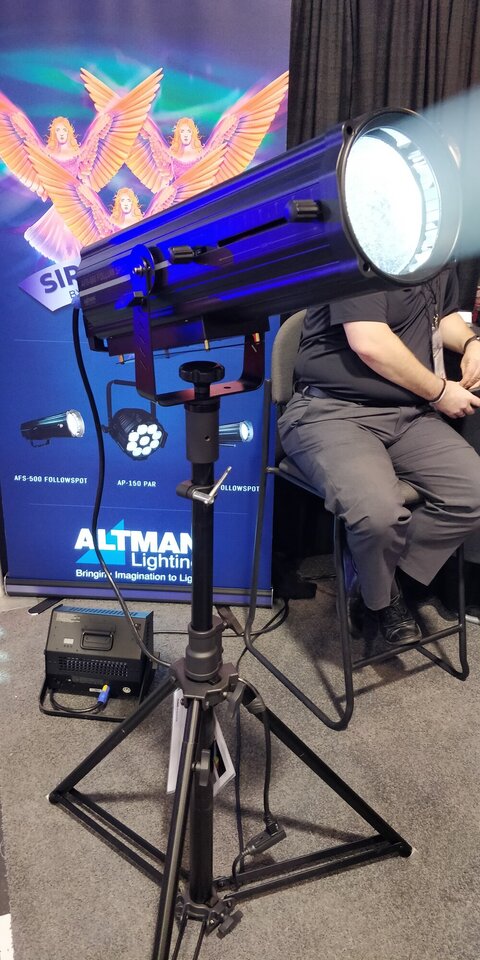 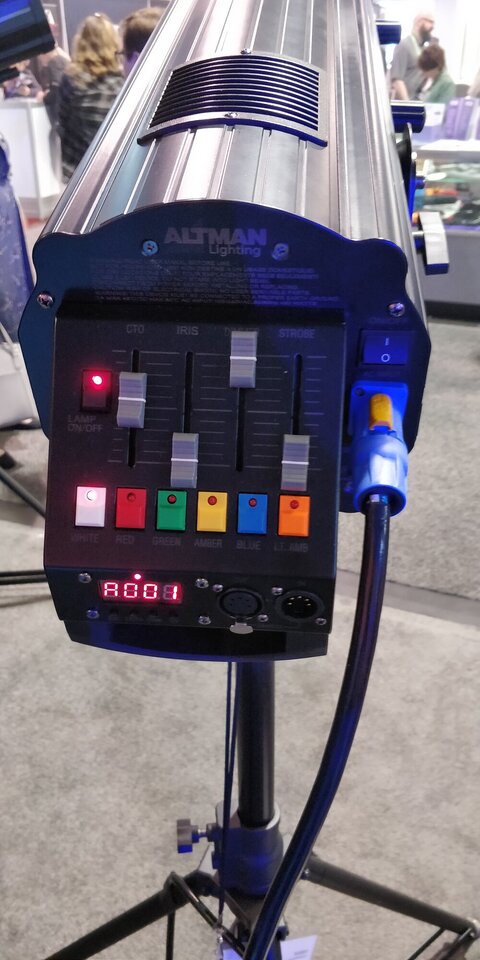 On the back you'll find a digital controller with variable CTO, fade (nice and smooth), iris, strobe, and preset colors. It's also DMX controllable. Imagine two of these focused by volunteers or students but the on/off fades, the color, and iris all run perfectly synchronized by the light board.

Our buddy @Ford hosted a session on lighting, the future and the difficulties of adapting and changing. The panel included Richard Cadena and two others... What were their names Ford? Sadly, I forgot to write them down. It was a delightful conversation of smart people sharing ideas about gear and how they design and program lights. A great example of how NAMM is not just for the noise boys.

Had a chance to spend some time with @What Rigger? yesterday and today it was @Rob, @rsmentele, @Ford and @egilson1. The best part of these conventions is seeing old friends and making new ones. 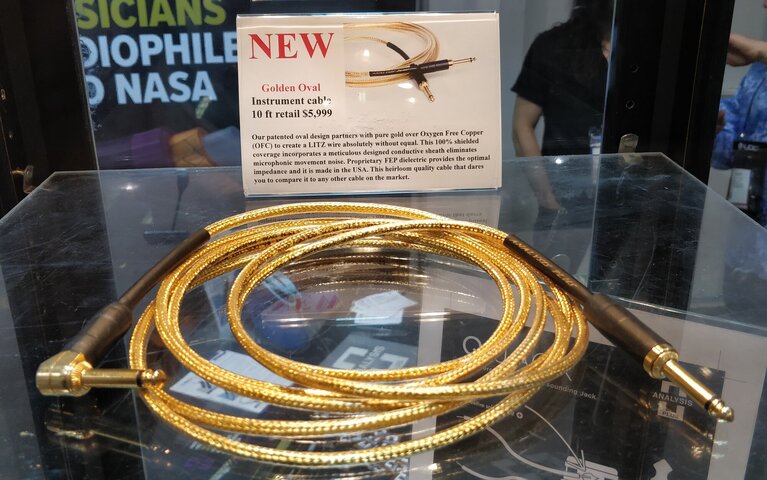 @gafftaper How many did you order? Is there a discount or a premium for 50 footers?
@Footer If they're available in 75 "footers" can we count you in?

How much video (LED walls, projectors, etc.) is present?

So today we checked in with our friends at Gig Gear... Need some gloves? They are the best!

And Steven from Entertainment Fabrication. He's got some really creative products. His boom bases are the best. He's got these brackets to install wheels on a wood platform that I just have to order. And some clever ideas for putting legs on platforms.

I got lost in instrument world for a while... Drum hall, strings hall, guitar world... It's nuts down there. I heard a heavy metal harp! Check out her pedal board! 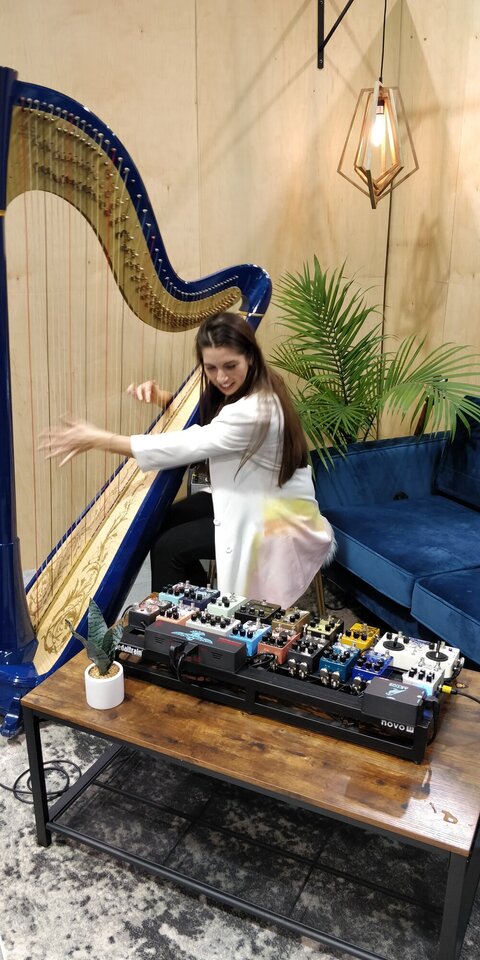 After that we went into Audio land. Mackie has the new SRM V series. It looks like a great refresh to an old friend. It's got a little 4 channel mixer on the back, blue tooth, 1/8" Aux in, and a variety of EQ and processing options.

Sennheiser has a cool protype mic on demo with the most amazing tight off axis rejection I've ever seen. It's really sweet in the center. The expect it to end up around $300.
Last edited by a moderator: Jan 20, 2020

There's very little video... The DVS one and I are not really sure if there was any... I'll give you an update tomorrow.
Last edited by a moderator: Jan 17, 2020

Well yesterday did not go as expected. I started the day going to a class on lighting system design for house of worship. It was taught by Daniel Connell who does lots of big church system installs in Texas. There's a whole track of HOW tech and I wanted to check it out. The class was really good and had a lot of great ideas that would apply to schools and small theaters too.

Over in the convention center's arena they have this great speaker shoot out set up. There are about 14 companies set up with a line array and a smaller speaker option. You stand in the middle and they play the same 20-30 seconds of a song on every system one at a time. It's so amazing to be able to hear exactly how all those speakers sound side by side.

From there the day went a bit sideways as CB's benevolent dictator had a minor medical emergency (Dave's fine, although I was accused of plotting an assassination). The night ended great at the NAMM TEC awards hanging out with @egilson1 and @Ford. There was a tribute to Don Wilson (guitarist for the Ventures). Three legendary guitar players: Elliott Eason (The Cars), Skunk Baxter (Steely Dan and Doobie Brothers), and Steve Lukather (Toto) played a medley of Ventures surfing songs. It was a fantastic way to start the show. The evening ended with a tribute to Joni Mitchell as she received the Les Paul innovation award. The thing that most amazed me was that Joni had polio when she was 9. This left her finger mobility impaired the rest of her life. Later on when she was writing music, she would hear these complex jazz chords in her mind that she couldn't physically play. So she designed her own guitar tunings to make it possible for her to play the notes she imagined. That's awesome! Joni was looking a bit frail but the house roared in cheers and there were many misty eyes at the inspirational tribute that followed.

Got back to the Mackie Booth for a demo of the new SRM V-Class. The Bluetooth connection is both fur streaming audio and also for mixing and control via an app. They've done a lot of cool stuff with the on board DSP and the sound is very good. It's, clean and crisp on top, the mids are warm but not muddy, and has a lot of nice clean bass. The 15" without a sub is surprisingly strong on the bottom end. With a couple of subs and really cranked up, the 15" model especially was well worth your consideration.

No manufacturers. Just a few booths of dealers who sell video walls.

I made it down to the basement where there are always some odd items... 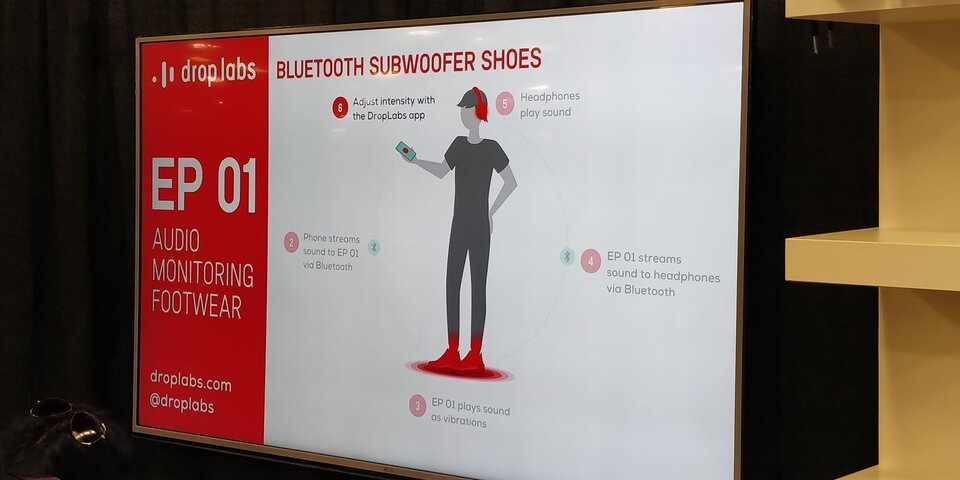 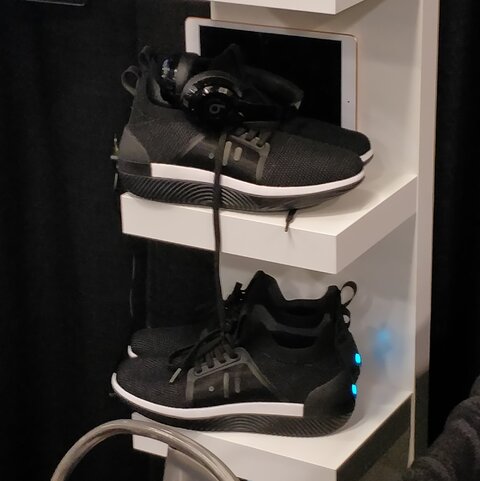 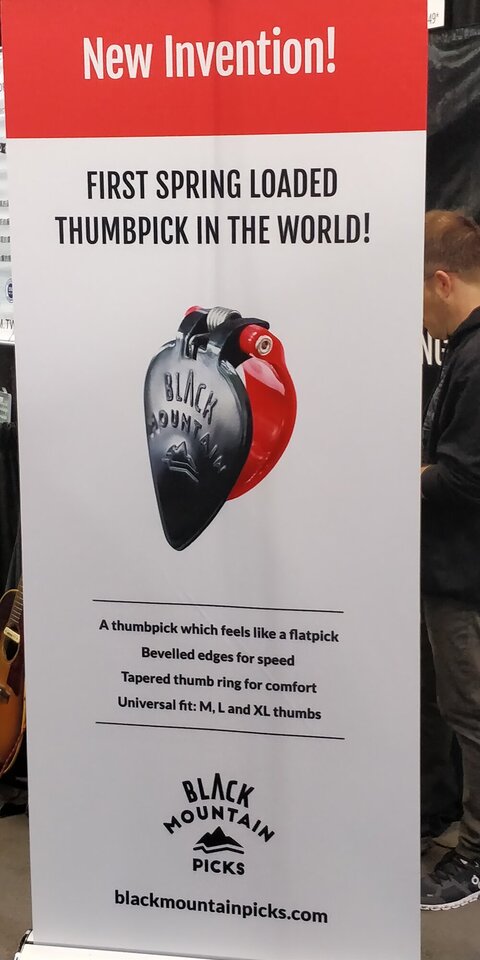 And an e-sports booth that I couldn't figure out what they were selling... 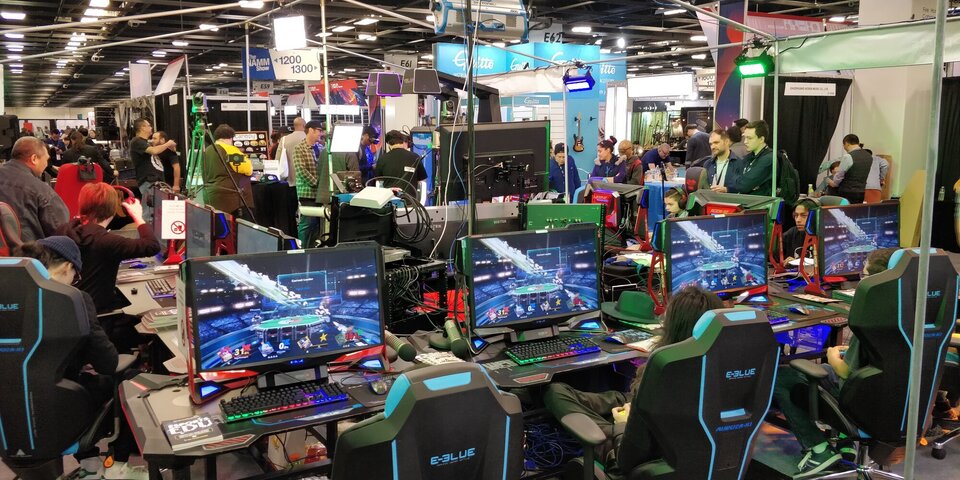 So you can leave it behind in a studio or on a stage somewhere and never see it again while the person who grabs it has no idea they should pawn it.

gafftaper said:
I made it down to the basement where there are always some odd items...

And an e-sports booth that I couldn't figure out what they were selling...
View attachment 19184
Click to expand...

We like the shoes, the shoes that go "boom". 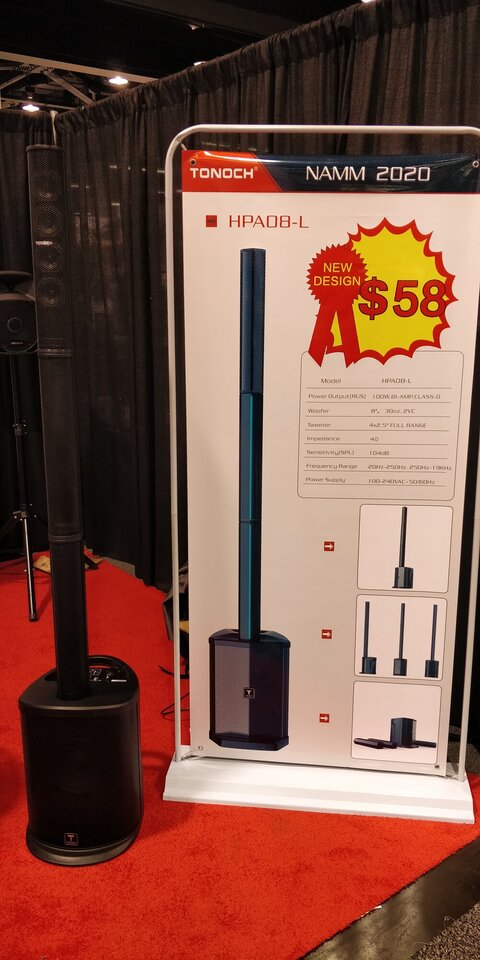 For when 88 keys is just not enough 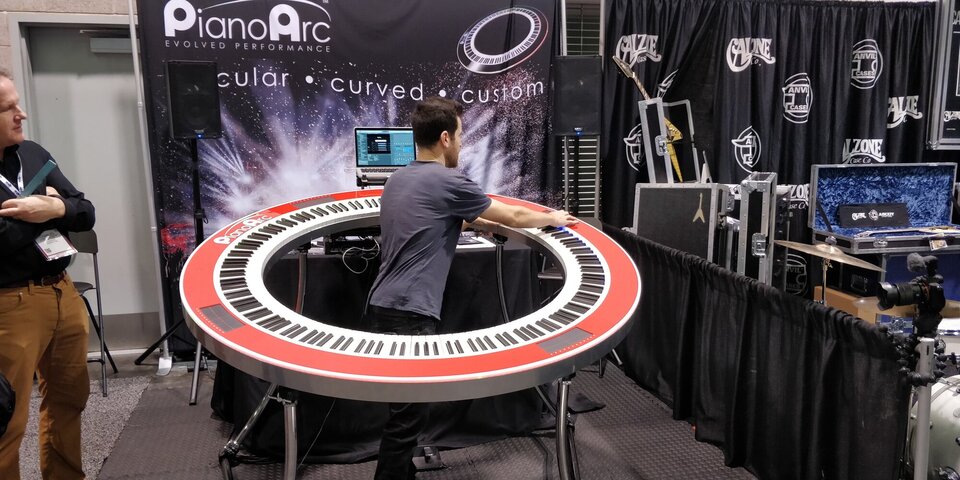 Pro Co has a cool wireless IEM set coming out soon. It's the WIEMS. A 5.6 ghz WIFI connection with about 150' range. 6 hours of battery life or plug it in to a USB charger. List $399...probably selling for around $350. Very cool simple product. The demo sounded great. 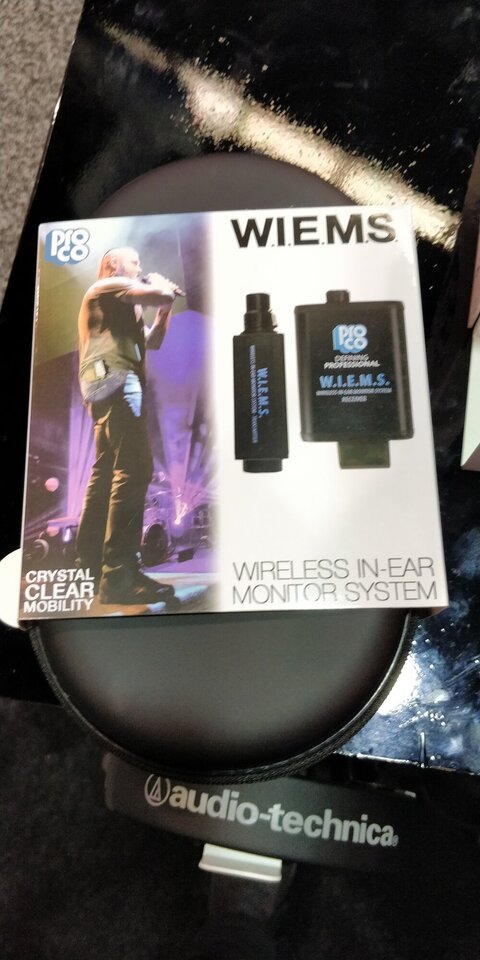 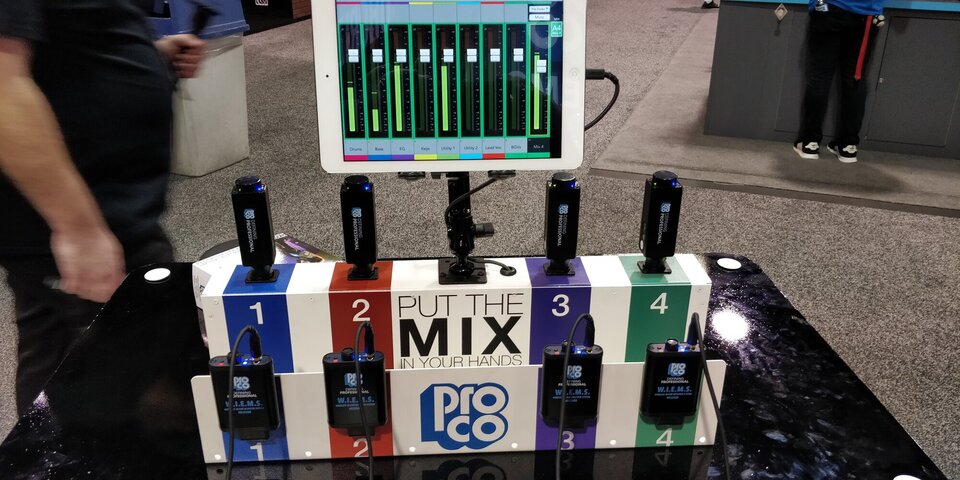 K Array had this amazing product! It's a speaker in flexible sections about 5 feet long and 3" in diameter that daisy chain with speakon connectors. The sound was amazingly high quality for such a small item. The audio in my video does not do it justice. I have no idea what I would do with it, but I want it!

gafftaper said:
K Array had this amazing product! It's a speaker in flexible sections about 5 feet long and 3" in diameter that daisy chain with speakon connectors. The sound was amazingly high quality for such a small item. The audio in my video does not do it justice. I have no idea what I would do with it, but I want it!
Click to expand...

Ideal for listening to some tunes on the road when you convert a bendy bus to tour bus duty!

gafftaper said:
K Array had this amazing product! It's a speaker in flexible sections about 5 feet long and 3" in diameter that daisy chain with speakon connectors. The sound was amazingly high quality for such a small item. The audio in my video does not do it justice. I have no idea what I would do with it, but I want it!

Here is the product link. It's the K-Array Anakonda https://www.k-array.com/en/products/line/anakonda/
You must log in or register to reply here.