Musical time! This year it's Grease. What have you used for the car "Greased Lightning"? We have a golf cart to dress up...this would be a last resort at best. Any creative ideas? Yes, a full size real car would be stellar, but no can do...real car parts yes....help!
G

Platform with wheels, car parts built on top of that?
Metal frame in the middle?
last time I did the show we just went ahead with the golf cart idea and added exterior parts to make it look as realistic ( Not possible) as we could


bbullitt said:
Musical time! This year it's Grease. What have you used for the car "Greased Lightning"? We have a golf cart to dress up...this would be a last resort at best. Any creative ideas? Yes, a full size real car would be stellar, but no can do...real car parts yes....help!
Click to expand...

We went to a junkyard, picked up a gutted junker that was from the right period. It happened to be cut in half, which was convenient in that it made it real easy to work on. We ground down all the sharp edges, mounted it on a caster system, attached to the automation system and we had a car. The thing about the car in "Grease!" is that it really doesn't have to do anything. It is in like 3 scenes (greased lighting, drive in movie, and I forget the other, might be the last scene) and really it just sits there. So there is no reason why you can't just push on a junker and push it off, and call it a day.
A

We purchased a car without a back. It was put on wheels, and rolled on and off. For Greased Lighting, the car was USL, at about a 45 degree angle from the back wall of the stage. We shinned it up a bit, lit installed working headlights, and we had ourselves a "Greased Lighting"

Indeed, go to the scrap yard.

I am thinking a utility cart from the school custodian with plywood cut-outs on the sides. It seems simple, but I am thinking there could be improvements made quite easily. Plywood seems to be our building material of choice, but I would like some rounded edges. The general concept would be something resembling a '57 Chevy. Has anyone done Grease?
D

We did much the same as Icewolf. We got and old Packard from the junk yard, cut the back third off, Put it on some giant casters. Gutted everything except the front seats, welded the front rims to a pipe running under the frame. Put some MFL PAR 56s in the headlights, a ferfect fit. Mounted some 3" fresnels up under the dash.
The whole thing rode on a Knife slot that we routed in the stage.

We did much the same, except that we had enough stage space to not have to cut the car in half. We took out the entirety of the engine, welded up the axles so it would only go in a straight line (to get it in and out of the theatre we put the front axle on a dolly) and kitted it out with lights - par56 lamps for headlights, MR16s for indicator lights, ropelight all over it, ministrobes in the cockpit, a smoke machine built in so smoke jetted out from the grille and a fan of pinspots in the back - the thing had an entire 12-channel dimmer devoted to it! When we needed it, a curtain flew out to reveal it and crew hiding behind it pushed it downstage, and hauled it back upstage when the scene was over.
S

We found a guy who had I believe a '53 or '54 Chevy for sale...it was sitting on his front yard about 2 miles from the school. He agreed to tow it to the school (no engine) and let us use it in exchange for an ad in the program (Buy Greased Lightning!). Our backstage doors were big enough to fit the car onto stage. Without the engine, it was easily pushed on and off stage. And after the show he had a list of offers to buy the car! Can be seen here.

PS - check out the "virtual panoramic tour" link near the top of the page.
PPS - I no longer work there so don't blame me for the website!
Last edited: Jun 18, 2009
P

Our local high school in N. Illinois just completed production. I built a wood frame on an EZ-GO golf cart and bent some 1/8" masonite for the body. A canvas overlay was the "old, junky" car, which was removed during a short blackout to reveal glowing headlights and a backlit grille. When the lights came back up, there was the finished car. E-mail me at [email protected] for photos.

I worked on Grease once (I didn't do the car, though) where the it had to be very light, portable and about 2/3 scale (the strangest theatre in the world, remind me to tell you about it some time). They scratch-built it with a wood frame, applied and carved foam and mache covered it with muslin and glue/paint mixture. The end result was. . . meh.
S

The one time I did Grease in High School, a family friend of the director let us borrow one of his classic cars! 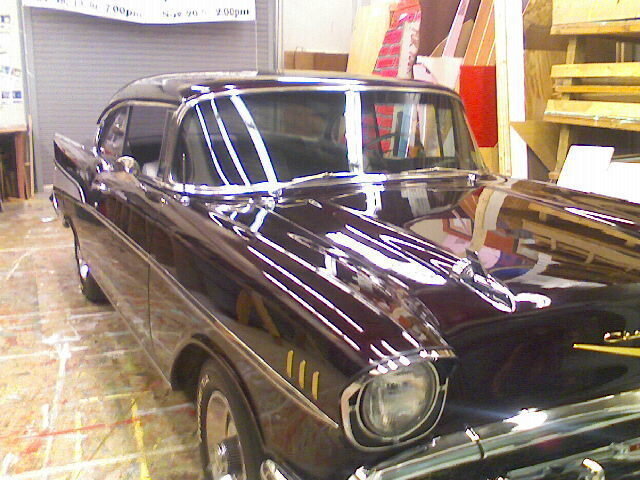 1957 Chevy Bel Air. And guess who got to drive it into the shop and into the wings each night...This guy!

bbullitt said:
Yes, a full size real car would be stellar, but no can do...real car parts yes....help!
Click to expand...

I have done these cars a few times. Given your limitations maybe renting is a good option. We fixed this one up for a local production and it is available for rental. It is a half car on casters: 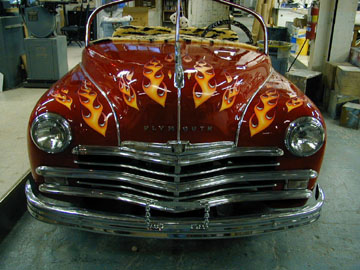 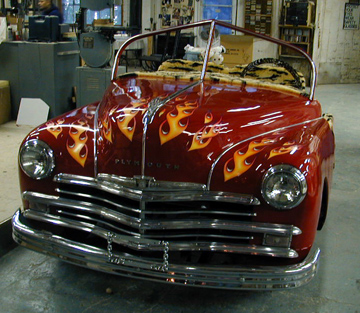 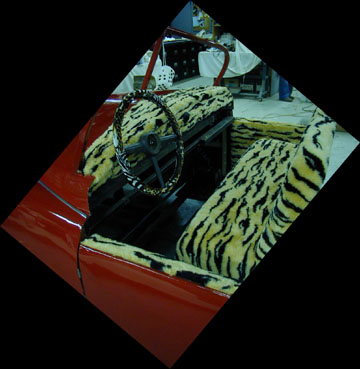 The front end of a car I can help with too. We made some 63 Cadillac front ends for Jersey Boys. These are vacuum formed front ends for which I still have the molds.


Another affordable alternative if you frame them and paint them yourself is to use the Cadillac front end we made for Jersey Boys and add some sort of platform behind it.
Jersey Boys Cadillac
You can call me if interested 845-534-9120.
Last edited: Sep 6, 2011
B

When I did the show we used a golf cart and they drove it around on stage.
M

The last time I did Grease we were on a tight budget. The structure of the car was castered 3/4 Ply and covered with 2" carved styrofoam. To make it choreography proof we covered it with fiberglass and Bondo and then went to a salvage yard and pulled small things like steering wheels, tires, etc.
D

last year my hs did a production of "Back to the 80's" where we needed a car. We ended up actually getting the front half of a car stripped of any internal parts and put that on a wooden platform. Before we knew we could get that we took the platform and cut out the silhouette of the car. Wouldn't look as good but in a worst case situation a good paint job could sell it
S

This is what I built last week for Grease at a high school. Two sides of the car were bad and two were good so that during the Greased Lightning scene all the actors would have to do is rotate the car 180 degrees and it'd go from bad to good! We kept it at a 45 degree angle to the audience at all times to keep the other side of the car hidden.

Build took place essentially over 4, 18 hour days before the show opened. I'm still amazed I got it done!

I see you are near Chicago. Drury Lane OakBrook and the Marriott Lincolnshire Theatre both have real cars that have been used in recent years. I would check with American Theatre Company as well, they just finished up Grease and I bet they have something as well.

TheatrePros said:
I see you are near Chicago. Drury Lane OakBrook and the Marriott Lincolnshire Theatre both have real cars that have been used in recent years. I would check with American Theatre Company as well, they just finished up Grease and I bet they have something as well.
Click to expand...

That part of the thread is over 3 years old, I suspect somehow the production is long over by now...

Chris15 said:
That part of the thread is over 3 years old, I suspect somehow the production is long over by now...
Click to expand...