Hey, I thought we could share pictures of our shows...

Last nights lighting. If only....

We just did Little Woman this week. After a week of rehearsals and two nights of shows, I finally remember to take some pics during the last show. Sorry for the bad angle, trying to take a few pics while I was calling the show(some not so good) 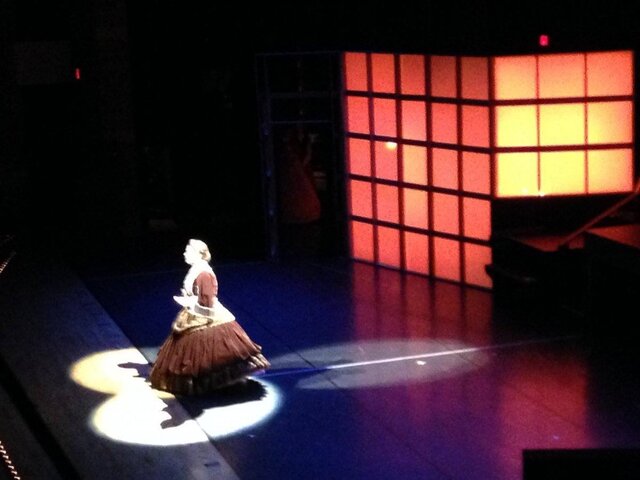 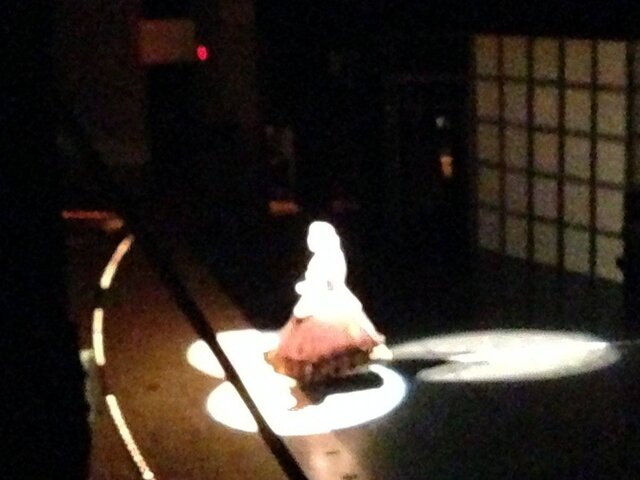 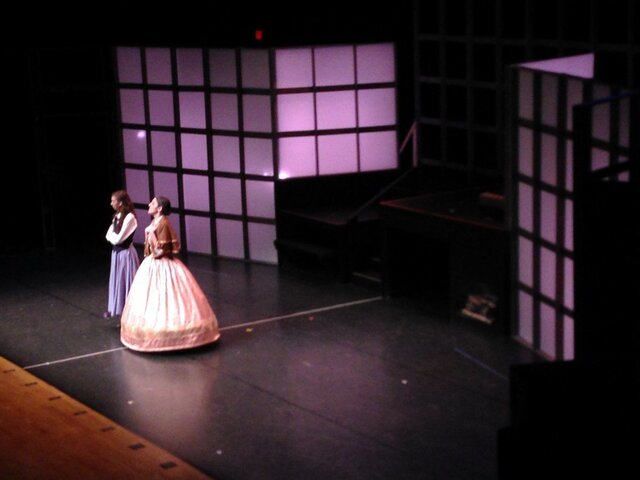 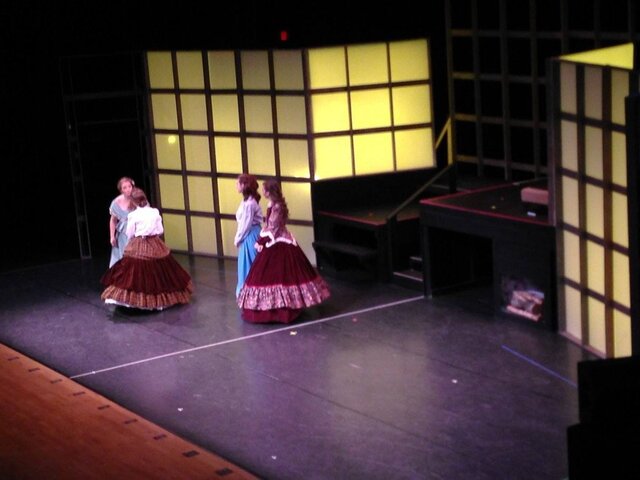 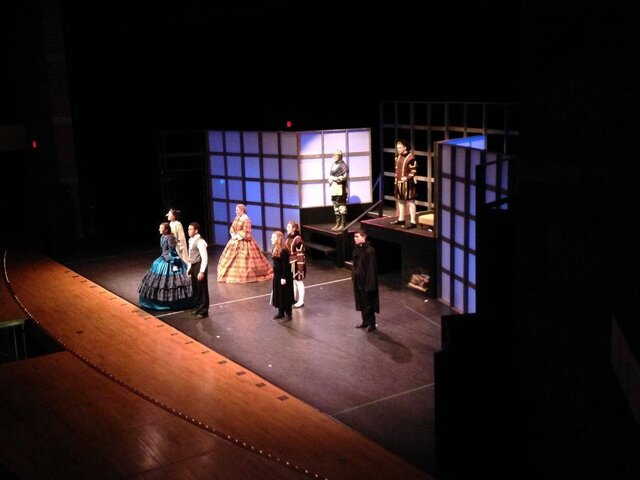 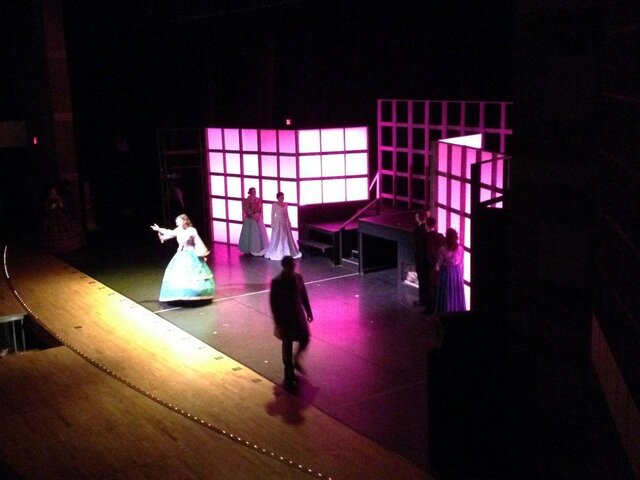 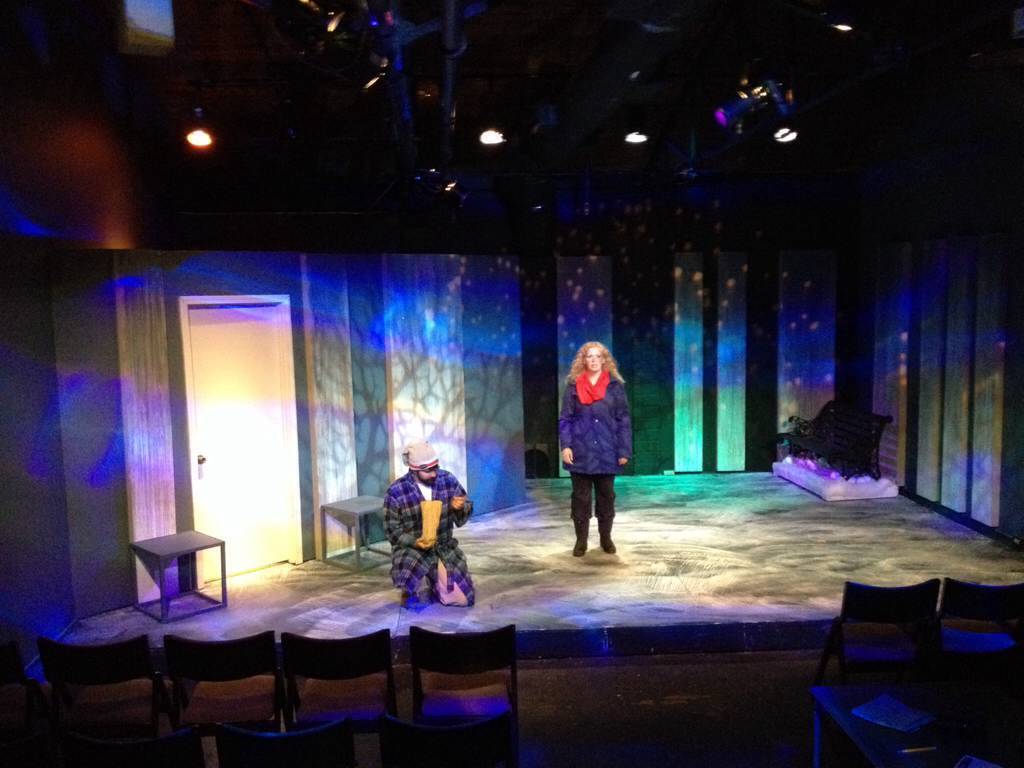 "Any man who afflicts the human race with ideas must be prepared to see them misunderstood." - H. L. Mencken
A

From a production of Metamorphoses earlier this year. Quite a simple set up - except for the chandelier which I had to design and build. Due to limitations of the venue, we had to use sequins instead of water in the pool, which - while being quite annoying for the SM to sweep between shows - looked amazing in the light. Also built custom hanging globes (seen in the third shot) that twinkled to act as a starry background.

Was it a blue tarp over egg crates with sequences on it?
Lighting Floor Technician
AvConcepts Phoenix, Az
(Ron is AND WILL ALWAYS be the Best North of the Wall)
A

Amiers said:
Was it a blue tarp over egg crates with sequences on it?
Click to expand...

We ended up cutting memory-foam mattresses down to size to fit in the bottom of the pool, with a satin fabric over the top to add to the shimmer. That way when the actors entered the pool, it would look like they were actually stepping in to water, as their feet would drop below the surface. The other trick we used was purchasing cupped sequins instead of flat ones, as they caught the light and sparkled better. Flat sequins would have resulted in a flat surface on top.

We had to top up the pool after every run though - so many were kicked out in the more intense scenes and lost! Something like 12kg of sequins were used in the end.

Well it looks pretty cool I will have to put it in my go to book of cool effects.
Lighting Floor Technician
AvConcepts Phoenix, Az
(Ron is AND WILL ALWAYS be the Best North of the Wall)
A

Amiers said:
Well it looks pretty cool I will have to put it in my go to book of cool effects.
Click to expand...

Cheers! I would have loved to use water, but the theatre was on the first floor of a building, so there would have been no practical way to empty the pool after shows. After quite a bit of trial and error, I think the end effect worked out well though! 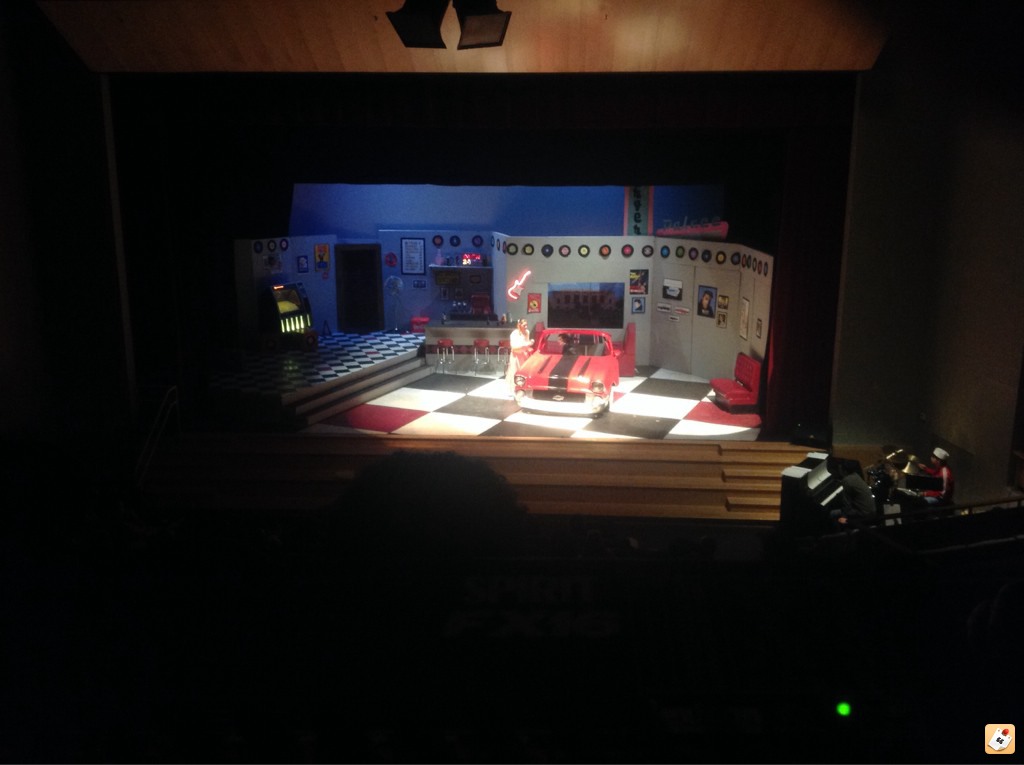 We just finished a run of grease at the school. I'm hoping to have better pictures soon, but it ended up being not half bad. I still hate the show.

Fight Leukemia
Here are some pics from the fall tour I just finished. Its an extension of the tour I was on (and posted photos from) earlier this year with some tweaks. For sidelight, I traded out the dozen TRXs I had on the deck, with 6 auras mounted on 3' pipe. This got my side lights up above obstacles on stage, and the lower quantity helps me fit into smaller venues. I also traded the US mac 250s for auras as I realized I wasn't using the gobos that much and would rather have color mixing and zoom. This change also helped reduce my upstage footprint. Going from 12 TRX and 6 250s to 12 auras actually lowered the amount of truck space I needed and let me just use wall outlets instead of carrying feeder and distro. I used inhouse/ promoter provided fixtures in the air and cloned off of "dummy" fixtures I pre-programmed in MA 3D. On this tour I also traded out their old white drape which they projected on for a new grey one which helped improve contrast of the video as well as made the cyc disappear better for the songs where projection is not used.

"When darkness is there, power to the fixture is not prevailing"

Here are some pictures from a showcase I designed and SMed at school.
The Diviners 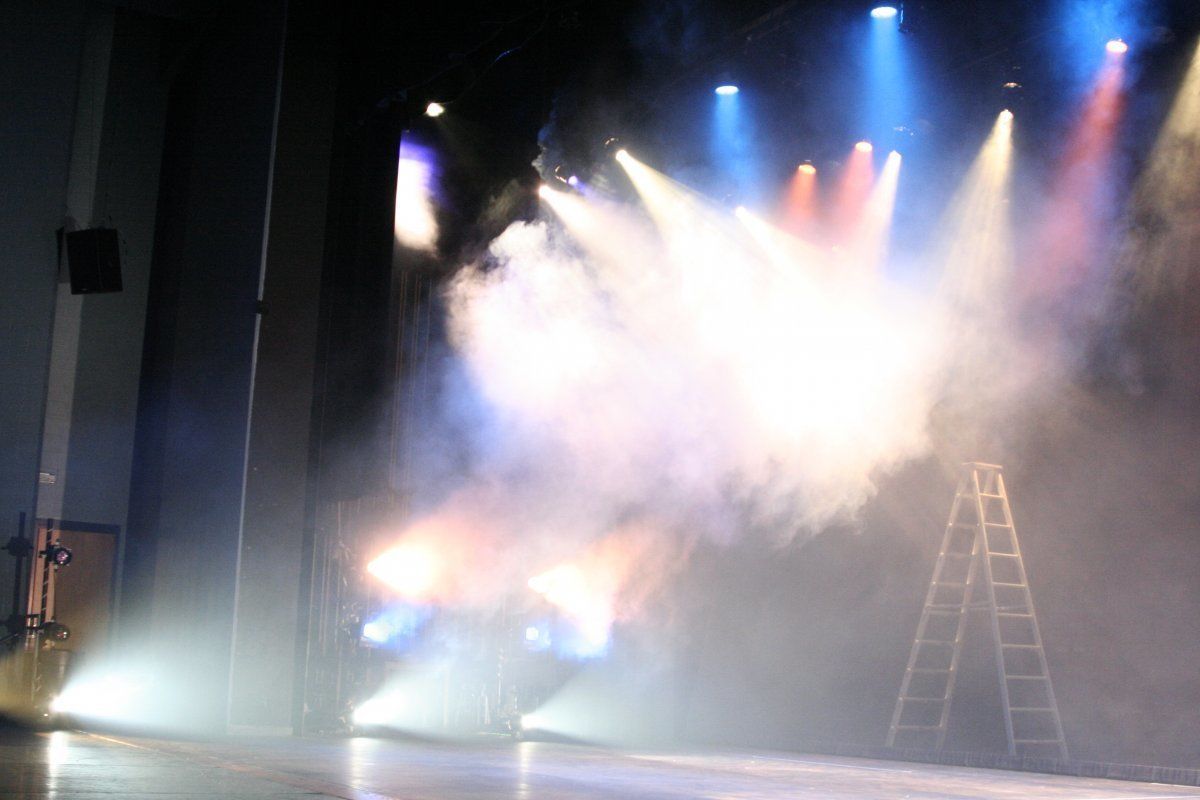 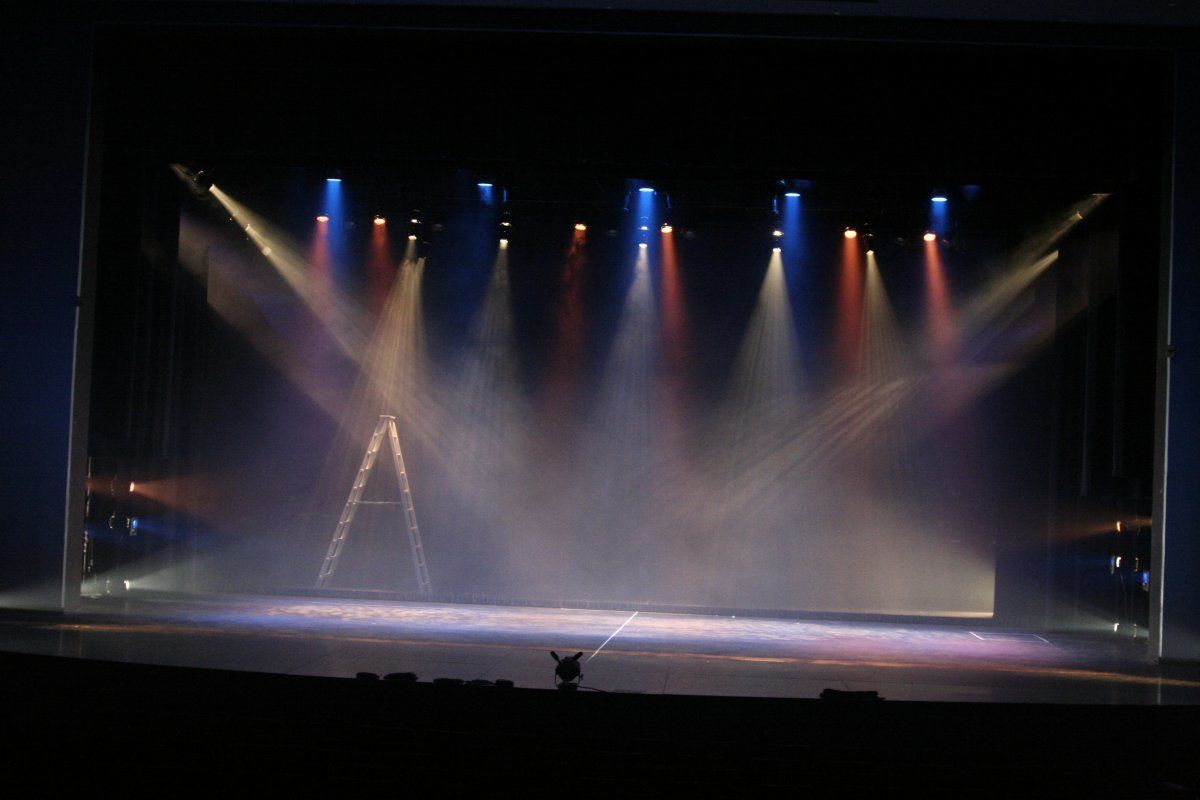 The Diviners with Scrim and Reveal 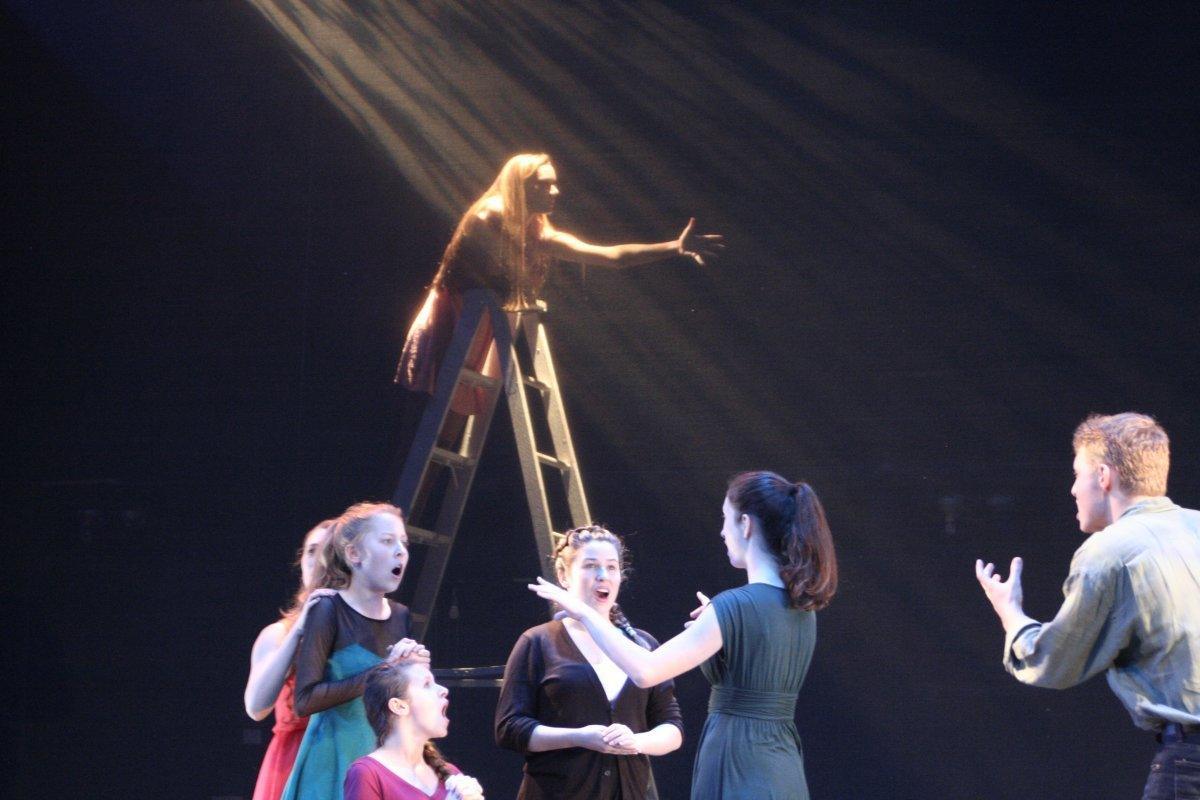 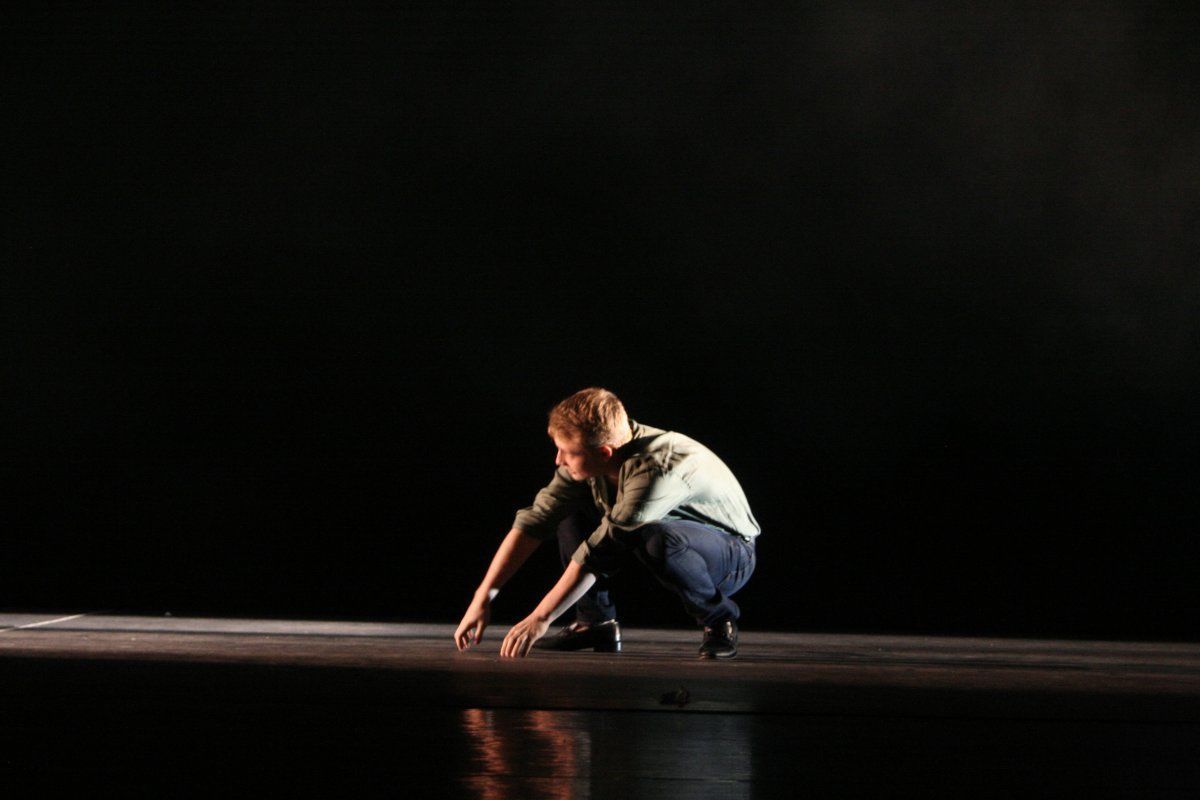 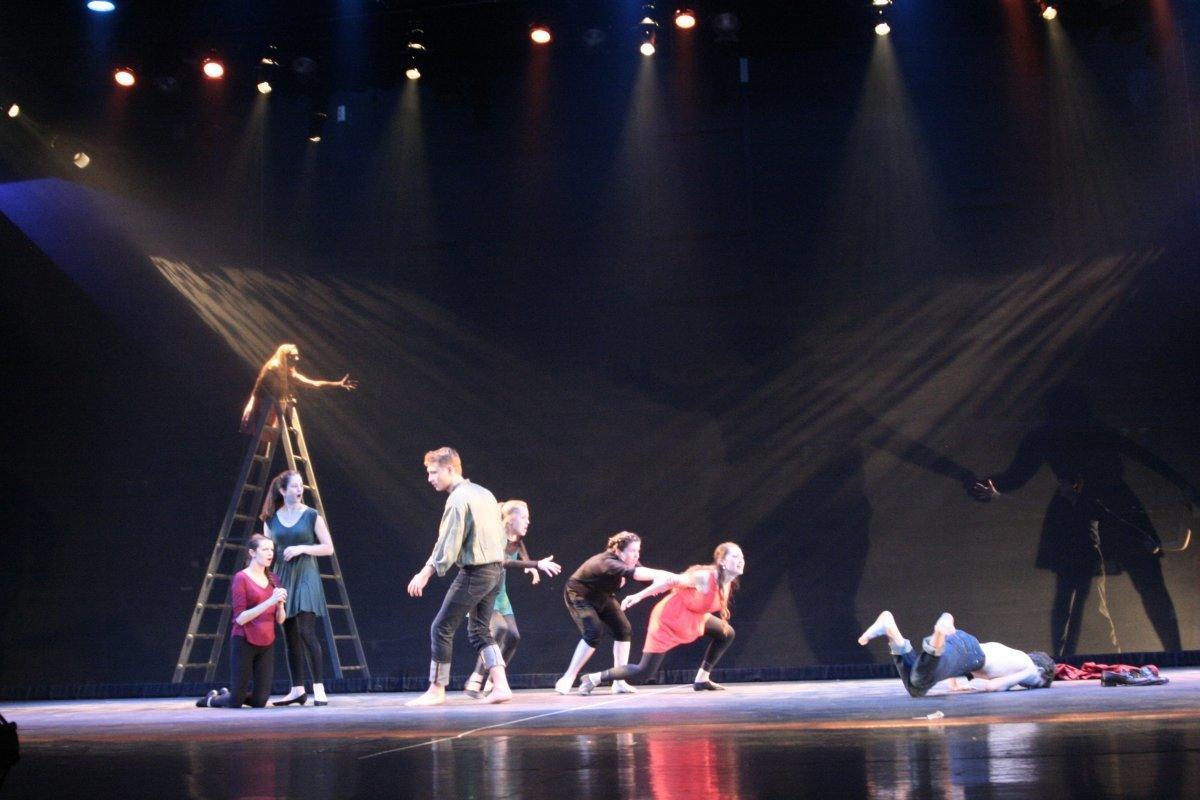 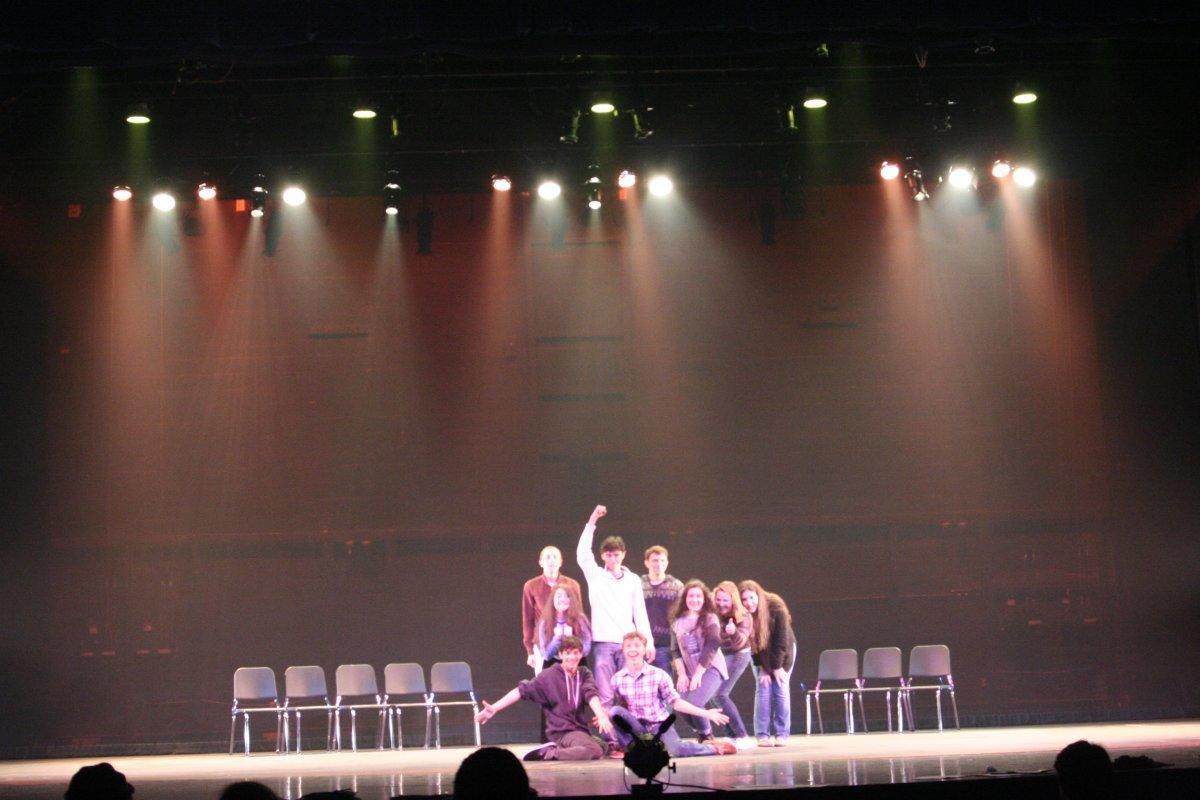 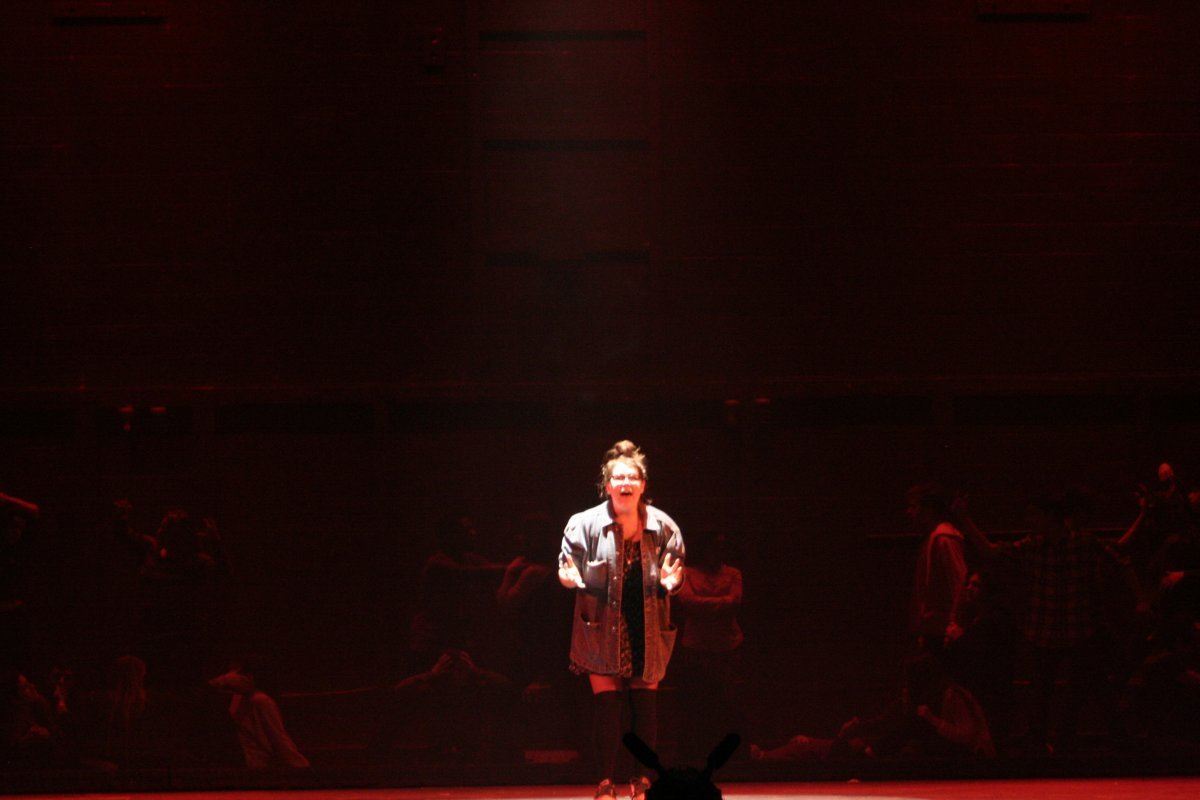 Colored Lights from "The Rink" 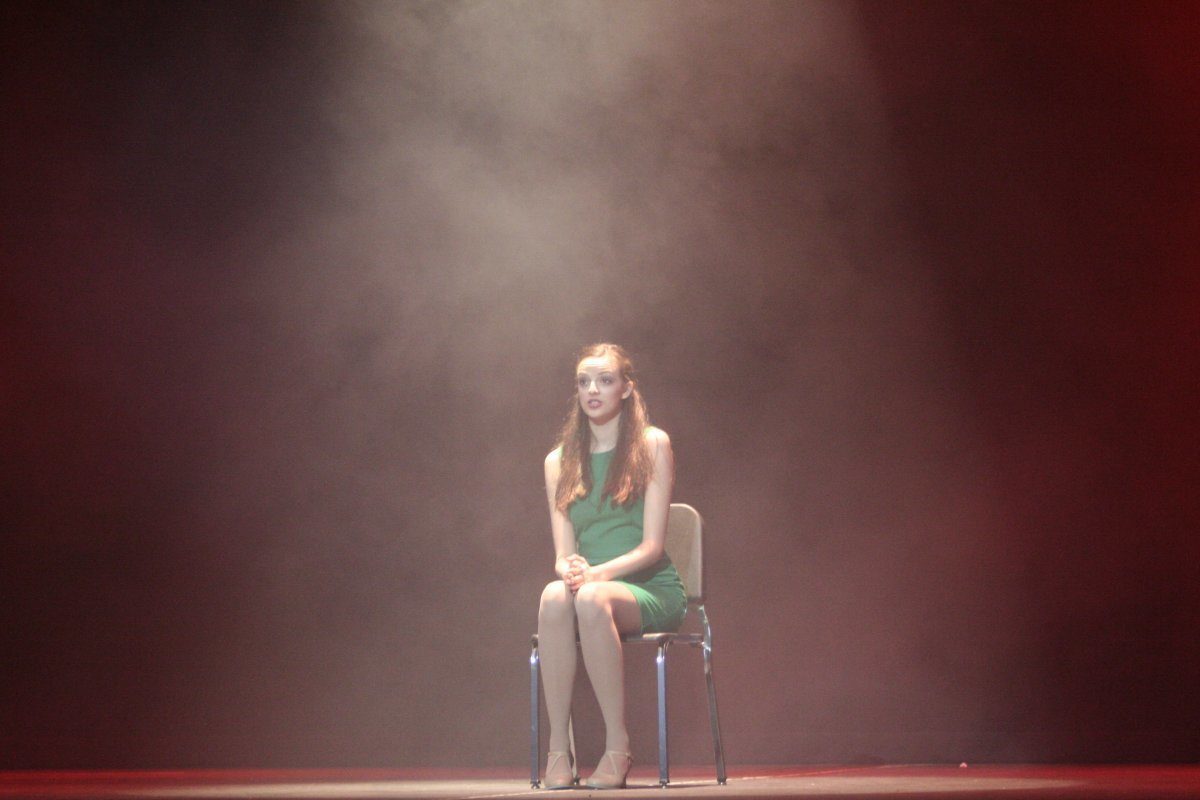 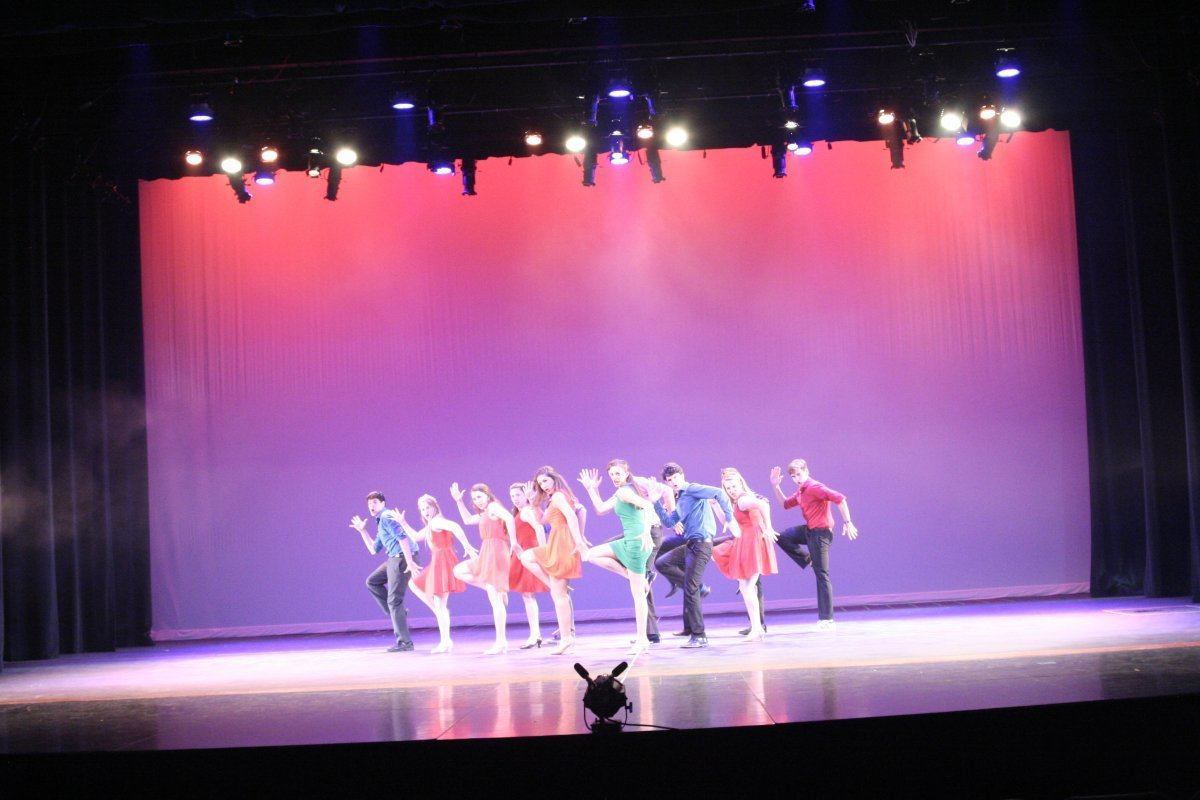 I didnt get a whole lot of tech time or time to work, but still not bad. 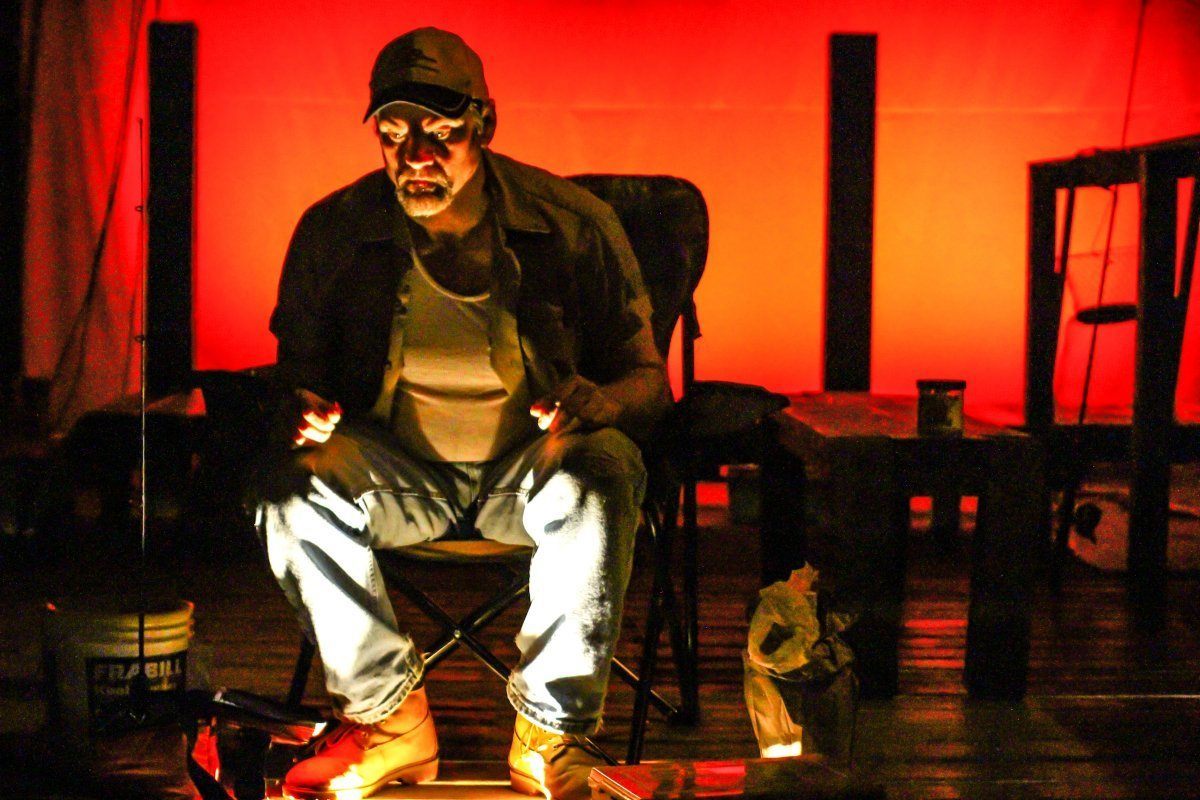 Accius08 said:
Cheers! I would have loved to use water, but the theatre was on the first floor of a building, so there would have been no practical way to empty the pool after shows. After quite a bit of trial and error, I think the end effect worked out well though!
Click to expand...

We thought we'd have the same problem, but equip the cast and crew with several trash bins and some buckets and you can empty a 2000-gallon pool in no time. Of course, actual water means you get to deal with the hassles of chemically treating the water and filtering it every night. Our water was crystal clear at the beginning each night, but makeup, hair, and costumes dunked in it, by intermission it was a cloudy mess. I really like your alternative approach to this effect.
Mike Nicolai, CTS-D
TLC Engineering Solutions
Venues & Acoustics Project Manager
ETCP Certified Entertainment Electrician

We have done a wide range of shows in our less than 15 month existence, from Streetcar to Whorehouse to Spamalot but I am really proud of this one. Death of a Salesman at The Central New York Playhouse, Syracuse NY. Set design and painting by Navroz Dabu, set construction by Steve Beebe, Lighting design by William Edward White, scenic install and lighting rigging by myself, Jim Uva and Justin Polly.

Last edited: Mar 11, 2014
"Lack of planning on your part does not constitute an emergency on my part"
L

Sadly don't have many pictures of it, but this was a very nice shot that was taken of the opening of a Student Worship night i was involved with at my church. While i was not directly involved with any lighting or operations of the night, i had some input on what would look good during the show. I have to say this is the one trick i love going back to. 20K Barco HD20 throwing white light through a cloud of haze at a person dancing always works well!

Boyd Edwards took these pictures. I'm amazed he managed to get any shots, as there was absolutely ZERO frontlight in them all.

We just did In The Heights. It's a fun show to build and light, especially the club scene. 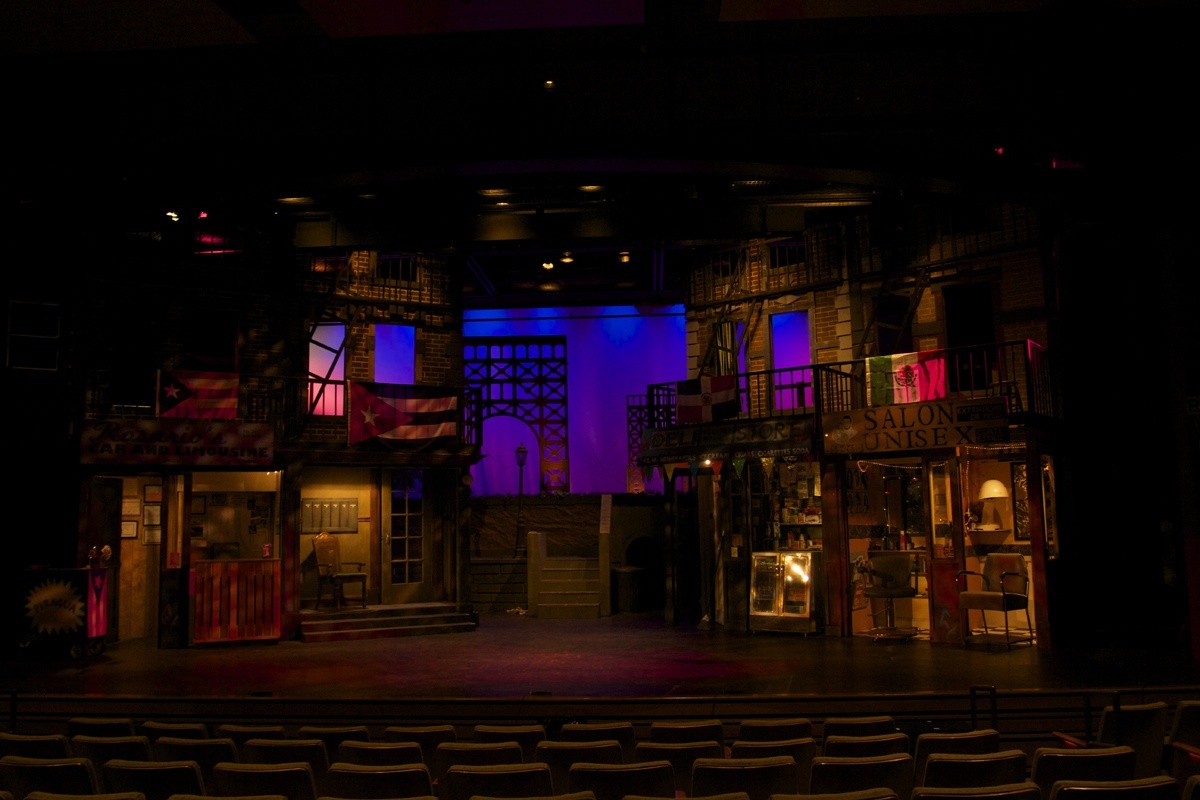 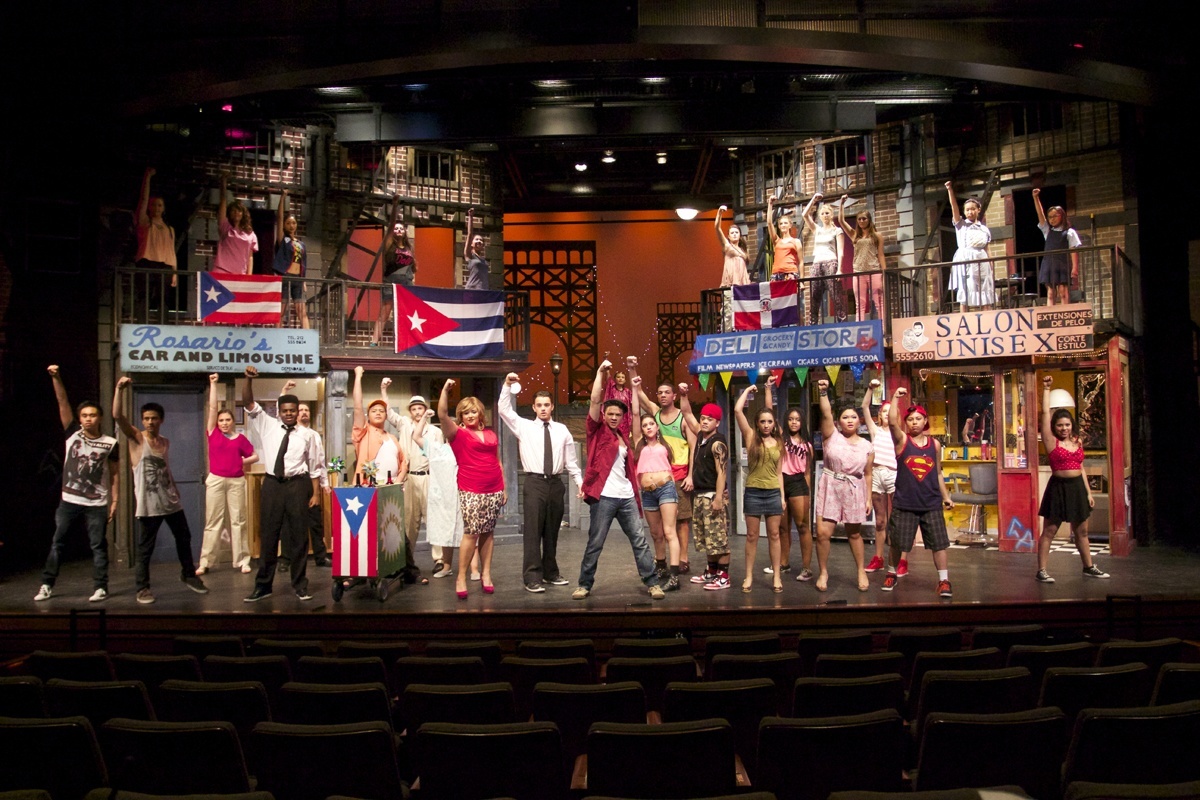 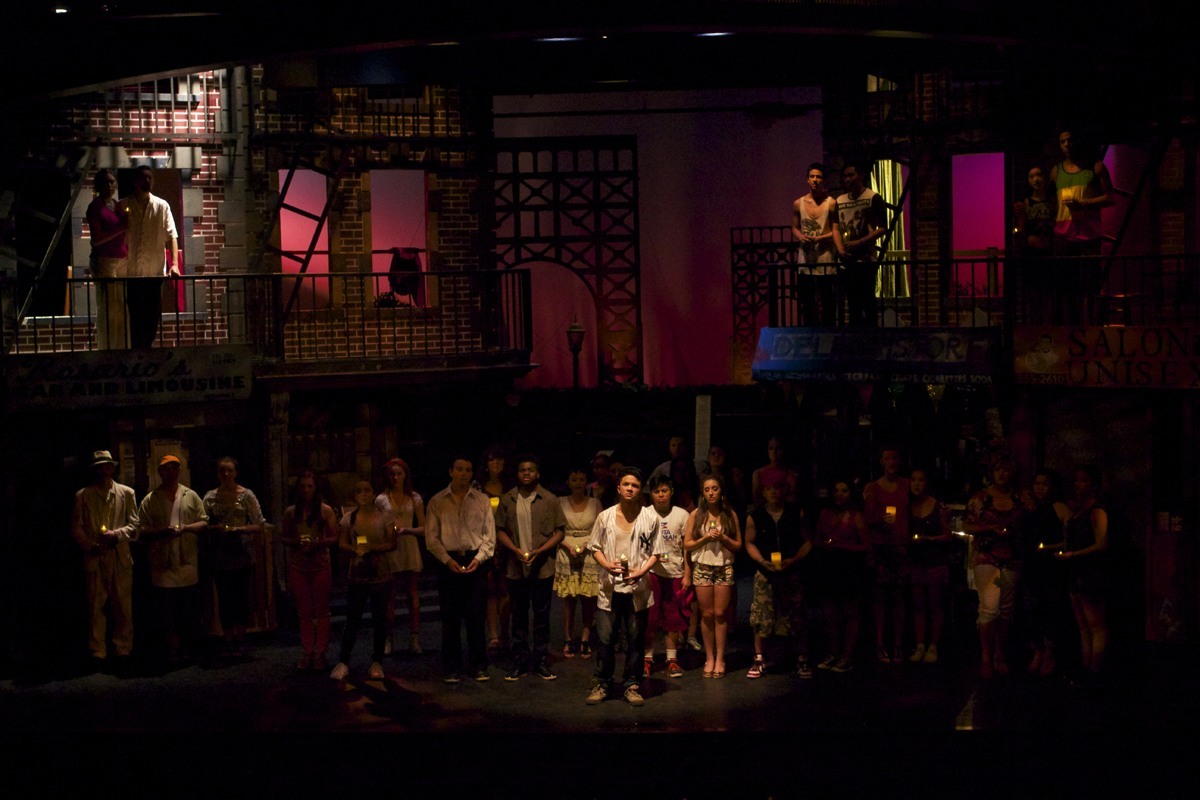 can you email me at [email protected] please.
Having to TD this musical next month we do pre-show. I have a few questions about your ideas on set including the railings for the 2nd floor and the bridge;
Thank you


Sent from my iPad using Tapatalk

So I lit this coffeehouse a few weeks ago
Dropbox - portfolioThis was one of the bands. they had a good photographer and let me use the images.
Cameron A. Macdonald

"I didn't realize that lineset was designed to self destruct!"

We just closed 1776 last week. The pictures with the actors are from our Wednesday "kiddie show," which we put on for the fifth through eighth grade students at the school.