New to the group, great inforamtion.
I'm trying to help a local high school with their theater lighting. Can anyone identify these lighting fixtures? They are anodized aluminum bodys with cast front and rear caps. I can't find any ID on any of the units. They use Medium Prefocus lamps in the 500-750 watt range.

I'm sorry but I've got no idea what those fixtures are, but I expect that someone will.
D

hi there,sorry but me to have no idea on that kind of lighting....do you have a picture so we can see it.

I've seen those before! The shorter ones are really old fresnels, and the longer ones are really old ellipsoidals, if I remember correctly. No brand ID though, I didn't get that good a look at them last time I saw them.
Steve // Squeek Lights
LD // Programmer // Console Trainer // Moving Light & Repair Tech // Tinkerer
Nothing is ever "state of the art"...something new comes out the next day.
"Don't ever grow up. It's over-rated."

Fight Leukemia
The fresnel looks as if it once had red paint on it. Red fixtures make me think of one thing...Mole-Richardson
http://www.mole.com/
Philip LaDue
Staging Supervisor at NYC Mobile Stage.com
Entertainment Freight Broker
M

The main body is actually a gold anodized aluminum. When you take the unit apart it's in 4 separate interlocking pieces on the side plus the front lens and rear panel.
Mike
High School Advisor
As long as the world is turning and spinning, we're gonna be dizzy and we're gonna make mistakes.
Mel Brooks

Senior Team
Premium Member
Based on how the gel frame/holder works, looks like something kleigel made. Also, the handles (the one on the ERS) looks very kliegel. Take a look at a few manuals/catalogs and see if you can find them. http://www.klieglbros.com/
Kyle Van Sandt
Production Coordinator
The Egg
Van Sandt Designs

I'm pretty sure that they're Kliegl Bros, I couldn't find anything that resembled them on the Strand Archive website, and I seem to remember that they were Kliegl when I saw them. The other brand that I think they might be is Century, before they merged w/Strand.
Steve // Squeek Lights
LD // Programmer // Console Trainer // Moving Light & Repair Tech // Tinkerer
Nothing is ever "state of the art"...something new comes out the next day.
"Don't ever grow up. It's over-rated."

CB Mods
Premium Member
My first thought at seing them was Kleigl, but ... are you sure its aluminum ? I thought Kleigl was out of the biz by the time cast aluminum was affordable and practical to the entertainment industry. I may be blowing smoke however.
Van J. McQueen
Technical Designer
Stagecraft Industries, Inc.
"The only Dumb Question is the one you don't ask."
All opinions expressed here by Van J. McQueen are his and his alone, and do not represent
the official opinions, positions or Values of Stagecraft Industries, Inc.
So there, Nyah!

Who made the parellipsphere? Those look like they could be its grandparents.
"We can rebuild him, we have the technology, but I don't want to spend a lot of money."
D

Electro-Controls made the Parellipsphere, but good luck finding much if any information on them.


I've been looking around the manuals at www.kleiglbros.com; I haven't seen anything really with ridges like those except for something like this one. http://www.klieglbros.com/catalogs/SpecSheets/3608/3608c78a.jpg
Last edited: Mar 14, 2007
Jeremy G.
Student Lighting Designer
Tufts University
M

Yeah, they're definitely aluminum, the ridges help cooling I suppose. Really unusual design, if you take the off the back and front, the sides just fall apart into 4 separate pieces. Checked out the kleig site and didn't find anything that was close enough. Didn’t consider Kleig because their unit are usually bigger and higher wattage units. These are all 6” fesnels or lekos. Originally thought they were old Strand or Century but still can’t match them with anything.
Mike
High School Advisor
As long as the world is turning and spinning, we're gonna be dizzy and we're gonna make mistakes.
Mel Brooks

CB Mods
I'm taking a shot in the dark, but I'm going to say that they're Capitol. The few Capitol lekos I've seen had that fluted lamp stem. I don't think they're Kliegl, most Kliegl's I've seen have a silver (Aluminum?) lamp cap.
One must first learn and understand the rules of theatre before one can break them.

You can't polish a turd, but you CAN roll it in glitter.
I turn rainforest into landfill the hard way.

gafftapegreenia said:
I don't think they're Kliegl, most Kliegl's I've seen have a silver (Aluminum?) lamp cap.
Click to expand...

If you look at the second picture there appears to be shiny metal where the cap was scratched at one point in time.
Philip LaDue
Staging Supervisor at NYC Mobile Stage.com
Entertainment Freight Broker

CB Mods
Still those ridges on the lense stem look so much like the Capitol and Centruy fixtures I've worked with. How do you remove the lamp caps? The Century lekos I worked with had this "spring latch" mechanism.
One must first learn and understand the rules of theatre before one can break them.

You can't polish a turd, but you CAN roll it in glitter.
I turn rainforest into landfill the hard way.

Senior Team
Premium Member
Sorry for the necropost, but as the original question was never answered, and the entire thread happened before my time on CB... 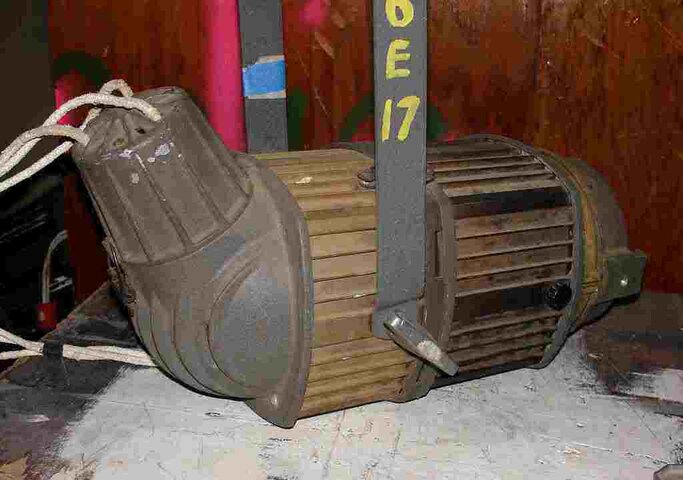 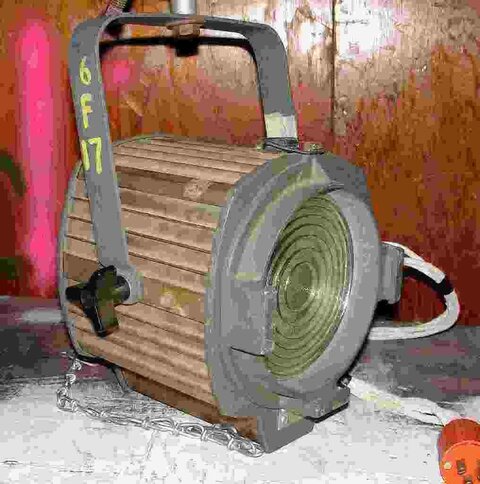 I'm 95% certain they're Major fixtures. The 5% doubt is that they could be LECO (Lighting Equipment COmpany). See the threads http://www.controlbooth.com/forums/lighting-electrics/16892-identify-lighting-instrument.html and http://www.controlbooth.com/forums/lighting-electrics/10595-who-heck-made-these-fixtures-quest.html . Major, LECO (first owned by Grand Stage Lighting, then sold to Major?) were, at times, all one and the same, and all based in Chicago.

The Major corporation was begun by Roscoe Major in the early 1900's.
The earliest address I found for them was 4603 West Fullerton Avenue
in Chicago, but they moved to newer and better facilities out in
Crystal Lake Illinois in the mid 60's. When I was involved in their
equipment, Father Major's sons Frank and Ross ran the operation.
Interestingly, the bread and butter of their business was
manufacturing reflectors for traffic signal lights, which was a
natural extension of their capability to spin and hydroform aluminum
reflectors and apply the highly reflective ALZAK coating found in
theatrical instruments.

The Major EXAL series of ellipsoidals and fresnels were so named because of
the body panels made of EXtruded ALuminum, sporting an anodized rather
than painted surface. At the time, the design was quite advanced and,
as Mr. Price experienced, they enjoy (or suffer) a long life span.
Click to expand...

The Fresnels look almost identical to 16 eight inch Fresnels that I have. They are Electro-Control circa 1976. The gel frame holder is just a bit longer and the zoom control is set back just a bit, but the finned aluminum sides and yoke are exactly the same.
As Derek has pointed out, they might be Major. The fact that Major purchased and ran Electro-Control for a short period, just before it was purchased by strand, might explain the very similar appearance.
M

Departed Member
The fresnels do have an EC look to them but I don't thinkthey are. The lekos are definitely not.
Michael S. Taylor

mstaylor said:
The fresnels do have an EC look to them but I don't thinkthey are. The lekos are definitely not.
Click to expand...