Senior Team
Fight Leukemia
The Lekolight was invented in 1933 by Joseph Levy and Edward Kook, founders of Century Lighting, and allegedly based upon a design by Stanley McCandless (see the patent at http://www.freepatentsonline.com/2076240.pdf). An Ellipsoidal Reflector Spotlight, it became the industry standard for decades. Just as facial tissue is called Kleenex and photocopiers are called Xerox machines, many people refer to all ERS instruments as "Lekos," regardless of manufacturer. Century Lighting has been purchased many times over the years and today is the product of Strand Lighting who owns the rights to the name Lekolight™, although Strand is currently no longer using the name "Leko" on any of its fixtures. But, that may change soon, as this marketing document suggests. 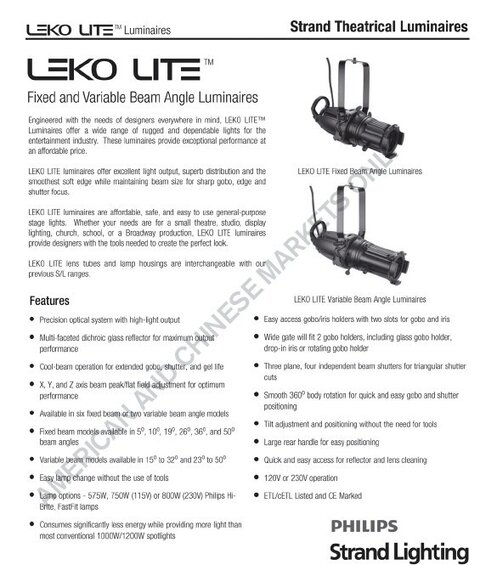 Looks a lot like the recently discontinued SL Coolbeam series, doesn't it?

There have been many, many discussions on ControlBooth about the Leko; here is a recent one: End of the Leko.
See also the Collaborative Article: Ellipsoidal Reflector Spotlight-Ancient History.

Externally, see Edward Kook obituary and http://livedesignonline.com/mag/show_business_oral_history_theatrical_2/.
Last edited by a moderator: Jul 28, 2009
Don't worry, I've screwed up bigger shows than this!
You must log in or register to reply here.