I've never worked in a space where fire sprinklers were so close to lighting positions and after I hung this cluster, it made me wonder if it was ok.
Sprinklers get discharged at something like 200 degrees F right? How hot does the air above a 575w source four get?

These 3 fixtures are about 8" below and about 1' away from a fire sprinkler. The sprinkler is about 8" away from the ceiling insulation.
Is this too close? How far away is far enough away? Am I paranoid?
Thanks 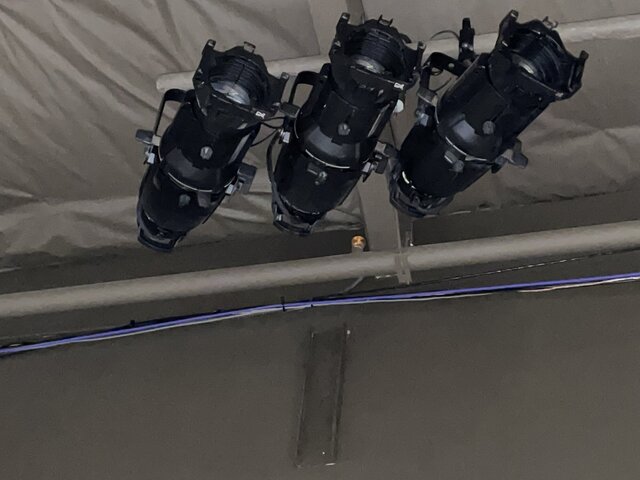 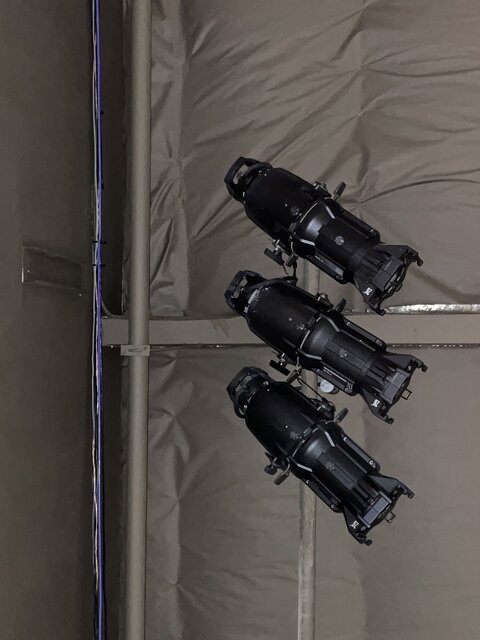 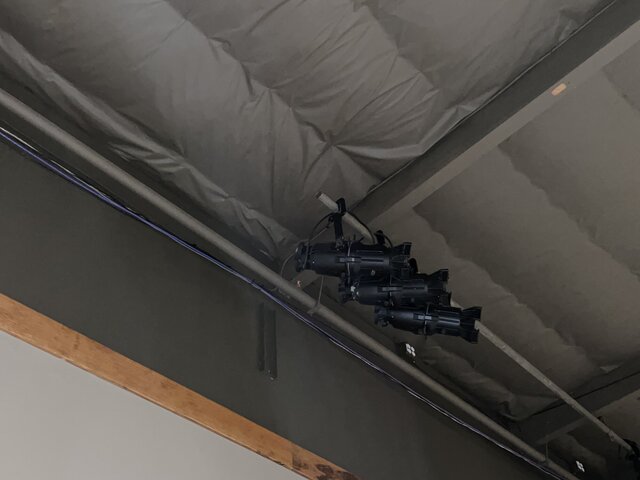 You are definitely right to be concerned, but this is one of those questions that only has fuzzy answers. Sprinklers come in different temperature ratings and response times, so you would need to identify what you have installed to know for sure what your limit is.

How hot that particular head is going to get depends on the ambient room temperature, air circulation, and how long those fixtures are on (& at what level). A point in your favor is that the position looks pretty open and appears as though there's room for convection to carry hot air up and away from the sprinkler head. This is much better than if it were at the highest part of the ceiling where you're heating up an area where the air is mostly stagnant. On the other hand, it's closest to the part of the fixture that will radiate the most heat, so it's definitely not an ideal location.

Your best bet is to identify the characteristics of that particular sprinkler head, and then do some careful testing by turning the fixtures on and closely monitoring the temperature change. Does it just keep going up? Does it level off at some point even with all three fixtures on at full? Try to get an idea of how your HVAC system affects airflow in that area as well and set it to whatever is a realistic and/or worst-case scenario for your test.

Oh, and keep in mind that there's probably some tolerance involved, so it might not be a good idea to let a 200F sprinkler head reach 190F...

Off the cuff.. that doesn't look all that scary to me, but it's a good excuse to get one of those little laser guided IR gun thermometers. (not all that expensive)
I'd fire up the cluster of 3 for 1/2 hour or so, then take some spot temp readings of the pipe and the sprinkler head itself.

A little sheet of foil dangling from wires or sheet metal with some sort of mount 6 inches behind the cluster might give you some peace of mind.
S

We have position that has 575w S4 Pars, they retroactivly decided needed heat detectors adjacent. The HVAC folks kindly shot one of those laser heat detector hand held units. The fixture was less than 120 deg. F., The detector was set to 150F. Never had an issue.
Last edited: Apr 7, 2021

Another consideration may be straight up distance. I was looking at the code a month or so back to figure out if I could hang a projector in the same ceiling tile as a sprinkler head. Turns out, at least here anyway, there's about a 2' bubble that has to be maintained around sprinkler heads for code compliance since you could disrupt the water flow.

You're mileage may vary, of course.

Here we have a general 18" rule around sprinkler heads. Something to keep in mind is it's not just about setting them off by accident but also that if they do go off because of a fire they need room to spread the water to greatest affect. If something is in the way, say some lights, then they catch the water and it doesn't cover the most effective area.

If the sprinkler has a red glass bulb (most common in commercial spaces) it's rated to pop at around 130F. Your green bulbs are rated 200F (you see them in freezers so they don't go off too early). There are others, clean up to 500F, but these two are the workhorses. Note that this is trigger temp, they need / are intended to have an ambient below that.

Note that in some buildings and climates the air temp near the roof gets pretty high. This will restrict convective cooling for both the fixtures and the sprinkler.

Also 120F will generally not burn skin, however S4 lamp housings have burned my hands many times.

Sounds like an 18-24" bubble is the way to go and I'll bring a tape measure as to not convince myself it's too close or not far enough away, just on intuition.

My thought in this particular situation that confused me about fire sprinklers is this building used to be for industrial printing and the warehouse didn't have AC and is in California. The ceiling has paper faced insulation that's right against the plywood of the roof. I imagine on a hot day, it may even get over 100F up there since it's essentially outside but with some insulation and plywood to keep the breeze from blowing and cinderblock walls radiating the sun inside.
Obviously in its current use-case, it's well conditioned.
M

RickR said:
Also 120F will generally not burn skin, however S4 lamp housings have burned my hands many times.
Click to expand...

This raises an important point about IR thermometers: the laser marks the center (ish... hopefully) of the field of view for the IR sensor. It's not like a laser range finder where the measurement is taken exactly where the laser hits and nowhere else. Instead, the reading is an average of everything in the field of view. For most IR thermometers, this means you can't get an accurate measurement of something small from far away.

Mine has a helpful little diagram on the back that says there is a ratio of 6:1 between the distance and the diameter of the field of view, so at 18' away it's measuring a 3' diameter circle. That's actually a little tighter than I might have guessed (I admit I never actually paid attention to that diagram until now), but still way too wide to measure a light fixture from the floor.
You must log in or register to reply here.