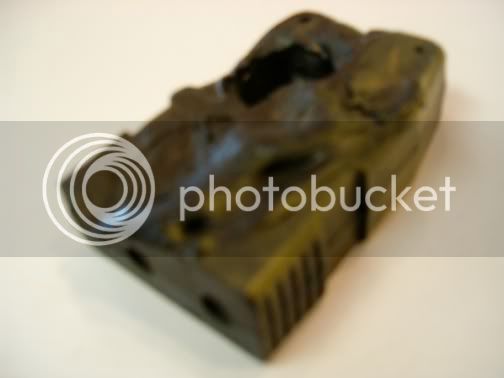 I found the one on the Right while hanging a Source4 HPL575 PAR SixBar, and called it to one of the road guy's attention. He said, "Just tape over it." I said "NO FRIGGIN WAY!" and replaced it with one from House Stock identical to the one on the Left. There wasn't any electrical issue, no scorched pins or anything like that. Oh, and I had to spread the pins on every male I connected! This is the same road company that didn't own any black e-tape or tieline, but wanted their cables dressed neatly, had most of the clamps for their moving lights in just a few boxes, instead of two pair in each dual box, and acted offended when I demanded a safety cable on every fixture. Also, they had "sort-of" single row PRT. The 20.5" truss had no internal diagonals, so the lamp bars rode with the lights inside, and when deployed the lamp bar rested on the wheel plates, with no mechanical attachment! Not a real safety issue, as it's very difficult to get the bar out of the truss, but the bars moved upstage/downstage and rocked when trying to focus!

I'm amazed, (but shouldn't be), that the Producer tolerates this kind of sub-standard equipment and practices. People wouldn't believe it if I told you what the event and gross sales were. But the good news is since they were paying the lighting company so little for their incompetence and bad equipment, the local crew made lots of overtime. Go figure. /rant off.
Last edited: Jul 2, 2010
M

Good for you. Safety is the one area in which there are no compromises. Either the road show meets ALL house safety guidelines, or the show does not go on. Period.

Here's another good one but I've started a new Question Thread about it.

I see melted stage pin plugs all the time, two sets of them just last week. Often melted as a male/female set together. Lamp bars especially seem to have this problem when not properly done but it could be any plug melting down when touching a light. Hmm, tie line/tape much less spare plugs... Hope the house markup on gear sold or provided to the visiting company is decent enough in markup also.

Than there is 60A stage pin plugs that need re-torquing every year or they can easily melt down without even touching the heat of a light fixture. 30A plugs and even 15/20 Amp plugs also normally seem to have problems after the first full load use by way of terminal tension after the wire has settled and expanded/contracted some. Other option is to over-tighten and expect it will be right after that first use and the conductors settle, neither re-tensioning after first use or over-tightening is a good option. Nor this loosening something you see with set screw/ferrule type connections.
You must log in or register to reply here.
Share:
Facebook Twitter Reddit Email Link