Thats cool.
Would you mind sharing pictures of your theatre whenever you chance?

What do you want to see? You can see a couple of the towers up in the air upstage here. We've got 10 sticks of truss and 9 towers in the air, spaced between the last 15 linsets upstage. 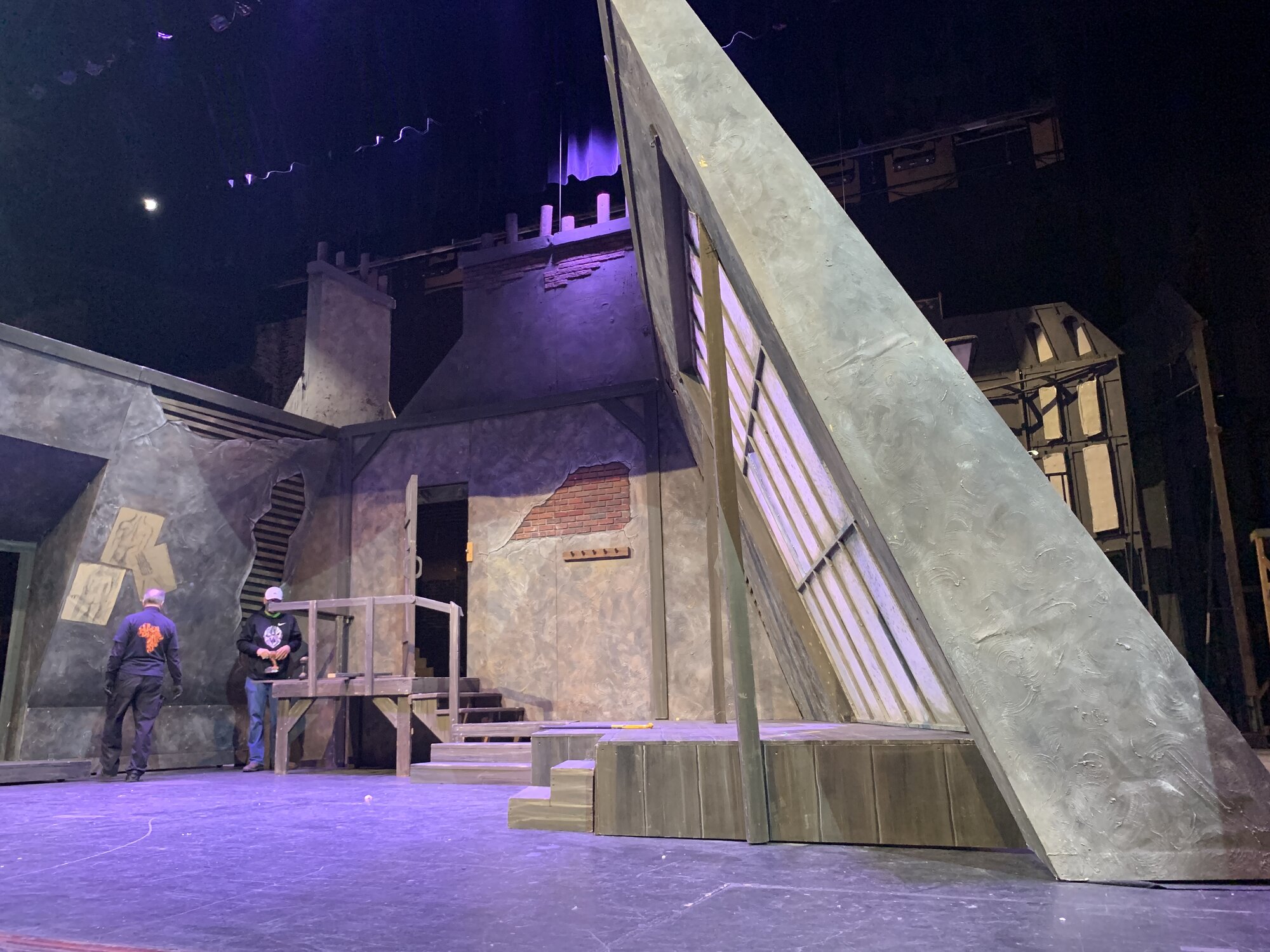 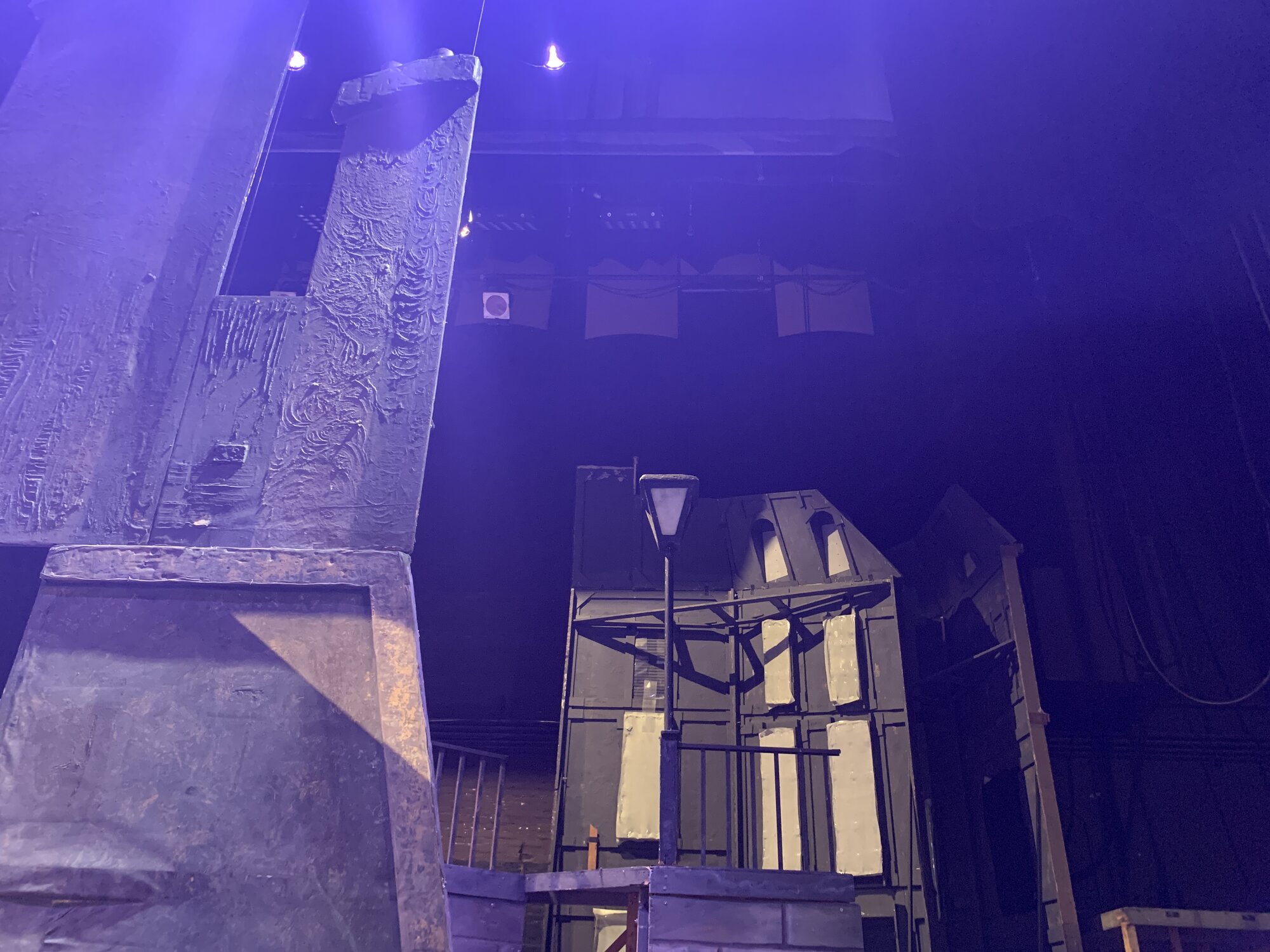 josh88 said:
Yeah I'm in a theatre. Stacking motors save having to get a forklift in tight spaces and small venues or on stages that can't take the weight. We store stuff in the air all the the time. We store the towers of our shell in the air on truss above the stage. For Wicked, it depends on the piece, they have permanent points installed on some of their pieces, and some they just leave hangers or bridles attached to.
Click to expand...

@Dagger and @josh88 When I toured with the rock musical "Buddy, The Buddy Holly Story" in 1990, we had 7 motorcycles in the production. Approximately 90 minutes to two hours prior to the first performance of any given day, Carp's would fly them in then props would take them out, run them , warm them up, race them a little to minimize the accumulation of carbon within their cylinders, replenish their tiny fuel tanks, (There were normal tanks for the look but tiny tanks actually containing only enough fuel for a performance.) then they'd come back in and be flown one below the other with three stacked USR and four stacked USL.
To keep noise down back stage, the motorcycles were hung from a pair of 4 to 3 blocks.
In reality the bikes were tiny Honda's, approximately 90 cc's; they were beefed up with fiberglass to appear much larger. The sounds of their puny engines were buried in pre recorded sound effects of MUCH larger, beefier motorcycles. The stage went black for a scene change, the band played, the SFX rolled, and the seven bikes "roared" on stage with their lights lit and the actors stopping on, or close to, their marks seeing only by their bikes headlights; looked and sounded great performance after performance. The seven bikes and one spare were modified for the production by Singular Productions of Niagara-On-The-Lake, Ontario. In Toronto, the bikes were warmed up in a back alley behind the Royal Alexandra, on Broadway they were warmed up and polished in front of the Shubert Theatre where they caught the eyes and ears of passersby and hopefully helped sell tickets.
It always seemed strange to walk backstage and see four motorcycles hanging in a chain with the lowest bike's wheels perhaps 30' above the deck.
Toodleoo!
Ron Hebbard
D

egilson1 said:
The main difference is that the control voltage on a hoist is usually 120v which an xlr connector is not rated for.
Click to expand...

Most XLR connectors actually are rated for 120VAC operation by their manufacturers, at surprisingly high currents. Here's the specification sheet for Switchcraft A series male connectors for one example. 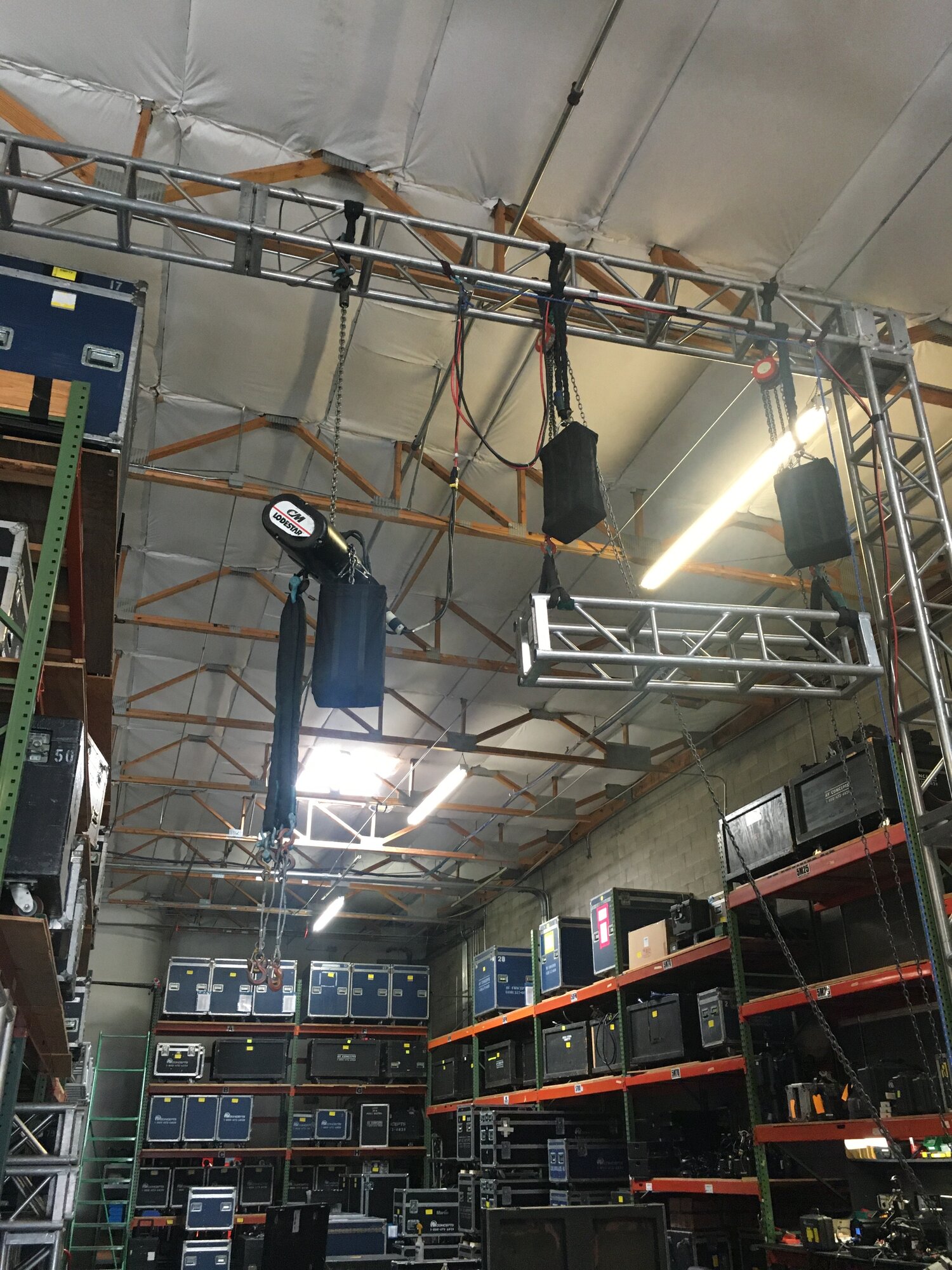 I think ours is the exact same motor, but just with the spansets, we've found they're long enough to hook under the corners of the cases alright. Of course we have to pretty constantly hang and strike it from our 70' grid because we never have enough room. #1895eravenueproblems.

Same as ours, We've got a company switch normally dedicated for audio right there and we run it off one of the edison plugs on the lunchbox that powers my line arrays, ends up working out pretty well.

josh88 said:
A motor for stacking and unstacking road cases. Usually just runs around head height with 2 spansets on it to hook under the top case near the wheels to pick and lower to the ground.

And in the case of Wicked, they've made permanent points on a lot of their scenery and cases and hampers so that they can fly a table or something they don't need and when its off the ground, connect the next piece under it, continue lifting and keep connecting more pieces until they've got everything they want stored up in the air for those times that they are in theaters that don't have enough wing space or storage elsewhere.
Click to expand...

I have a friend that works on the Broadway production of Wicked an gave us a full tour a couple years ago. That is exactly how they store set pieces and props when not in use. See the attached pics.

Most touring shows operate this way.
Mamma Mia has the bed used at the top of Act II flown out of the way as well as tanks of liquid nitrogen and hampers.
R

macsound said:
Most touring shows operate this way.
Mamma Mia has the bed used at the top of Act II flown out of the way as well as tanks of liquid nitrogen and hampers.
Click to expand...

@macsound Bed and hampers, great; those tanks of liquid nitro' flown overhead give me a few palpitations.

( @dvsDave How can I add a "Like" and a "Wow" simultaneously? [ Some geezers are NEVER satisfied.] )
Toodleoo!
Ron Hebbard

RonHebbard said:
( @dvsDave How can I add a "Like" and a "Wow" simultaneously? [ Some geezers are NEVER satisfied.] )
Toodleoo!
Ron Hebbard
Click to expand...

Dan Fischer said:
I have a friend that works on the Broadway production of Wicked an gave us a full tour a couple years ago. That is exactly how they store set pieces and props when not in use. See the attached pics.
Click to expand...

They're mostly prepped to do that for small theatres. They don't do it if they have the space to avoid it, because its saves a hassle and added step, keeping something out of the air, but its also a quick solution when you've got nowhere to go but up. The tour actually had to cut a hole in the exterior wall of a theatre to get some of their equipment in. But that was for a pretty long sit down.

Dagger said:
I am trying to make my own motorpicke. I knoe the wiring , have the panel cable xlr, micro switch etc.

I can not find appropriste housing for it. Any suggestions.

I have attached an image for reference.
Click to expand...

What is a pickle ?

Flown storage? Yep. Our PAC is round, with 4 theaters/stages - and they all back up together which means the stages are trapezoidal, not rectangular. When "the Mouse" came through with Beauty and the Beast, they had a number of building modifications made (like 4" coring of the fly floor in 5 places) to allow certain large, used-once things have a home... Maurice's contraption/invention was hanging right over the venue's SM console.

Wicked also flew (ironically) the levitation machine that 'defies gravity' at the end of act one, among other things.

The Lion King flew LOTS of stuff - the pampas grass headpieces, props hampers... and spilled out onto the stages of 2 other theaters in the complex, as well as the paint shop.

Chris Cotter said:
What is a pickle ?
Click to expand...

Chris Cotter said:
What is a pickle ?
Click to expand...

But also, check the underline on your post under pickle and it will take you to our Wiki entry for it!

I decided to build my own XLR pocket pickle as several of the local vendors have XLR pickle based hoists. Below is the list of parts I used. Also attached are some pictures.

So the total cost was just under $43 bucks if you base price on unit cost of the parts. I also purchased a 5' XLR cable for $13.
Time was about 90 minutes start to finish.

Some learning curve notes:
- Don't center the switch along the long axis of the housing. I had to slightly shift the switch away from the XLR connector after i cut the hole for the switch. Thankfully the switch bezel had just enough size that i didn't have expose the cut out for the switch after I adjusted it.
- I epoxied the switch into the housing. don't get the epoxy into the switch itself.
- I checked the pin out with the hoist vendors before I soldered the switch to the XLR. There is no standard, so you need to know how the hoists you plan to use the pickle with are wired.

Image 1 is of the housing before I cut out the switch opening. I used my dremel to get the rough size and then hand filed the exact fit.
Image 2 is of the XLR panel mount with the wires soldered to it.
Image 3 is the 3 position (on - off - on) rocker switch epoxied into the housing.
Image 4 is the XLR installed. you can see how tight it was.
Image 5 is the final assembly. 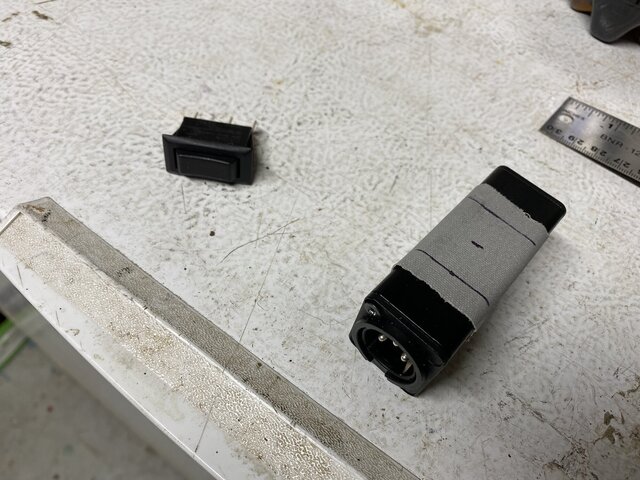 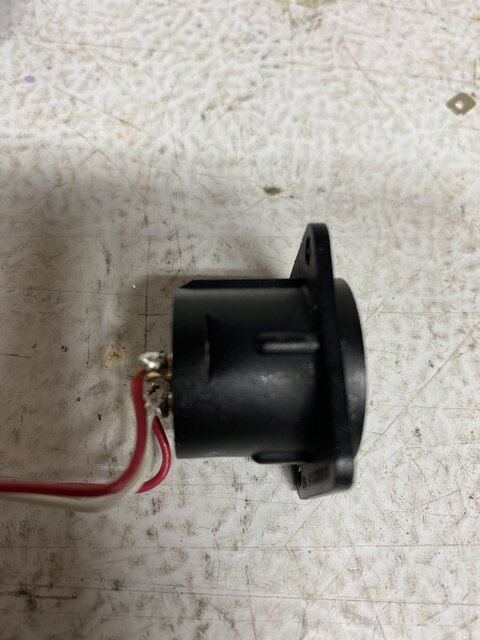 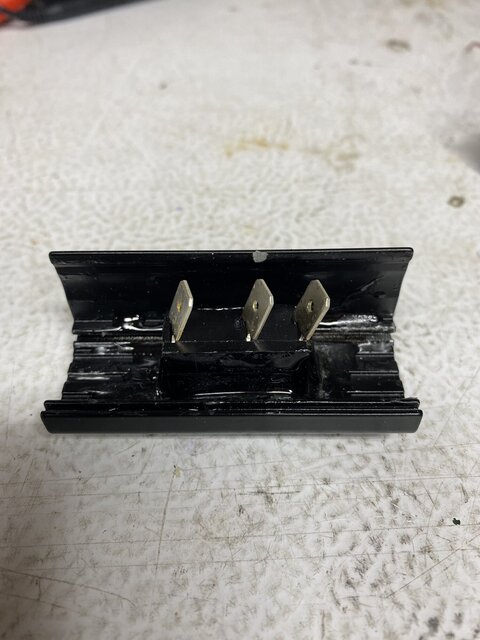 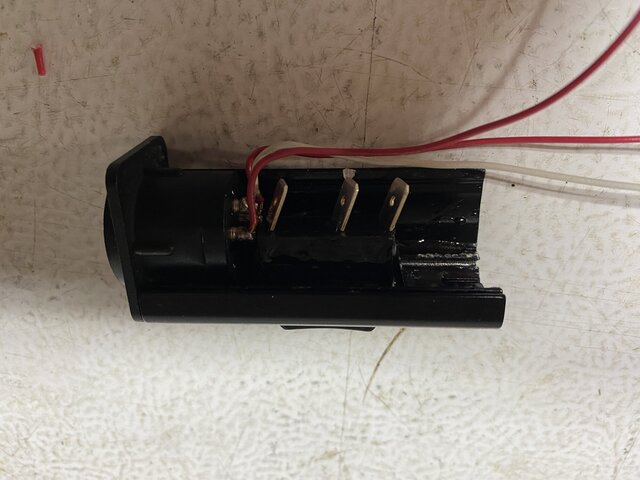 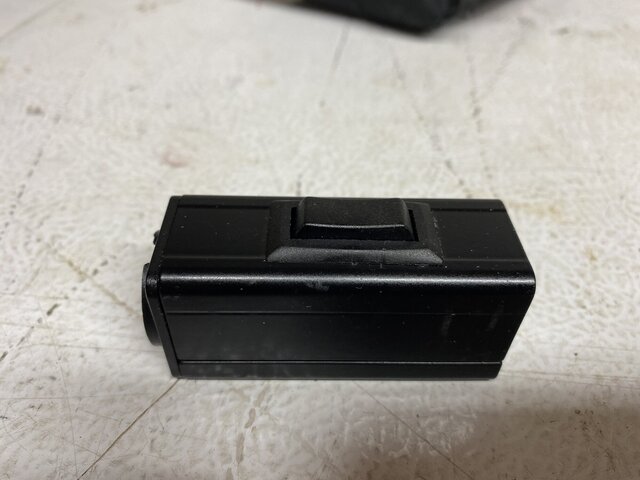