New Here, But not to Tech

Howdy! I'm a high school student, and have been doing tech for my school for three years now. Glad I found this place!!!

Ignore the random qauestion interrogation that will begin shortly.

Meanwhile, what kinda equipment does your school have? Do you have a personal portfolio website for us to check out? Any other fun tech stuff?

Ask and answer away, but use the search feature to check if a topic has been covered before.
Steve // Squeek Lights
LD // Programmer // Console Trainer // Moving Light & Repair Tech // Tinkerer
Nothing is ever "state of the art"...something new comes out the next day.
"Don't ever grow up. It's over-rated."

CB Mods
Premium Member
Welcome Aboard! Glad you found us too! great place here, with all sorts of backgrounds and disciplines to draw on, never be afraid to ask a question.
Just remember, you like Pirates, Cubits, you'd love to have a wombat as a pet and Voltage should only come in the 120v 60hz variety, and you'll get along just fine.

Van said:
Just remember, you like Pirates, Cubits, you'd love to have a wombat as a pet and Voltage should only come in the 120v 60hz variety, and you'll get along just fine.

Holy crap! Are we answering the questions for them now, Van? What is this insanity?

Ignore the man. He's really gone off his rocker this time!
Steve // Squeek Lights
LD // Programmer // Console Trainer // Moving Light & Repair Tech // Tinkerer
Nothing is ever "state of the art"...something new comes out the next day.
"Don't ever grow up. It's over-rated."

Hi there from Australia. I can't send you a wombat but I can send you a welcome from down under.

Join us and feel free to ask any question no matter how stupid you think it is. It probably isn't, but it pays to use the search engine first.
Tony Moore
Retired.
If it ain't broke don't fix it.

Senior Team
Fight Leukemia
Welcome to the Booth ZJH! Besides dazzling you with our knowledge, we have a good time around here too.


soundlight said:
Holy crap! Are we answering the questions for them now, Van? What is this insanity? Ignore the man. He's really gone off his rocker this time!
Click to expand...

I believe he said his rocker broke during "House and Garden" and now he just has his soap box.
Don't worry, I've screwed up bigger shows than this!

hello from another down under member, hope you find the site as educational as we do. unlike logos i can offer you a wombat

ok, as you ordered

*animal rights rant*
you two are twisted for thinking about cooking wombats. wombats are such cute little creatures and should never be thought of as food.
*end animal rights rant*
ok now you can tell i'm totally an animal rights activist. now i'm going to go sit quietly and hope war doesn't break out.
~Meghan~

nah it's all just a joke, gaff doesn't want to eat those cute little critters, it's only a joke. like our metric-imperial war, that ended in cubits
Alex Hughes
Lighting Programmer
ConsoleTraining.com

Senior Team
Fight Leukemia
Hughesie. I'm trying to find the thread with the link to the wombat rescue people but can't. Meghan needs to see the picture of from that site of what these "cute little guys" can do.
Don't worry, I've screwed up bigger shows than this!

Fight Leukemia
I like animals, although this one won't get off of my sofa. 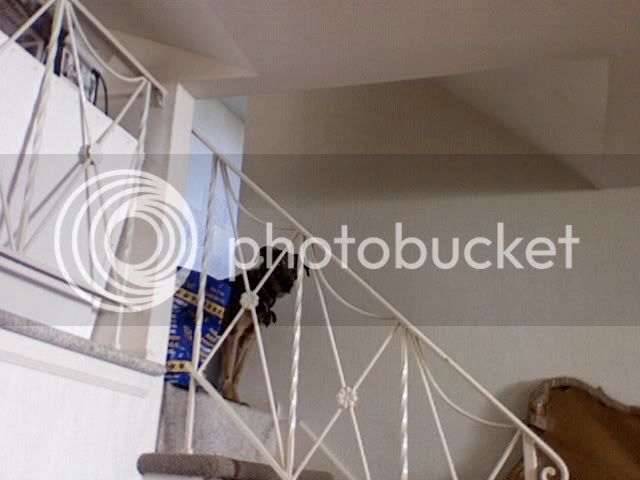 phil, i can explain that, he's hiding from the aliens that are coming

ohh such a cute doggy. what kind of dog is it?
~Meghan~

meghan said:
ohh such a cute doggy. what kind of dog is it?
Click to expand...

If anyone actually knows I'll give them a dollar.

gafftaper said:
... the link to the wombat rescue people ...
Click to expand...

I wasn't Hughesie that posted it it was me.

Senior Team
Fight Leukemia
Thanks Logos... A quote from "Night of the Wombat"... the story of what happens when you are nice to wombats...

"...It was then that I felt a gentle nudge from behind. I instantly knew who it must be, and was not a bit surprised to turn and find Rocky. I stood up and slowly backed away from the wombat. Donna had warned me the week before to never turn your back and to never run if threatened by a womby, but to back up carefully and offer him your boots to bite. Rocky did not bite, however. He went between my feet a few times, back and forth with no particular menace. It was almost as if he was toying with his prey. I continued to back up, holding out the flimsy yellow pail out as if that might deter him. It all seemed very surreal, like a David Lynch movie. I wasn’t really afraid, but was just trying to figure out how to get out of such a jam.
We had not gotten very far in our peculiar dance before Rocky became aggressive. He started to bite. Hard. My pail went flying and I remembered another tip Donna had given me for handling an enraged wombat: grab him under his front arms, pick him up, and hold him until you can safely drop him. Unfortunately, this tactic was designed for an area that you can get out of or into, like an enclosure or a house. We were in the middle of the bush, hundreds of feet from the house. I did manage to pick him up, and sit down, huffing and puffing, with my struggling mass of very angry flesh and fur. My next thought was, of course, “What do I do with him now?”
As I sat in the dark with a wombat that wanted to destroy me, I saw that there was a tree a short distance away. I knew I couldn’t hold onto him for very long, and I decided to chuck Rocky aside and make a run for the tree. I flung him aside and made a desperate dash for the tree. As I leapt upward into the fork, Rocky sunk his powerful teeth into the back of my upper right leg. (Note to self: next time: grab wombat, get to tree, fling wombat. Not grab wombat, fling wombat, run to tree). I somehow managed to shake him off and clamor up a precarious perch, only a few feet off the ground. I didn’t know if wombats could climb or not. If so, I was history..."

For the sick ones out there, you can see the disgusting close up pictures here and here.

Thus the reason all rescued wombats should be fattened and made into pie, never release them, they will try to kill you.
Last edited: Nov 30, 2007
Don't worry, I've screwed up bigger shows than this!

Yeah OK but they do like carrots.
Tony Moore
Retired.
If it ain't broke don't fix it.
T