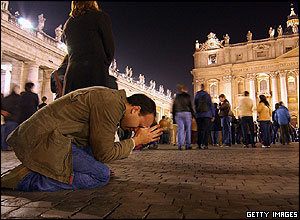 John Paul II, whose 26-year reign as the charismatic leader of the world's 1 billion Roman Catholics was highlighted by visits to 129 countries, died Saturday. He was 84.

"The Holy Father is deceased this evening at 9:37 in his private apartment," Archbishop Leonardo Sandri said in a written statement.

"Our beloved Holy Father John Paul II has returned to his home. Let us pray for him."

Vatican spokesman Joaquin Navarro-Valls also referred to changes in the papal transition process that were made nine years ago.

"All the procedures that were foreseen in the apostolic constitution [universi dominici gregis] that were put forth by John Paul II on the 22 February 1996 have been launched." (Rituals ahead)

Sandri asked the throng of thousands of faithful who had congregated in St. Peter's Square for a few moments of silence as he announced the death. People in the crowd bowed their heads to pray, some of them in tears.

They then burst into applause.

"Let perpetual light shine on him and let him repose in peace," he said.

The pope was known for his energy, intellectualism and activism on the global stage. His health had been deteriorating severely for several weeks, and he had battled Parkinson's disease and crippling arthritis for years.

John Paul had been slipping in and out of consciousness Saturday after his heart and kidneys started to fail after a urinary tract infection.

Navarro-Valls said that despite his precarious health, the pope had decided to remain in his residence at the Vatican, rather than returning to Gemelli hospital in Rome, where he had been hospitalized twice since February.

He was administered the sacrament of anointing the sick, formerly known as last rites or extreme unction, Thursday night.

Pilgrims, tourists and Italians filled St. Peter's Square on Saturday, hours after tens of thousands of people packed the vast space in a nighttime vigil.

Thousands of people gathered in Krakow, Poland -- where John Paul served as archbishop before becoming pope -- at the archbishop's residence. People in the crowd prayed for their fellow Pole.

In the United States, President Bush said his country loved the pontiff.

"All popes belong to the world but Americans had special reason to love the man from Krakow," Bush said at the White House. "Pope John Paul II was himself an inspiration to millions of Americans and to so many more throughout the world.

"We will always remember the humble, wise and fearless priest who became one of history's great moral leaders."

U.N. Secretary-General Kofi Annan said he was privileged to have met the pope.

"Quite apart from his role as a spiritual guide to more than a billion men, women and children, he was a tireless advocate of peace, a true pioneer in interfaith dialogue and a strong force for critical self-evaluation by the Church itself," Annan said.

Rising from humble beginnings in pre-World War II Poland, John Paul was the most widely traveled pope in history and was the first to visit the White House, a synagogue and communist Cuba.

Only two of his 263 predecessors served longer than he did -- St. Peter, the first pope, and Pius IX in the 19th century.

Supporters and critics alike agree on the immense significance of his papacy.

He played a key role in the fall of communism and brought the Catholic message in person to an unprecedented number of people.

He drew enormous crowds in his public appearances and was known for his courage and integrity.

A profoundly conservative leader, he reaffirmed many of the church's stances on issues such as abortion, homosexuality and the role of women in the church.

Despite criticism, he remained unwavering on those and other stances, including his preference for centralized authority within the church, which some saw as hindering a move toward a more democratic church.

The pope suffered from severe hip and knee ailments and Parkinson's disease, a progressive neurological disorder that can make breathing and swallowing difficult.

On February 24, doctors performed a tracheotomy to help him breathe, as he struggled to recover from a bout of flu that hospitalized him.

Unable to speak, he used hand gestures to bless thousands of people who gathered for a glimpse of him.

On Easter, the pope also tried to speak to the crowds but could not get out the words. Ill health forced him to miss several events during Holy Week preceding Easter.

On Wednesday, a feeding tube was put down his nose into his stomach to provide additional nutrition.

The feeding tube was inserted shortly after the pope's regular weekly audience, where he appeared at the window of his study overlooking St. Peter's Square for about four minutes.

Lights remain burning in the windows of the papal apartments after word of the pope's death.

After his ordination as a priest in November 1946, he rose steadily through the church hierarchy, becoming archbishop of Krakow in 1964.

He was elevated to cardinal in a secret consistory in 1968 and formally installed in a Vatican ceremony days later.

Despite his reputation as a formidable theologian and fearless defender of Catholic interests, his election as pope October 16, 1978 -- the first-ever Slavic pope and the first non-Italian to occupy the post in 455 years -- came as a surprise.

So too did the energy and determination he brought to his papacy, never letting health issues get in the way of his travels.

Not even an attempted assassination in 1981 kept him down. A Turk named Mehmet Ali Agca shot him twice. The pope recovered and later met Agca in prison and personally forgave him.

He re-established the Vatican's diplomatic relations with Great Britain and the United States, as well as with Israel and the Palestine Liberation Organization.

He delivered more than 2,000 public addresses and issued countless encyclicals and apostolic letters, making him one of the most active men ever to occupy the papal see. He canonized 482 saints, more than any other pontiff, and created 232 cardinals.

His papacy was divided into two distinct halves.

"In the first 10 years his great concern was with communism," said Warsaw-based Catholic commentator Jonathon Luxmore. "Since then his focus has been more on the ills of Western society."

John Paul's role in the fall of communism was a subtle but crucial one. His visit to Poland in 1979 and his support for the Solidarity movement were key in the chain of events that led to the eventual crumbling of Gen. Wojciech Jaruzelski's regime 10 years later.

His stand against what he saw as the moral failure of Western capitalism, however, was notably less successful.

Although his outspoken views on human rights gained him many admirers, his preaching in such areas as sexual mores, science and the role of women in the church alienated many liberal Catholics.

"He was what you might call a revolutionary conservative," said Giovanni Ferro, editor of the Rome-based Catholic magazine Jesus.

"In some areas he was very forward-minded. In others, however, he was an extremely traditionalist pope. He maintained all sorts of opposing currents in the church, with the result that his successor will probably be faced with a great crisis of direction."

Who that successor will be remains to be decided by the College of Cardinals, which will meet at the Vatican in the coming days to select the next pope.

Whoever it is will struggle to make his mark, succeeding as he does one of the longest-serving and most contentious figures in papal history.

"One thing is for certain," Luxmore said. "[John Paul II] is going to be a terrifically hard act to follow."

Fight Leukemia
He was a great man who broke down many of the boundaries that had seperated the world. He will be missed not only because of his office, but also because of his great compassion and love for all man.
Philip LaDue
Staging Supervisor at NYC Mobile Stage.com
Entertainment Freight Broker
D

I agree with everything said above that he was agreat man and leader for the Catholic Church. He toucjed millions in many countries around the world. God bless him.
Last night I played a tape at full blast. The mime next door went nuts.
You must log in or register to reply here.