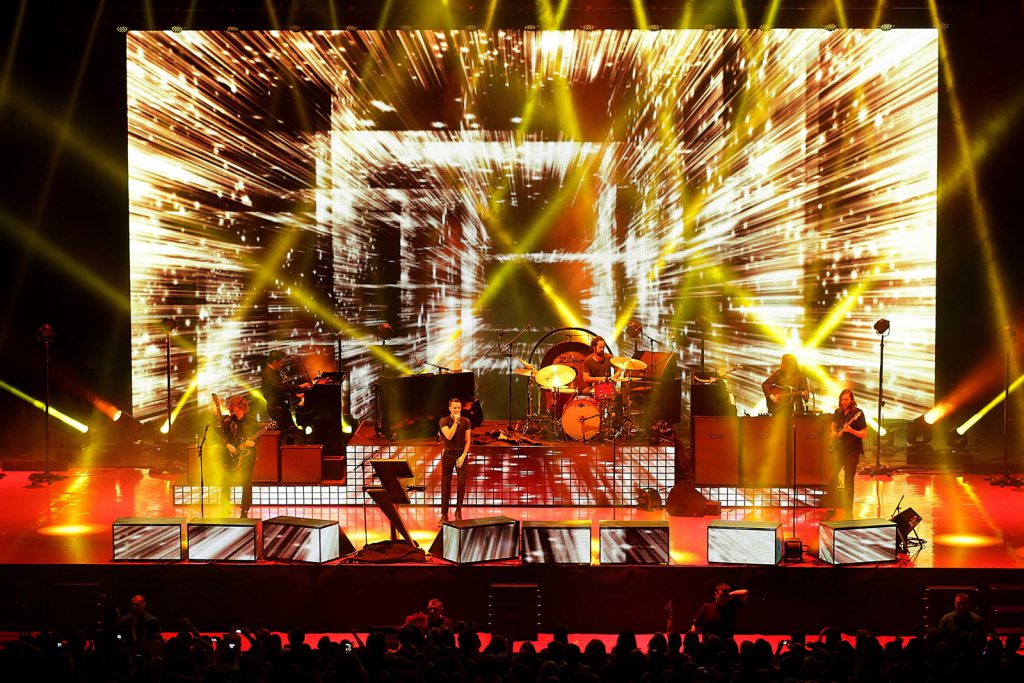 For this Irish lighting and stage designer, the process of creating stunning visuals begins not with his eyes, but with his ears. There in the music of his clients lies the roadmap that will guide him in crafting his designs. Every show, he believes, is made up of musical moments, and every moment must be lit in a way that most honestly reflects its meaning. Being attuned to those moments, Douglas deftly weaves his lighting around the performance on stage, seamlessly moving from bold to subtle looks as the music demands.

During the course of his career, he has followed this philosophy to create stunning lighting and stage designs for his longtime client The Killers as well as a variety of Irish artists like Wyvern Lingo, The Corrs and Hozier. His extensive portfolio also includes work as a lighting director for the Jonas Brothers, Alicia Keys, Rage Against The Machine and Motley Crew.

Speaking to us from his company, Coruscate Lighting Design, Douglas shared his insights on a range of topics from choosing colors, to drawing on the power of dark space, explaining how each contributes to reflecting moments in light. 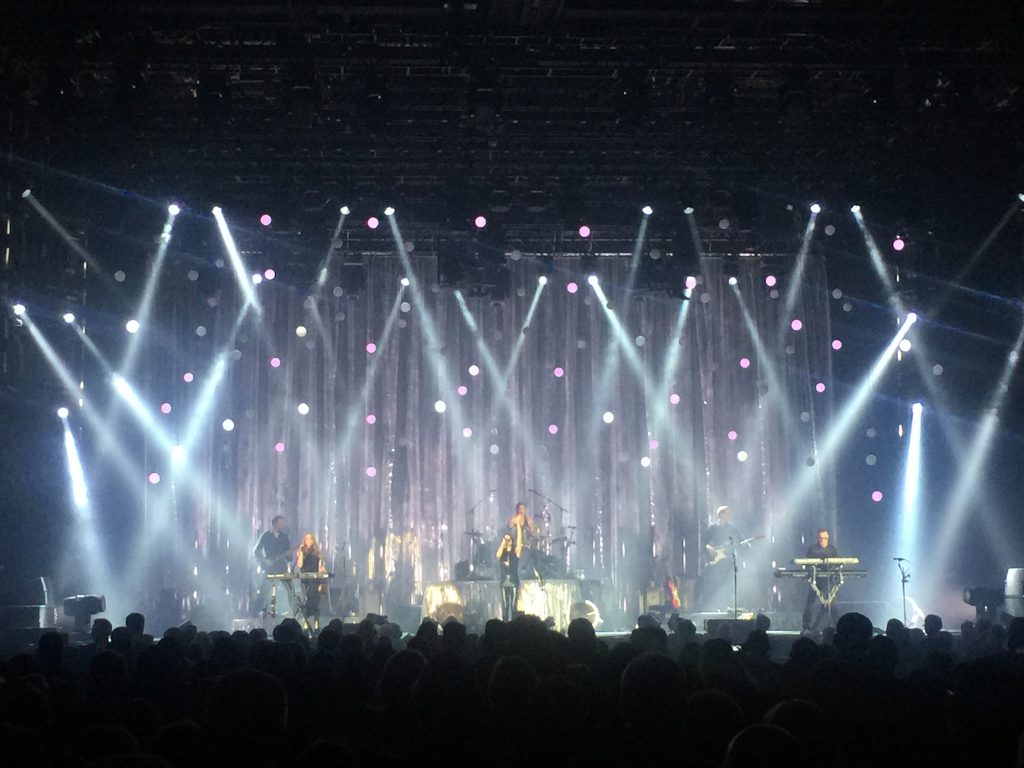 Your business name, Coruscate means “vivid flashes of light.” You certainly provide that in your work. Yet some of your designs, such as your lighting for Wyvern Lingo make powerful use of dark space. Can you describe the role that darkness plays in your light shows?
“I think darkness is a huge aspect of lighting shows, of course it has to be reflective of the music being performed. It’s nice sometimes to strip away the spectacle and just use the lights for what they were intended – to light a subject.”

Even in your work for The Killers, which has a lot of intense high points, you create moments of intimacy with your lighting. How do you use lighting to cover a range of emotions?
“As I said, you can only light what is being played. The music will dictate a lot of the looks that I find. I get the looks from the music, and these looks range from big bombastic moments to intimate ones that are created using just a single fixture. Moments show themselves to you when you listen to the song, whether it means throwing the kitchen sink in for the big moments, or having just a single fixture for an intimate drop in a song or a lonesome piano moment.”

In The Killers’ 2016 appearance at T Mobile in Las Vegas you used neon sign lights as a scenic element. Are lighting and scenic elements being blended together more today?
“Yeah I think most things involved in the production design are becoming more and more integrated – set, video, lighting, etc. It is always beneficial to the show when all departments can work in unison together to create a cohesive overall look rather than a collection of departments.”

What do you design in?
“I usually start with paper sketches and then move onto Vectorworks and draw it up in 3D from there.”

Where do you begin when you start a design? Is there something that you always look at first and then build out from there?
“It really depends on the show. If it is a blank slate and I’m conceptualizing everything, it will start from an initial idea based upon listening to the music. If there is a production or set designer then it will always start with whatever ideas are already in place and go from there.” 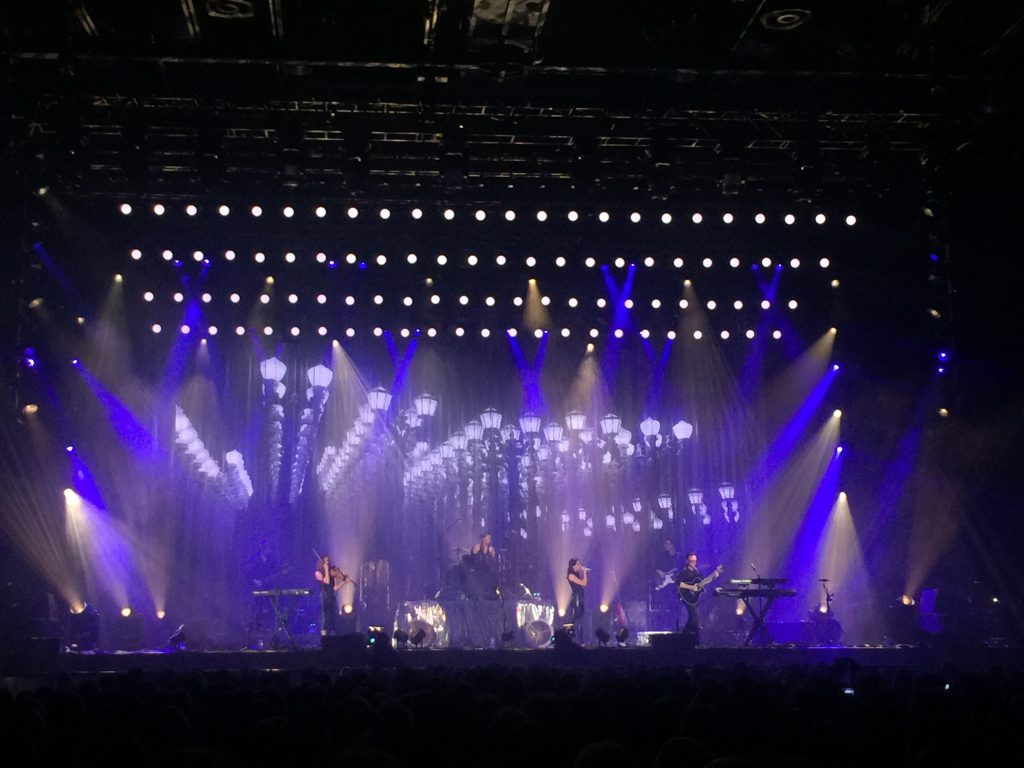 How do you get inspired when you start a project?
“I always put the music for the show through a pair of headphones and shut everything else out and see what ideas come to me.”

On the subject of inspiration — has being from a beautiful country like Ireland influenced your perspective on design?
“I’m not sure, but I guess everything around us shapes our view on things so it’s inevitable that it would make its way into your work.”

Back to your 2016 The Killers T Mobile show; you used a lot of greens and oranges, colors we don’t usually see in rock concerts. How do you decide on colors? Do you have favorite colors to work with?
“It’s all song dependent really. Green doesn’t come up that much, but I think for that song in the show it was led by the lasers. I don’t really make conscious decisions on colors for songs. I just think of certain color when I hear a song. Obviously another factor is placement within the setlist. I don’t want to end up with three red songs in a row – that would make a show boring for the audience — and that’s not what any lighting designer wants!”

Do you have to like a band’s music to do a good job for them as a designer?
“No, not at all. I think it makes the process more enjoyable if you like the music, but you don’t have to like it. I think if you appreciate music and live performance you inevitably grow to enjoy it while you work on the project. Working with music that you wouldn’t usually listen to in your day-to-day life makes it a challenge and takes you out of your comfort zone, which will most of the time only further your abilities.”

You designed a Guitar Live video game, how does that compare to designing a concert?
That was a lot of fun. I came into the project very last minute to step in and had very little time to prep and so initially I approached it the same way I would any show that was being filmed. But after the first day of shooting and seeing how we were filming from a performers perspective, my approach changed very quickly, and I had to rethink the way I would normally light a performance for camera. Having a giant camera rig pretending to be a person made it a challenge to make sure you weren’t seeing mechanical shadows being cast or reflections of the rig in things like the drum kit, etc. It changed the way I looked at focus positions and angles, etc.”

What are the three most important personality traits you need as a designer?
“Patience, understanding and the ability to function on very little sleep.”

We’ve always been impressed with how you balance video and lighting. What are the keys to doing that?
“I think it’s just about finding the sweet spot where you are not assaulting the audience visually and losing focus on the reason they are there, which is to see the band, whether in the flesh or on a screen. Ultimately everything we do is reinforcement of the performance. So, we try to underscore the moments on stage and if there are moments where we can throw everything into the mix and overwhelm them, we find those moments too.”

What are your thoughts on projection video vs. LED walls?
“That depends on the project, and most often on the type of content being used. Both have their plus and negative points for me.”

You also use lasers quite often. What do you see as lasers’ role in a lightshow? Can they be overused?
“They can definitely be overused, they are a luxury item when you get to a certain level of designing and should be treated as such I think. Again, as with everything we do it has to reflect the music, if it doesn’t work with the performance, then it is a waste of time. I’ve actually had to talk some clients out of using lasers, because I think it would have looked silly in the context of their performance. But given the right song they can be a great tool to have at your disposal.”

How did you get started as a lighting designer?
“I started in lighting by working for some local bands and then progressed to a house tech job for a few years, which taught me a great deal and allowed me to work on many different types of shows. From there I started working with some more bands and progressed my way up through the years.”

If you weren’t a designer, what do you think you would have done?
“I’m not sure. When I was a kid I wanted to be a paleontologist – and this was before Jurassic Park came out. But once I started going to shows as a young kid I was hooked and wanted to do lighting.”

Is there a Steven Douglas design look? If so, how would you describe it?
“I’m not sure if I have a set look, but I do love a good silhouette from time to time.”

What do you regard as the highlights of your career?
“I’ve been very lucky in that I’ve gotten to do some great venues all over the world. I always thought if I ever got to Madison Square Garden that I’d have achieved it all, but now I’ve done The Garden seven or eight times. That ranks up there pretty high on the list along with Red Rocks, Wembley Stadium and the Sydney Opera House.”