We have 18 SL Coolbeams, and what I'm not entirly sure on is the lenses-

There are different slots for 20 degree, 36 degree, and so on... but are the lenses different? Or is it just the differnce in where the lense is placed and not the lense itself along with where it is placed?

you need a different lense. its just like the S4's.

The lenses are different. If you take one out and look around the perimeter on one side or both there is a drop of paint. The color indicates the beam spread it correpsonds to.
T

Ah redundancy! Yet, I can't help it: The lenses are in fact different. In other words, placing a 19 degree lens in a 26 degree slot unfortunately won't get you the same outcome.

As for a little more insight into the differences, depending on the lenses some are thicker, others are thinner. Some lenses only look like half a lens (looks like a half moon type a thing, width wise, not like as if I broke it in half). Not only are the lenses different but of course, as I’m sure you already know, are placed in different areas on the barrel of the light. Some assemblies depending on the light or brand actually utilize two lenses in the barrel (in the case of the S4 it's their 36 degree model, I don't know as much about Strand but I am pretty sure it is the same thing, physics is perhaps on my side here)

The 10 and 5 degree lenses however are completely different; you can't miss those “suckers.” These two have huge add-ons since the lens sizes are so big. 10 degrees are far more common then the 5 degrees in my experience and despite their size are uncannily light.
R

Ok then, so what happenes when you put a 50 degree lense in a 36 dregree slot?
T

Though I've never actually tried moving the lenses, in theory, by moving the lens of the light into a different slot you loose a lot of efficiency. Each lens was mathematically calculated for its position, shape and size to get the perfect angle to maximize the use and increase efficiency. By moving the lens to a different location you change the angle and the focal length making the light either less intense (dimmer) or give it a smaller or larger beam, depending on what lens you place where. The light will also becomes out of focus, giving you very soft edges, possibly more soft then one would even prefer. Assuming it does throw the light out of focus (which it should) you'll definitely loose intensity on the light.

In other words, don't try it; you'll waste your time. Not only waste your time but possibly mess up the light if you can't get it back together right (though that is what assembly guides are for ). However, like I said before, I never personally have tried moving the lens, but in terms of the physics of lighting this should happen. It is entirely possible that there are other things I have left out, about what might happen, but hopefully what I stated is enough information.

Hopefully that all made sense.

well if you just move in the location of it in the barrel and you can move the barrel to focus the beam....
T

propmonkey said:
well if you just move in the location of it in the barrel and you can move the barrel to focus the beam....
Click to expand...

No, this is different. This throws the whole light out of focus. Rolling the barrel most likely won't fix something like that. It's almost as if the light (the actual light not the fixture) is distorted. It's a problem of its own. Don't forget as well the loss in intensity and don't forget, that it also doesn't give you the desired effect you want, a 50 degree lens in a 19 degree slot won't give you either a 50 degree throw or a 19 degree throw it will give you some other weird size that is most likely ineffective, not only because of size and blurred edges but because of other things. Just because of the possibility you can possibly "fix" the "blurred" edges, which by the way, I doubt you can do in this case (though I could be wrong), doesn't mean it works. In other words, just don't do it. 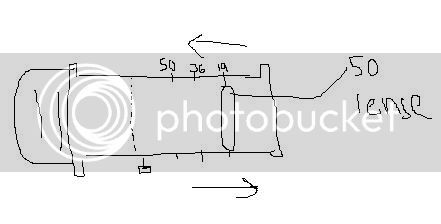 because if you move the lense more down in the barrel you can move the barrel back therefore changing the distance from the reflector to the lens. is anyone understadning what im saying?
T

Haha, I just realized something. When I say "rolling the barrel" I mean moving it forward or backward in other words, sharpening or softening the edges. It's become habit for me to use this phrase because so many designers I've worked with in the past have used that term to say soften the edges. So re-read my post because I am in fact talking about moving the barrel up and down to soften the edges. I did somewhat hint at that is what I meant, but unless read closely, it probably wouldn't have been associated correctly with what I meant to say.

But I'll re-word it a bit to specifically answer your question: You're taking a 50 degree lens, made to have a shorter focal length, and lengthening the focal length to an even greater distance... However, assuming you meant something like putting the 19 into a 50 and then moving the barrel, so that is is the same distance it would if it were in the 19 degree slot, then perhaps it would work (assuming you can actually move the barrel that far which I highly doubt, the distance between lenses is far more then the distance the barrel will move), but why on earth would you do that, it will produce the same outcome if you leave it in the same slot? For sh*ts and giggles?....

Like I said the lens is mathematically figured out to be a certain distance from the source (focal length) for its shape and size (width) changing this distance at all alters the entire beam.

PS. Sorry if that doesn’t make sense, I’m quite tired, Tech week is starting to wear me out a bit, too many things going on in one week this time. Ah well, what can you do?

ok, i understand. i thought i wasnt explaining what i was thinking correctly.

why doesnt that work though? besides cuting the beam down some, i dont see why it doesnt work.
T

Ugh, you beat me to my edit, re-read my post before yours for the explanation. Sorry, I decided to add detail but I didn't get it done in time.

ok, ignore my last post it was made before you added more. i dont know any reason anyone would actully do it i was just thinking in theory why wouldnt it work. it makes senses now.
T

One more thing, your question about the barrel just made me realize something. Here's a good visualizer for everyone. When you soften and sharpen the edges you are indead changing the focal length by a tiny bit. Look at what happens to the beam when you go too far in either direction. It distorts and begins to look really funky messing with the the whole beam, not only the edges but the size changes a bit too. Now think of that on an even bigger scale, that is basically what happens when you put a lens in a different spot. Of course, it's going to be a lot worse then just throwing the light out of focus via moving the barrel.

the theatre im working at right now, i could see all the instruments were soft, they used diffusions but at first i thought they were just focused soft. otherwise youre losing to much of the output if you move the lense. i think i got it now.

what would also probably happen if you moved the lenses is actually projecting a detailed image of the lamp and reflector onto the stage.
F

Another problem with doing this, even if you are okay with the distorted light on the stage, is that it would be physically impossible to focus a gobo.
L

OK, a somewhat realted question, what part of the ERS actually inverts the image. I have heard that it is the lenses, and I have heard it is the reflector. I was then convinced on the reflector idea because it makes an ellipsoidal shape, which has 2 focal points. the forst focal point being the bulb, and the other being beyond the shutters/gobo/iris slot therefore, the beam crosses after the shutters/gobo/iris, thus inverting it. (the iris of coarse doesn't matter, since it is...an iris...)
But, then, I was walking around with a lens tube, and looked down, and saw my feet in front of me. (36 degree) I was holding it at about the same height as to where we drop our electric down, and focus them on the ground. If my feet were inverted, and the reflector is also inverted, it would just cancel out. So, I guess my real question is, where are all of the focal points in an ellipsoidal (particularly S4, if it matters).
(a diagram like propmonkey's showing the path of light would be helpfull)

Another random question, we also have a lot of Source 4 Pars, and when you look through the lens at the bulb, it looks green, yet they all give off white light, and the bulbs are regular HPL's (with the little pokey thingy to lock it in...you know what I'm talking about...). I have tried to take the lens out, but I'm not entirely sure how (all the tiny screws holding the front together looked important, and I didn't want to tinker without knowing what I was doing.) So, unless the reflector, or something down there is green, then why in the world does it look green down there, and why the heck did ETC decide to have the lens spread the beam out like an oval, and have it be rotatable...

Anybody who can answer these questions gets browny points...
L

The first inverting is at the gate (where the shutters are) of the fixture. The ellipsoidal reflector does the first inversion and then thereafter the lens pair does the second inversion, that is why you have to insert gobos upside down.
You must log in or register to reply here.
Share:
Facebook Twitter Reddit Email Link