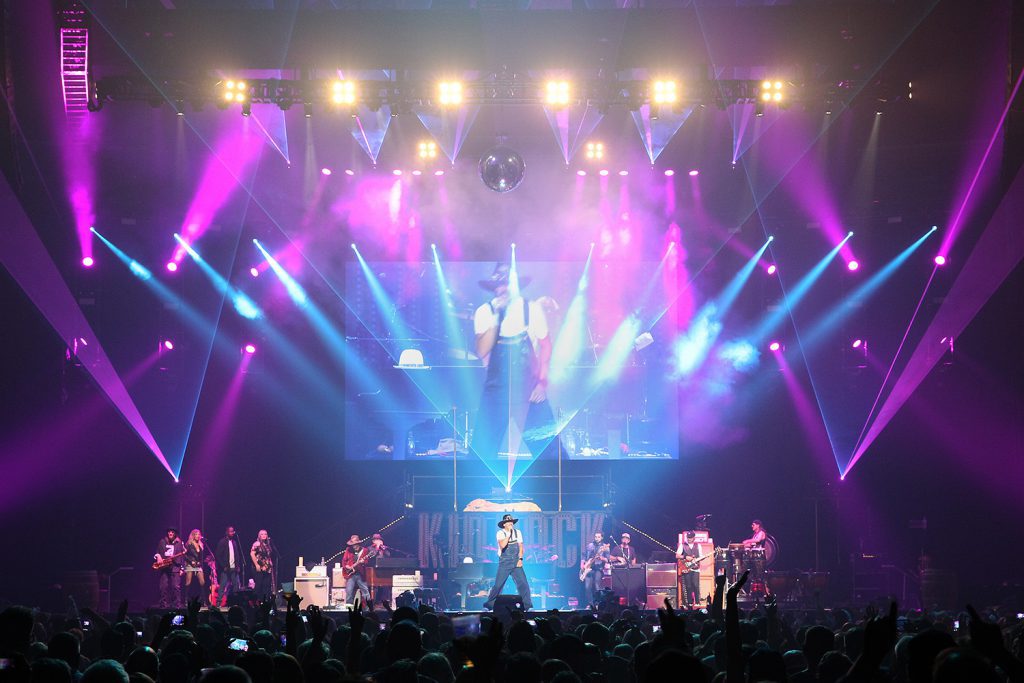 Covering 650,000 square feet and rising eight stories above the ground, the new Little Caesars Arena stands as a symbol of the comeback taking place in America’s “Motor City.” Detroit’s hometown hero Kid Rock recently christened the multi-use complex by performing its inaugural concert as part of a six-night home stand that sold out in one day.

Just before he took the stage, the arena’s house lights went dark and Journey’s Don’t Stop Believin’ (the city’s unofficial anthem) blared over the PA. When the song’s famous line “Born and raised in South Detroit” came on, the entire hall erupted with cheers and, as if on cue, the darkness was simultaneously blown away by intense bright light.

This lighting salvo would be the first of many ballyhoo moments in the rollicking Little Caesars Arena kickoff concert that designer Nook Schoenfeld dramatized with STRIKE 4 fixtures from CHAUVET Professional. Kid Rock’s longtime LD used 12 of the multi-formatted luminaires supplied by Upstaging, Inc., flying the units 40-feet in the air, six across the front truss, two on the middle truss to light the first ten rows, and four on side truss to provide 270° lighting in the arena.

In addition to providing intense bursts of light at key moments during the two-hour show, which featured a guest appearance by Uncle Kracker, video salutes to veterans and Detroit sports legends, animated stage skits and hard-driving music, the STRIKE 4s helped facilitate Kid Rock’s strong connection to his audience.

“This artist has a close relationship with his crowd and wants to see them,” said Schoenfeld. “We make the crowd part of the show. It’s just one big party, where Kid Rock demands audience participation at times — and they give it to him. The STRIKEs provided us with some good focused audience light. They have the ability to manually pan/focus each cell wherever I want. I can hang the fixtures straight off the front truss, yet focus the bulbs at one designated section of the arena, without any extra pipes and clamps. My artist actually calls out certain sections of the arena at one point during his performance. The STRIKES allow me to light up certain sections while leaving others dark. Bob (Kid Rock) and I appreciate that.”

At times, Schoenfeld also used the STRIKE 4s to set the stage for the concert’s stunning laser light show. “The STRIKE fixtures serve as a tool I use to close everyone’s eye for a fraction of a split second,” he said. “Then when they open their eyes again, they would see a cool laser look fill the entire arena. The reaction is like, ‘Where did that come from? Holy cow, that’s cool.’”

“I work hand in hand with Scotty Wilson from PDI, who programs and runs my lasers,” continued Nook. “We follow parameters, so we coexist. I will never bring up the STRIKEs if we are at a part of the show that demands a big laser look, because that would defeat the purpose of what we’re doing. But we trade off quite a bit, so I can slam the audience in the face then black the Strikes out in zero time while he slaps in a solo laser look. The audible gasps Scotty gets us are lovely.”

The versatility of the STRIKE 4s made them invaluable tools for creating the wide range of looks needed to support Kid Rock’s diverse mix of music, which glided smoothly from classic rock, to hip hop, to rap to country to ballads during the Detroit show.

“I run the STRIKEs in a mode that gives me individual control of each cell as well as the overall dimming curve for the bulb,” says Schoenfeld. “If I need them to fade slowly like you do with a standard DWE bulb, I just switch the mode in the cue, which – by the way –gives me a beautiful orange tungsten tint. But sometimes I want the STRIKES to act like a kick in the face with an immediate bump-on with zero lag time, I also have that ability to do that.

“Plus I strobe the hell out of these suckers,” he continued. “That’s the beauty of this fixture! I understand stadium acts needing 100 quartz tungsten fixtures, but in this day and age, why would any LD settle for something that uses megawatts of power, boxes of cable, and are heavy, when these STRIKEs can emulate that and do so much more? When people talk about why the love the ‘Attack and Decay’ of tungsten, I chuckle. They haven’t tried these fixtures yet. Plus tungsten lights can’t do a random strobe effect. Enough said.”

Schoenfeld, who drew his plot in Vectorworks and programmed the show at Upstaging’s Previz suite for a week with his “old pal Eric Wade,” says that the power-packed show at Little Caesars was the result of how his lights were used, not how many were on this rig. “I don’t require a lot of lights, but what I do like to do is use everything that I have on my rig to its maximum potential, and spread it out across a wide span,” he explained. “We aimed for a big rock show in Detroit, and following this approach, that’s exactly what we provided.”

Indeed he did, and if future shows at Little Caesars Arena match the intensity achieved on this warm September night, the Motor City’s comeback showcase venue will remain in the fast lane. 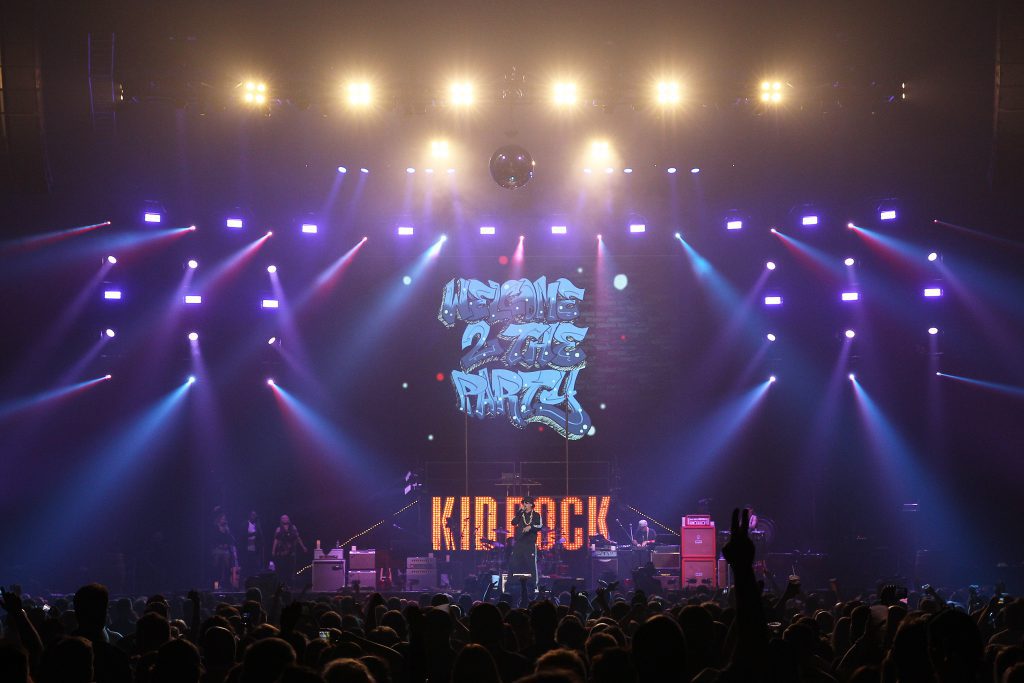 Photo: Todd Kaplan
You must log in or register to reply here.