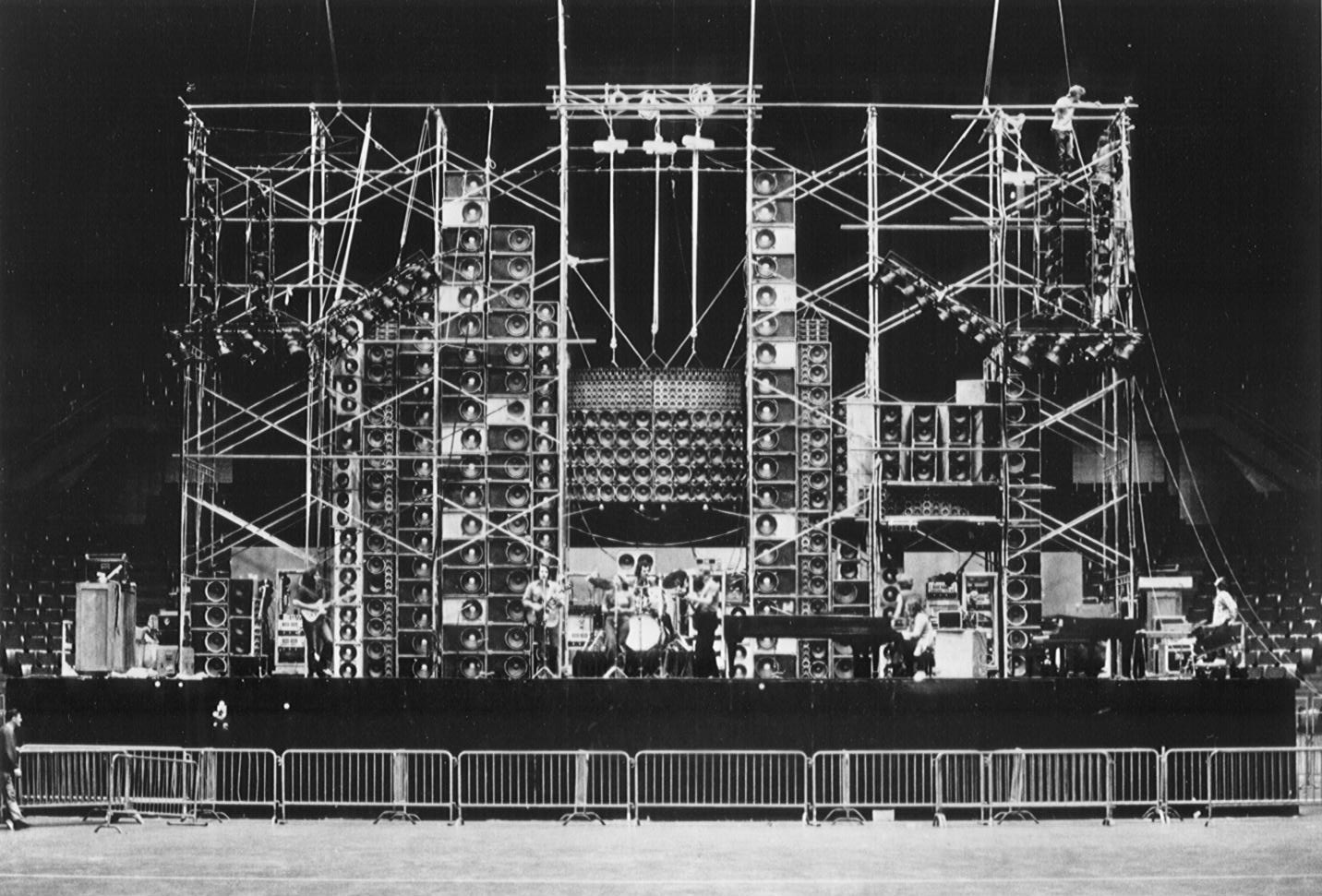 Looks like it would sound as good as the rigging holding it all up/together...I'm thinking the toilet-bowl sound - anyone else?

Other than the gain before feedback issue, I bet it sounded phenomenal, for its time. STEVETERRY was probably there, maybe he can tell us.

That's one of the Grateful Dead "wall of sound" rigs circa 1973-74. It is important to understand that the concept was essentially a separate system for each source (in fact the bass was treated as four sources, one per string) and every speaker reproduced only one source. Being behind the band the system also served as the monitor system, letting the band hear the same mix the audience heard, in fact mixing was from on stage. Feedback was avoided by using a dual 'differential' mic approach where each vocal mic had a second identical mic attached to it that was wired out of polarity so that when the two were summed most of the system content was cancelled out. A good summary of the system is posted here, http://dozin.com/wallofsound/index.html

Before dismissing this system, realize that not only was this system very technically advanced at the time, but the concept of separating sources is also gaining new popularity. For the last Red Hot Chili Peppers tour, Dave Rat used a dual line array configuration that allowed assigning sources to either array, thus reducing the 'load' each array carried and providing increased clarity. For example, you're not asking a speaker or driver reproducing the vocals to at the same time reproduce the impact of a snare or crash and vice versa. So sometimes the idea that everything old is new again can also apply to technology.

Brad that system may be technically advanced for the time, and might sound very good........ But it would still give me nightmares to be an audio tech for that tour.

those parcans would have made those speakers buzz fiercly
E

glad im not the only one thinking that, haha

looks like a great system for the era
J

The rig was a tour nightmare. The inventor, a Mr. Owsly, was more famous for his Morterey Purple LSD then his work in sound. The Dead lived in his house for years where the only things to eat were red meat and acid. The Dead eventually canned Owsly because the rig was such a tour nightmare. Him and his Altec Voice of theatre bins currently reside Australia because he suspects mass disaster in North America is upon us. An intense case of the crazies aside, I'm with MuseAV; the concept (setup aside) was bitchin'. The system removes the phase and headroom issues of a conventionally mixed PA, but if you've never taped a 57 to a 58 then this might be to old school for you to handle.
You must log in or register to reply here.
Share:
Facebook Twitter Reddit Email Link