What is a gold cue?

SteveB said:
I never played with a Performance. I only recall what folks told me about how it functioned. I don't recall anything like this on the larger Performer desk.
Click to expand...

You have that backwards. PerformANCE was first and large; PerforMER came about two years later and was small enough to tour.
And yes, Performer is the only one I know of with an unlabeled gold button. I'm pretty sure the Performer I didn't have it, and I don't know what they did with Performer IV, but I think not. So really we're only looking at Performer II/III.

FROM STEVE TERRY, 3 Jan 2020:
"The Performer was the outgrowth of the TI 99000-based Performance--which was a Kliegl response to the Century Multi-Q from David Cunningham. Performance was physically huge and cost in the neighborhood of $40,000. It was the first implementation of a 16-bit on-chip microprocessor in a lighting control system. Production Arts bought one of them to run a big animated Coca-Cola sign for trade show applications. It needed a roadbox the size of a small house. Performer used the same processor.

Performer was dreamed up by Gordon and Steve Carlson. The first implementation of the hardware was executed by Precision Controls, Kliegl's electronics subcontractor. It was fairly unreliable, but still sold a lot. Production Arts ordered five of them at $15,000 each. These Performer I units can be identified by the red top on the enclosure. They were the first memory consoles in history suited to rental use. There was no FedEx at the time, but the frequent replacements could be shipped by Greyhound bus.

About 18 months later, the Performer II/III was released. Steve Carlson did the PCB layout, which eliminated the very unreliable mother/daughter two board arrangement of Performer 1. Performer II/III has a black top cover. Production Arts bought about 15 of these units--they rented for $500 the first week and $250 per week thereafter.
Click to expand...

Production Arts bought one of them to run a big animated Coca-Cola sign for trade show applications.
Click to expand...

I remember the Lighting Dimensions article on this. IIRC, the hardest part was the stripe underline. 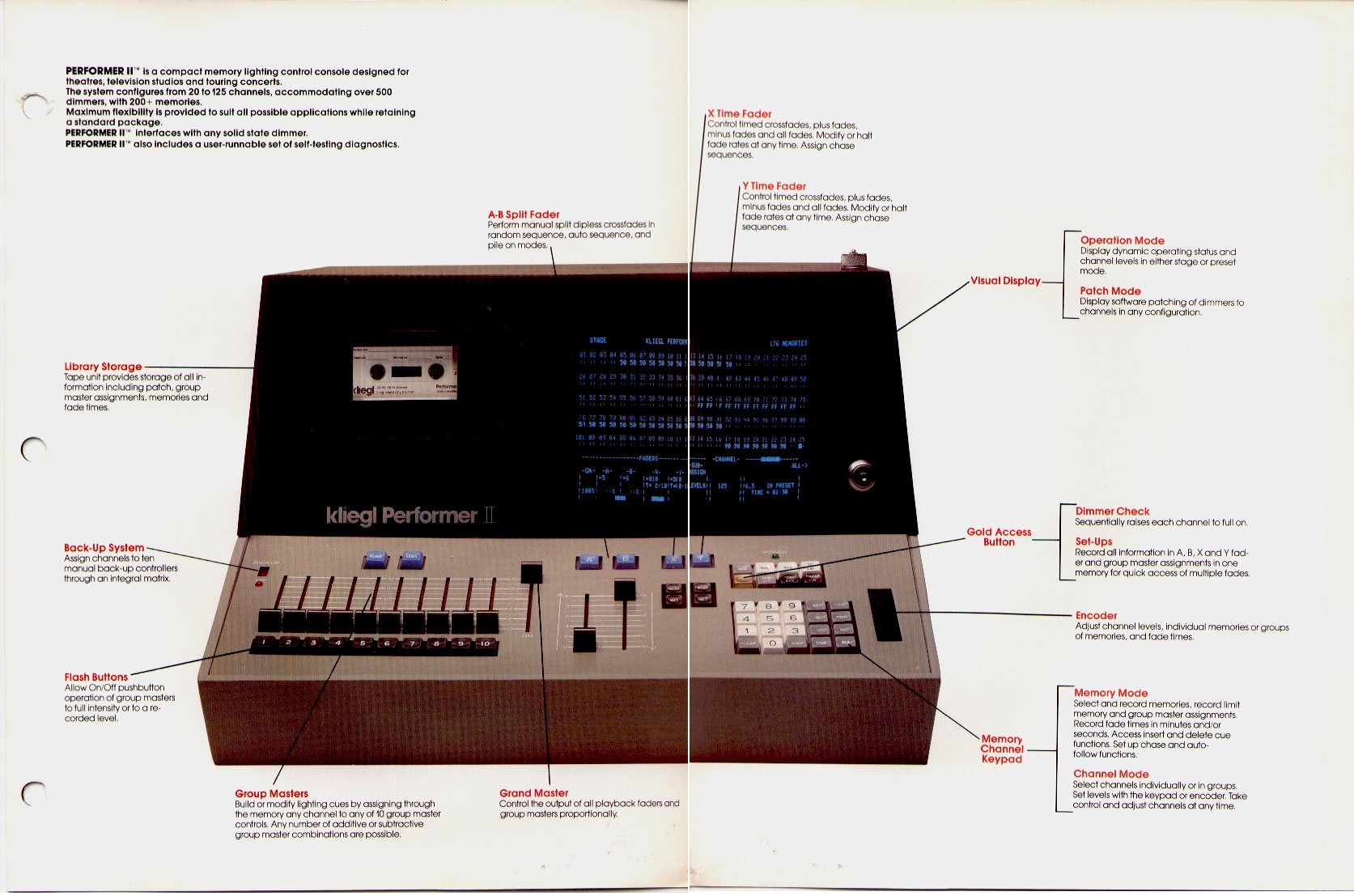 indicates the "Gold Access Button" is also used for Dimmer Check, but I have no recollection of that.
Last edited: Jun 1, 2022
"Hold your hat and hallelujah, Mamma's gonna show it to ya!"
​

Premium Member
It's been over 30 years since the last time I did anything basic in college with that board. Thanks for making me feel young in not knowing.

derekleffew said:
I contend, without any proof whatsoever, that all this came about because Morpheus Lights chose to use a Performer to run their early moving lights, PanaSpots and PanaBeams. The control eventually morphed into the PanCommand system.
Click to expand...

More than you wanted to know about Performer II/III operation:

derekleffew said:
Around 1988 came a software update that allowed 34 gold cues (gold 00 thru gold 33). Since we're now dealing with two digits, One pressed and held the gold key while also pressing the first digit. Then let go of everything and press the second digit to execute.
Click to expand...

A colleague tells me that his Performer III at a casino in Reno/Tahoe allowed 100 (00>99) gold cues. It was serviced by Morpheus Lights. Mine in Chicago came from BASH in New Jersey.
"Hold your hat and hallelujah, Mamma's gonna show it to ya!"
​

Late to the game......I ran and programmed a couple shows on this. As I remember, the gold cue reloaded the 10 pre-set faders where you could run your effects. It also stopped any chase cues that were running at that time. 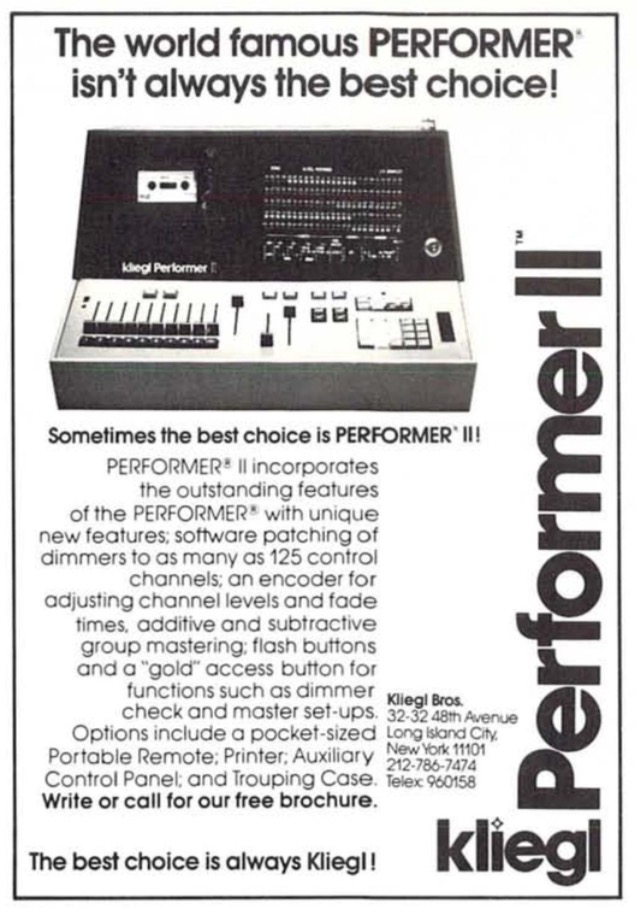 Premium Member
I programmed with it... many years ago. No Manual for hearing about any such gold cue. Ah' our modern times back than Yet it worked when modern and was advanced technology. Art was made with such boards, and Art given the technology availability when it was modern should be respected.
You must log in or register to reply here.

K
Lots of cues and no time to program