What Would You Do? - Firecracker Effect

For a fantasy effect of fire-cracker, we've used a flash pot and the actor mimed throwing something, setting the flash pot off a split second later, which was triggered by a violinist who made a 'screach' on the violin as she set it off.

We've also had the actor mime throwing something, and used a 'Party Popper' (found at Wal-Mart) off stage for the sound.

We've also used flash paper. It's really a great effect. Just use a glow plug to ignite it, and have the actor toss it. If done right, it's safe and will burn up before it touches the ground.

We've also used real fire-crackers. (The kind you throw on the ground hard to make them go off-not the ones you light.) We lay down a some fire proof lining, and a metal sheet on top, and just throw them on the sheet, which is then pulled offstage.

We've never used the firecrackers you light, but we did to a comic bomb once. It was a bowling ball that was painted with black fire resistant spray, and then gaff-taped some flash string to it. That worked well.

I remember reading a story 30 years ago about a Firecracker effect gone wrong . . .
Seems that a stage production had dressed a guy up to look like a firecracker with a rope for a fuse. Another actor was trying to light the fuse with a real lighter while a bag of cooking flour was dumped on the guy to simulate the explosion. Turns out that flour is explosive as a dust in the air and it detonated. I can't remember the outcome, but remember that many kinds of dust are explosive as dust in the air.
I tried to search this story on the internet but the search words are too common to find it easy.

Yep. Sawdust, non-dairy creamer, and many other dry particles in the air are EXTREMELY flammable. Didn't they see the MythBusters episode??

It's been known since at least the middle ages. After a few mills blew up, they found that they could not make flour at night. They even used that as a plot line in the Michael Crichton book/movie Timeline.
Last edited by a moderator: May 30, 2014

Kind of an old thread but since it is stuck at the top, i might try. First off, CSCTech,

Or maybe if the house has wall scones
Click to expand...

. It would be awesome if my theater had scones on it. Although it might get bad after a while. (A scone is a pastry. A SCONCE is a type of light on a wall.)

Second. I might find a place to put a fog machine facing the audience in the place you want the effect (with it hidden). I would try to focus some extra lights with different shades of red and orange gel facing where the fog would come out. Then, with timing practice) you set the fog machine to go, play a sound effect, and flash the colored lights. I don't know if it would work, but it seems plausible. I would try to put the fog machine vertically, then it might look more like a string. Then, there would also be "smoke" from them. You could even put a fake string in the spot the could be pulled away during the effect. Confused yet? Hard to remember while typing.
T

see if you can find some egg strobes and paint the glass red, orange and yellow, and make your strings.
Last edited: Apr 12, 2012
A

I can think of three possibilities...

1) A lamp inside a pair of long (length-of-firecracker-string-ish), counter-rotating tubes with small holes that randomly align to reveal the light source. Scraps of gel over a few holes wil add to the illusion. Downside... firecracker cues will typically be a one-time cue and I just don't trust motorized effects to function on cue (usually due to my kludgey craftmanship).

2) Use a small light source aimed at a small audio speaker cone with tiny mirror facets or sequins glued to it. You could have any audio signal controlling the speaker (maybe playback of firecracker audio effects?) and use the reflected light to light your 'prop' firecracker strings. Downside... small total light output.

3) Make/modify a fanbox to blow streamers of opaque black material with either small grain of wheat style lamps (or LED's) at the ends or reflective mylar, so the lights/mylar are obscured and revealed as the streamers wave.

What I would do would create a random flicker effect with a series of LEDs on the arduino, several different channels. To build it, oi would insert LEDs into small tubes or just firecrackers with the cracker stuff scooped out. Wire them up to a small box with three AAs and a ATMEGA or something similar, and a switch. Flick it on, throw it on stage, and have the sound guy play some loud firecracker sounds. Bonus mightbe to add some sort of smoke effect, would have to research that though.

Here's something sort of similar I did to create a grenade fuse on stage:
T

ajb said:
So I'm picturing a firecracker string like this, is this what you had in mind cdub? 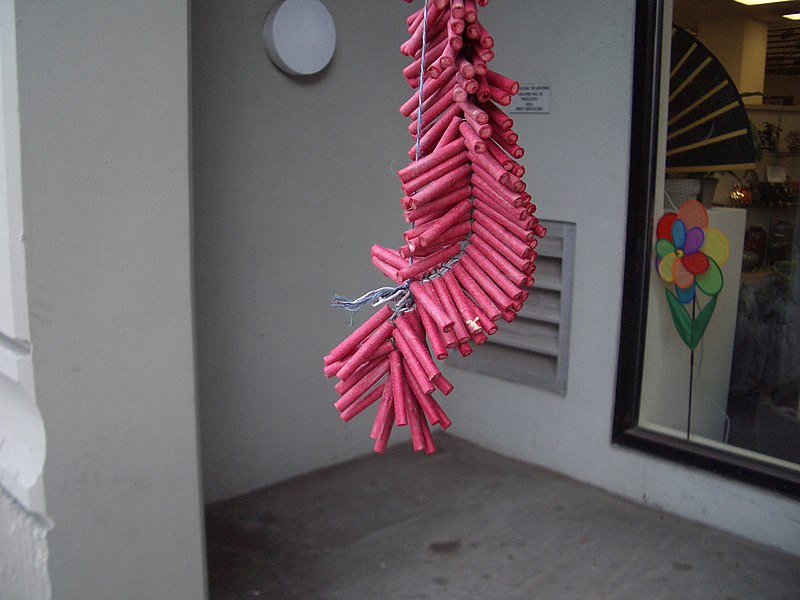 If so, that changes things quite a bit from what it seems some people have in mind.

I will stand by my idea for the time being, with an addition: some smoke and localized sound would really help sell the effect!
Click to expand...

Four years and waiting! We just finished a shoestring production that peaked with a firing squad in the next to last scene. Kind of like firecrackers, right? The firing squad scene was staged behind a Chameleon scrim. The upstage blacks were open to expose the brick wall behind the stage. (Up until this point, action behind the scrim had been against black) I simply hung two 150 watt clear incandescent lamps on the brick wall in the general location of the prop rifles. The firing squad was between the brick wall and the scrim on stage right. The protagonist who was about to be shot was likewise behind the scrim on stage left. It went like this... Audience attention was 100% on the character being shot as he shouted his last words. Very loud gunshots played off a wave file while the two incandescent lamps were flashed alternately in a series of rapid cues. In this prolonged instant of "gunfire" the entire scene went black behind the scrim and music came up immediatley to play under the final scene. It didn't have to be convincing, it just had to have an unexpectedly impressive impact. Many asked how it was done (I cautiously file that question under "compliment"). Success was clearly due to misdirection. The cheap flashing 150 watt lamps looked great because everybody saw them out of the corners of their eyes. The halo effect of the chameleon scrim and the LOUD sound effect put the icing on it. Everyone was riveted to the shouted words of the condemned hero. Didn't give them time to think about it.

My way was borrowed from some graphic-novel stylized ideas made popular by movies like Sin City and Scott Pilgrim. Used this gobo:

with a red gel,
along with a custom gobo that said Snap! Bang! Crackle!. Put them each in an LED Source Four and set up a sustained strobe effect shot at the Cyc after the actor threw the "firecracker". Good times.

Some pars with a step chase various timing, combined with led pars random strobe. Regular pars give the slow decay while at the same time the leds quick "pop" in color.
B

E-Crackers like they usei in haunted houses? but be careful they use an open arch so they can be dangerous. heres a link.
http://www.hauntedprops.com/product-p/hpp0961-fcrk-1.htm

gafftaper said:
@cdub260 Hey Cdub, it's been 4 years and you never told us how you did it!
Click to expand...

Alright ya whiners! So impatient!

Here's how we did it. We used eight American DJ Flash Ropes with the strobes tight packed on a board, one board SR, one board SL attached to the front of the stage building. This was combined with a firecracker sound effect. The flashing was a random order, but it got still got the point across. Setting it up was dead simple. It took a couple hours with a cable stapler to attach Flash Ropes to the boards, but that was the hardest part of the entire process. After that it was just a matter of coordinating a light cue with a sound cue.
R

cdub260 said:
A few years back, the Pageant had a firecracker effect in the show. Pyro was not an option given our venue's proximity to brush land coupled with a very dry year. We were able to pull off the effect using non-pyrotechnical means, so I know it can be done. I know how we did it. Now I'd like to know how the CB community would pull off this effect.

Please give pro's and cons of your chosen method.

Lets see what you come up with.

A company call FrightProps sells an electric firecracker. I have a few and they are loud. They are AC powered and are much larger than a regular firecracker but it could be built into a string of fake ones. Here is a link:

I'd need to see a live demo in order to determine whether this would achieve the visual portion of the effect. It looked a bit underwhelming in the video.

cdub260 said:
A few years back, the Pageant had a firecracker effect in the show. Pyro was not an option given our venue's proximity to brush land coupled with a very dry year. We were able to pull off the effect using non-pyrotechnical means, so I know it can be done. I know how we did it. Now I'd like to know how the CB community would pull off this effect.

Please give pro's and cons of your chosen method.

Lets see what you come up with.

If this was "You Can't Take It With You", I believe the director in my high school show chose to ignore the fire code and have a stagehand light firecrackers, with another stagehand nearby with a CO2 fire extinguisher. I was running lights so I didn't find out about the "special effect" until one night when I wandered backstage during intermission and found out about the large wooden box lined with aluminum foil and topped with a metal screen, which was hidden out of sight when the fire marshal had inspected the stage.

You asked how we would pull off this effect in a theatre with a strict fire code. This answer fulfills all the requirements, since "adherence to the fire code" was not one of the requirements.


cdub260 said:
The effect we did had to give the appearance of a string of firecrackers going off in the house, not on stage. So yes! There is a visual element!

I'd have thought this would be fairly obvious as I didn't post this in the sound forum.

Even so, this is largely an exercise in creativity. I'm reasonably certain that there are no right or wrong answers to this hypothetical question.
Click to expand...

Yes, this is much more challenging. Looks like an air pressure system would be easiest, with small balloons popping in each pink firecracker. Air pressure would be increased as each firecracker exploded, and the hissing of the air escaping would create the sound effect of a fuse burning.
Last edited: Jun 16, 2018
You must log in or register to reply here.