Menu
Log in
Register
Page Comments Categories
The most common connector in the entertainment lighting industry, and also the oldest. Simple, right? How could something so ubiquitous, and selling for around $5/each, possibly be complicated? Well, for starters there are three basic shapes and at least four different termination methods, and nine, I think, current different manufacturers. Since the 20A 120V is far more common for live entertainment use than the 120V or 250V, 60A or 100A, we're going to concentrate article on the "normal, regular, standard, stage pin connector."

Recent History
When I started in lighting in the 1970s, 2P&G (aka slip, Bates, Stage Pin, stagepin, SP, GSP, Grounded Stage Pin) connectors were simple. There was one manufacturer: Union Connector, and just a couple of styles: two-pin or three-pin; cable or fixture mount; and of course gender: male and female. The gender and size are the only two items that have remained constant over the years. Fiber plugs have been eliminated, and even that odd rectangular shaped with three cover screws and the green plastic cover that Strand Century used for a time has disappeared. 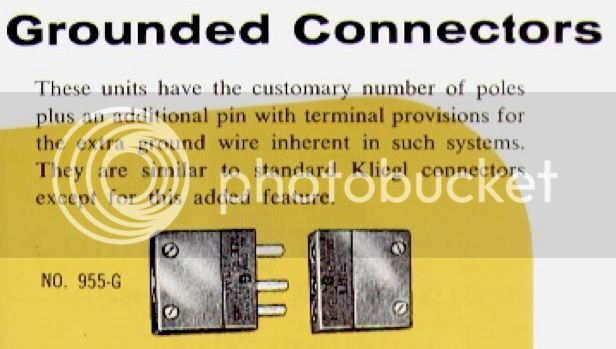 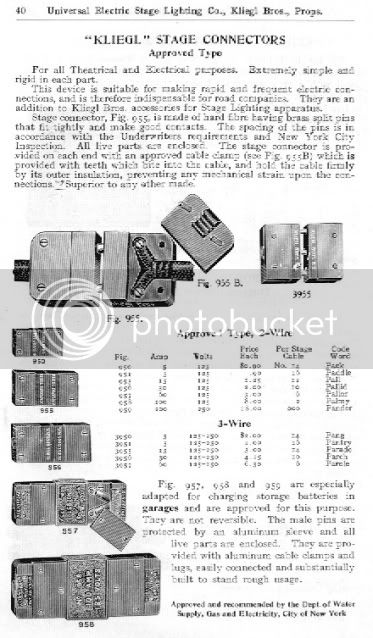 From a 1913 catalog on klieglbros.com.


An old Kliegl Fiber connector, cable mount, prior to 1970-ish?: 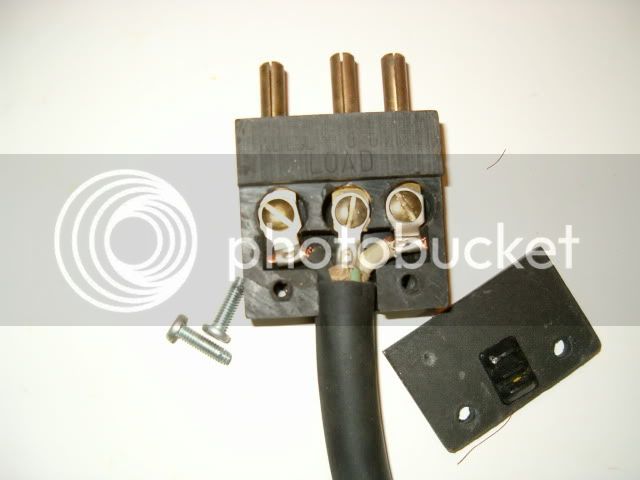 Notice the hot and neutral wires use 90° Flag terminals. There's no way to fit three straight terminals inside the plug. Note that even the round ring terminals had to be clipped to fit inside--this plug was designed for the wrire to just wrap around the screw (more on that below). 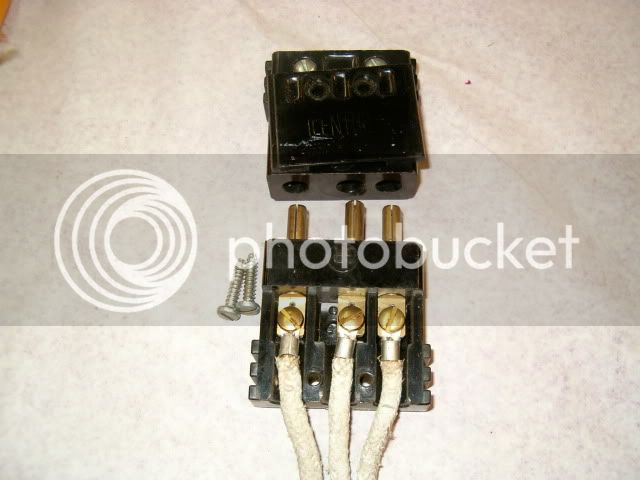 Notice the three channels for the three asbestos leads. At the time, all fixtures had individual asbestos leads. Notice also that the covers are not interchangeable. The spacing for the cover screws is different. Thus one had to order both Fixture and Cable Males and Females. (The Female Fixture connector would only be used on the pass-through of striplights.) Pictured is a Union Connector brand, although the cover is stamped Century, appropriate as the connector is attached to a Century 18" Scoop. Covers could, and still can today in the correct quantity, be ordered with a name or logo embossed on it. Usually this was/is the name of a manufacturer or vendor. (It has always been my goal to work in a venue with its name on every connector. All it takes is ordering a ton of connectors or covers at the beginning.)

The current manufacturers are below, roughly in chronological order. Thankfully, due to market demands, as well as this USITT document USITT, and this ESTA standard: ANSI E1.24 - 2006 Entertainment Technology--Dimensional Requirements for Stage Pin Connectors, all with mate with all others of any manufacturer. Note the documents only discuss pin size and spacing, and do not encompass any electrical or ergonometric specifications.

Rosco US : Connectors Introduced to the market about 1982, Rosco's version, with its refined shape less susceptible to snagging and replaceable pins, was the biggest improvement since plastic replaced low density fibre in connector bodies. Previous Rosco connectors were labeled as "Stage Connectors, Inc.," and there are still thousands of these installed. Today all Rosco connectors feature two termination methods, as well as a beryllium copper spring insert in each female pin. The spring serves two purposes: insures proper contact, and holds the male pins tight. Also, all connectors have removable strain relief inserts to allow the connector to be used with a wide variety of cable sizes.

Bates 20 Amp Male Inline: all colors & terminations | Marinco Although the name goes back to probably the 1920s, it was dormant everywhere except Hollywood until Advanced Devices resurrected it in the 1990s. Today's Bates connector may be the most popular of all stage pins, if only by a small margin. 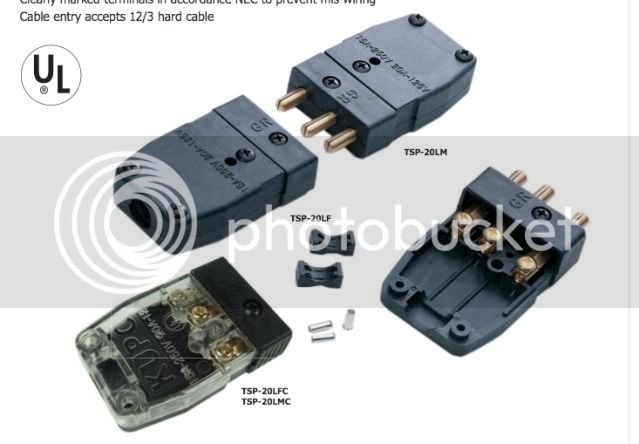 20 Amp Devices
At some prior time, PinTech also manufactured connectors with a slightly different shape. 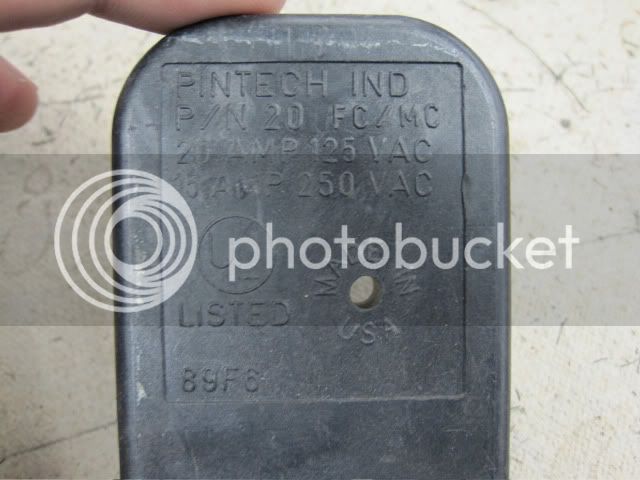 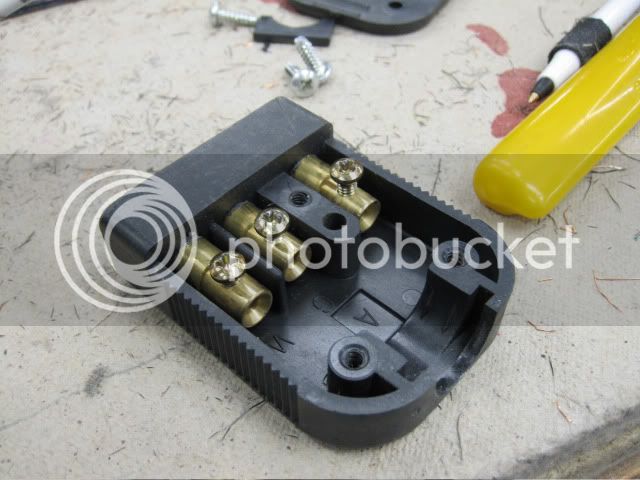 7. TMB ProPin (no information on site other than this down-loadable PDF.) 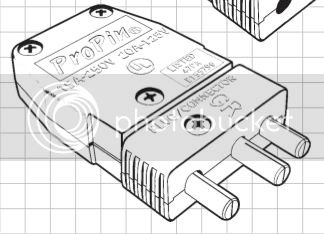 ProPin Introduced about 2001, and easily confused with the Advanced Devices Bates connector.

8. Group5/Marinco (One of two manufacturers to offer a 100A 250V with pin spacing different than the 100A 125V--the other being Mole-Richardson)

Group5 20 Amp Male Inline DSS: all colors & terminations | Marinco Made from a nearly industructable high-density fiber, their 20A versions are significantly, about three to four times, more expensive than other brands.

9. Leviton (Cannot find pin connectors on website, only this PDF found via Google.) 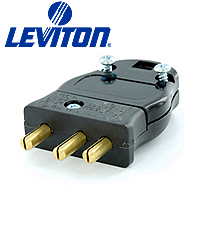 Trapezoidal: Bates, ProPin, PinTech, Rosco, 2" wide x 3" long x 3/4" thick. The reduced width and rounded corners at the cable end is to prevent snagging on other cables and connectors.

Other: See PinTech brand above. It is believed that this shape has been discontinued. 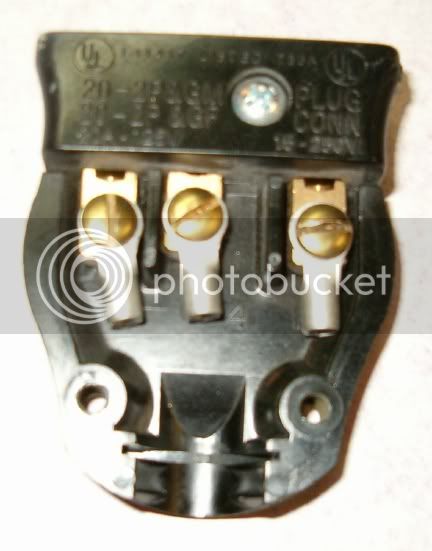 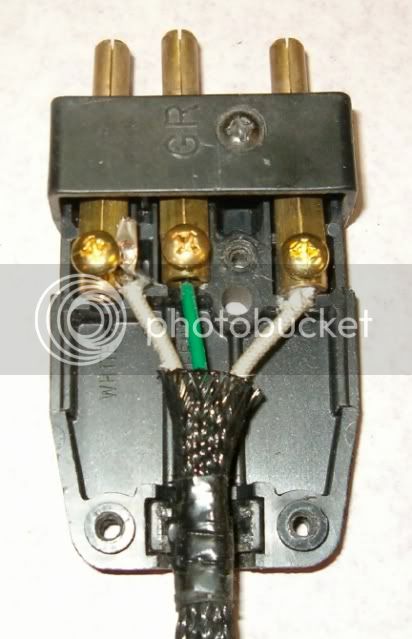 A barrel shaped terminal is crimped onto the wire, before it is inserted into the back of the pin. Notice the neutral wire has been removed to better show the ferrule. If the ferrule is missing, sticking the bare wire into the pin is ill-advised, as often tightening the screw will break the strands. 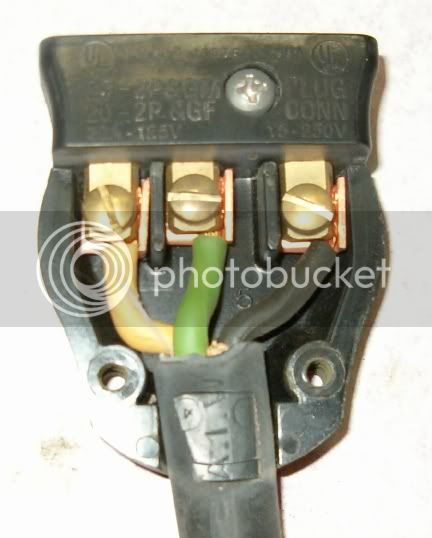 The only attachment acceptable for bare wires. These sometimes have a problem with loosening over time.

Crimp directly onto pin:
I believe it's the ProPin and possibly another manufacturer, that offers the option of crimping the wire directly onto the pin. I've never seen this, so am not sure how that works. A manufacturer-specific crimp tool is required.

Wrap wire around screw.
At one time, was how almost all terminations were done. Rarely acceptable these days, except for short-term applications like practical wiring on a short-run show. Crimp terminals and ferrules are inexpensive and should be a staple of any theatre electrics shop.

Confusion over "shoe".
Some call Pressure Plates shoe terminals, others call the Ferrule-style shoe terminals. Best to avoid the term altogether and be more specific.

Strain Reliefs.
For 12/3 SOOW cable; for 12/3 SJO cable (as on Two-fers, Break-Ins, and Break-Outs); and for fixtures' Fiberglass Sleeving containing three 16g. wires.
Most connectors have some method for reducing the cable entrance hole if less than 12/3 cable is used. If these little plastic reducers are missing, I've found the 1" jacket scraps that remain from stripping the 12/3 are useful for enlarging the cable diameter, especially with the fiberglass sleeved conductors on modern fixtures. The use of multiple wraps of gaffers or electrical tape is not advised. Besides being a waste of tape, it tends to slide over time and becomes an ineffectual, sticky mess.

Locking
Various methods have been attempted over the years. From 1929 to 1957, Kliegl attempted to market a figure 8-shaped spring that went into a special slot on each connector. Never caught on as it was proprietary (how very Kliegl-like!) 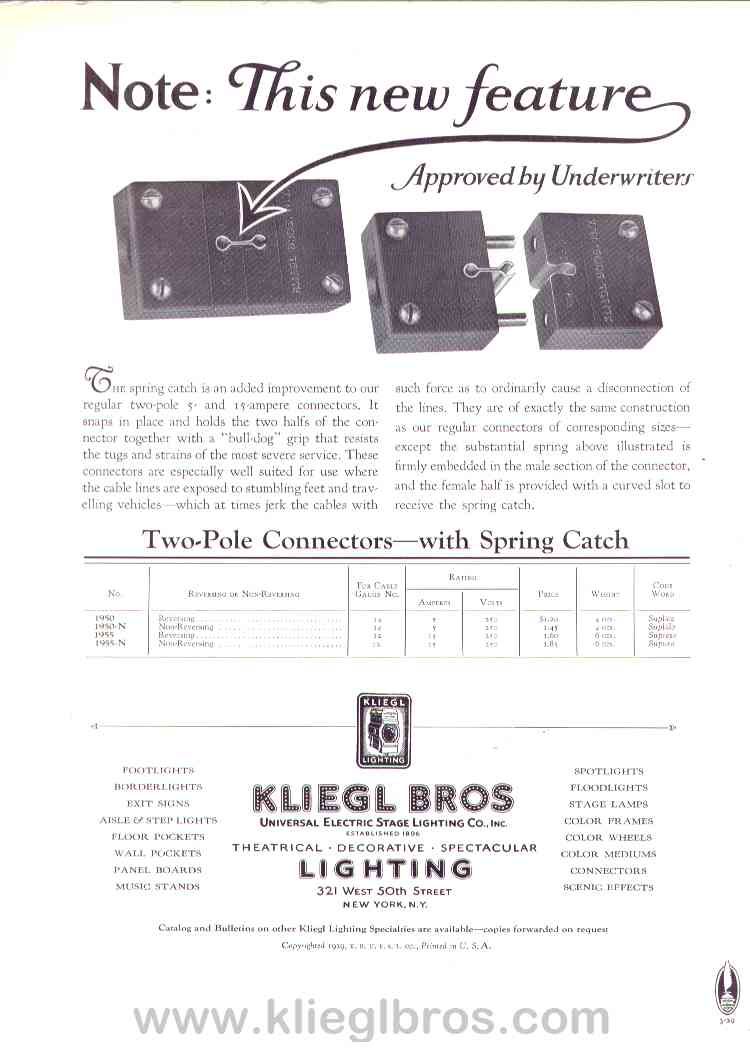 In the late 1970s/early 80s, Union Connector introduced the Harj-Lok, to compete with the Twist-Lock connector, which was gaining in popularity. 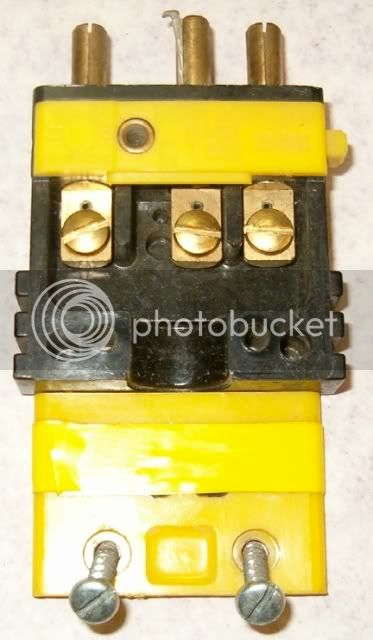 Notice the extra hooked piece on the center pin. Pressing the button on the right side of the connector recessed this hook, which fit into most, but unfortunately not all, female sockets. The locking tab was easily broken, rendering the locking feature useless. The connector didn't last long on the market, and one seldom sees a working one these days.

Some connectors, most notably the Bates and its clones, have a 3/16" hole in them, perfect to accept a length of 1/8" tieline or Ty-Rap to fasten the line and load connectors together, or for a drywall screw to affix to a wooden member on the back of a set piece.

Probably the most prudent method is to keep the pins split, either by using a knife, CAREFULLY: 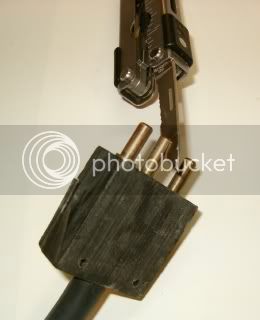 Or a special purpose tool known as a Pin Splitter, (a feature included as one of the many functions on the Ultimate Focus Tool): 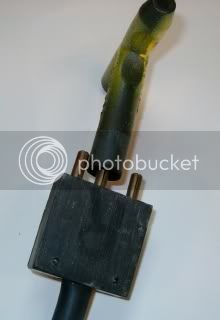 If the male is loose in the female, SPREAD THE PINS--it's why they're split. Taping a loose connection just leads to arc-ing and over-heating.


Interesting trivia:
I suspect this is the patent: US Patent number: 5810624 for what became the Trixfer - Developed by Theatrix.

In order to continue to make "V" style twofers, a special strain relief, designed to accept two cable, was required. TMB's ProPin is the only manufacturer to offer such a device. From ProPin.pdf:

All photographs not credited were taken by [user]derekleffew[/user], from his personal collection.

An automated review of this page attempts to determine its readability in English (US). The page contains roughly 1,629 words across 145 sentences.