Page
An obsolete type of dimmer that used a large variable resistor to dim the load. Since it could be used on DC as well as AC, these dimmers were in daily use on Broadway until 1977. Grease , closing in 1980, holds the distinction of being the last show on Broadway to use resistance dimmers.

In order to dim a load to zero, the load had to be with 20%of the rating of the dimmer. This necessitated the use of "ghost loads" on some circuits that were lightly loaded. These were old fixtures or heaters hung backstage, or on racks that could be rolled out into the alley during performances, weather permitting. A benefit in winter, a curse in summer.

Typical ratings of these dimmers were 2500-3000W and 5000-6000W. In the US, Century, Kliegl, and Major were the primary manufacturers, and permanent installations (often on the backside of the proscenium wall) became very customized with, almost literally, bells and whistles. 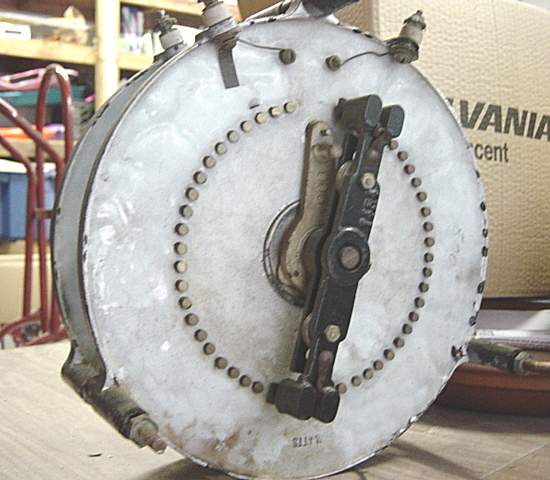 For Broadway and the touring market, resistance dimmers were packaged in metal-lined wooden crates, resembling that of an upright piano. Available in 14-plate x 3kW, or 12-plate x 6kW, "piano boards" with a locking shaft mechanical master. Interestingly, the setting scales were backwards: 10 was off (maximum resistance) and 0 was full (minimum resistance).

Resistance dimmers also came in 4 or 6-plate x 750W "preset boards". These sat on top of the piano boards and were fed from individual larger dimmers, thus allowing finer individual control of each light.

An operator typically had two piano boards and up to 6 preset boards. They could be specified with the master handle on either the right or the left, two allow one man to run two boards. A "six-board musical" (84 main dimmers) was about as big as one could go. Since the dimmers consumed full power even when set at zero, standing between two boards was like Dante's inferno.

All these dimmers had porcelain stage pocket outputs. A "plug" was a two-wire 50 amp stage plug (not a pin connector--and sometimes called a "paddle plug" or "opera plug"). A "connector" was the familiar pin connector, except with no center (ground) pin. A "cable" was a long adapter (50-150') with a male stage plug on one end and a female pin connector on the other. A "jumper" was a cable with a male and female pin connector. Most of the cable was cloth covered. There was asbestos (type AA) wire everywhere inside the piano board, and of course twofers were also made from type AA.

It was another world. Very few regret the extinction of resistance dimmers.

An automated review of this page attempts to determine its readability in English (US). The page contains roughly 428 words across 27 sentences.