Page
Traditionally, a row of striplight-type lights along the apron of the stage.

http://www.strandarchive.co.uk/lanterns/sunraydis.html
Called "floats" in the UK, one surmises from a time when they were simply a wick floating on oil. 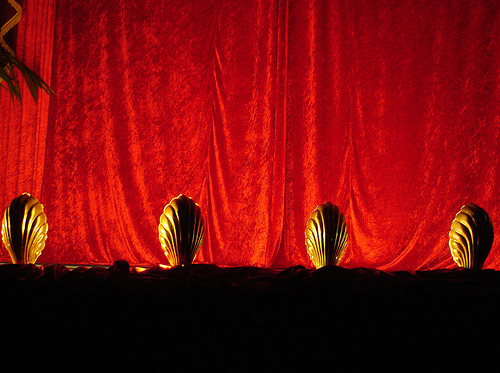 A reproduction for a period play.

As dimmer and instrument technology progressed, and it became more affordable and practical to use several individual spotlights (P/C, Fresnel or ERS) to illuminate a scene instead of using the "floodlight" that is a footlight, footlights fell out of favor. They were seen as old fashioned and unnecessary in the "modern" theatre. I would place the beginning of this trend around the 1960's. For the most part, they were right, footlights had outlived their place as a main and standard source of illumination. The effect it had on a performer was harsh, casting large shadows and making a performer look "flat".

However, footlights live on, why is this?

Well, first there is the "art imitating life" thing. Designers today may use footlights when they want that "feel" of turn-of-the-century lighting. Perhaps they are doing an older musical. I spoke with an acquaintance a while back who was tracking moving lights for the current Broadway production of Chorus Line when it was pre-Broadway. He said the designers goal was to recreate the lighting of the original production, hence in photos of the current production, you will see alot of footlights. It's a design choice and something the creative team must agree upon.

Many older theatres continue to use footlights as curtain warmers, and a few still use them as main a main illumination source. The Oriental here in Milwaukee does just that.

The real role of footlights today is as a supplimentary or "fill" light. The days are gone of universally installed RGB mixing footlights. Zip strips and Birdies are commonly used today as footlights. They're useful to selectively fill in under a hat, highlight an actor, create dramatic shadows, or even-out the lighting on a performer. Ever watch stand-up comedy or The Chappelle Show on Comedy Central? You'll notice they use ungelled zipstrips as footlights.

In summary, footlights are simply another tool in the lighting designers bag of tricks. Used properly and consciously, and not neccesarily sparingly, they are of great aid to any designer.

I'm sure the others will elaborate even more, but I hope this serves as a good basis for the evolution and modern roll of the footlight.
Click to expand...

A special derivation, "Cyc Footlights," sits on the deck just DS of the cyc or sometimes in a 2' deep cyc trough and is akin to a "electrics ground row".

An automated review of this page attempts to determine its readability in English (US). The page contains roughly 859 words across 60 sentences.