Page
Traditional method of producing snow on stage, most notoriously called for in Tchaikovsky's The Nutcracker. A rectangle of heavy muslin or 12 oz. canvas duck, 6' high and 3/4 of the width of the stage is sewn with jute webbing, grommets, and tielines along the long sides, which are the top and bottom. Starting 6" down from one webbing and 2' in from the short side, cut a slit 2' long every 2-3", parallel to the short side. Tie to two adjacent battens in a counterweight fly system. The batten nearest the slits is the "working" batten, the other is called the "fixed" batten. To load the cradle, the working batten is raised 3' above the fixed batten, and the shredded polyethylene flakes are distributed equally into the cradle. On cue, the working batten is lowered just enough so that the flakes fall out and then raised again. "Rocking" the working batten makes it snow. A gentle touch on the flyrail is required, as the working batten only travels 2' maximum, and overshooting in either direction may cause the entire cradle to dump!

Machines, such as this, or this, using liquid soap tend to produce more realistic snow, but if you're set on the traditional snow cradle, shredded polyethylene flakes can be had from Norcosto, Southern Importers, or just about any theatrical dealer, for about $5 per pound. Depending on the width of the cradle, it's unlikely you'll be dropping more than one pound per performance.


DO NOT re-use the snow!
​
The chances of contamination with foreign matter, and the difficulty in filtering make it just not worth the risk. Dropping a screw, nail, washer, or wood splinter into seven year-old Clara's eye WILL NOT make for good press for The Nutcracker or your venue.

Additional information at Theatre Effects. Pictures below courtesy of LimeLight Productions.
Note that the author prefers slits to holes. It can snow either upstage or downstage of the cradle, whichever is farther away from the nearest electric. 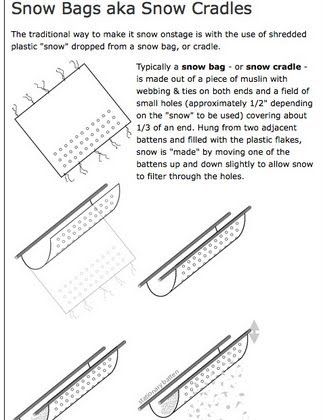 For smaller spaces, or those without a counterweight fly system, a snow drum can be used.

An automated review of this page attempts to determine its readability in English (US). The page contains roughly 339 words across 20 sentences.