I'm cleaning out my gel drawers and finding some un-identifiable color. So for you history buffs, help!

1.) I know that one is a Roscolux colored diffusion of the R120 range, but in Sky Blue, that's been discontinued. (the student who wanted 2 cuts, cut off the label!! I seem to recall R128?) Was this really a thing?

2.) Some similar Sky Blue frost, but more akin to Lee224: heavier frost, not coated-on-one-side. Similar to R64 or R67 in color, paler than L224. It was grease pencil labeled "G108" which is NOT GAMcolor or Gelatran, and probably meaningless.

Any old-timers remember any of this stuff?
Eric Stehl
Master Electrician
Weitzenhoffer Family College of Fine Arts
University of Oklahoma

You might be thinking of Roscolux 108, "Daylight Frost," which was a paler blue than R68 iirc (but -- I've never compared the photometric charts on these). Not sure when it was discontinued; there's a whole sequence of R107 - R110 that's now "missing." Also note that it's a different color than Rosco E-Colour 108, which is an analog to Lee 108, English Rose. There is a GAMColor 108, "1/8 Antique Rose," which is similar to the Lee color.

Lee also has a series of "cosmetic frosts," Lee 184 - Lee 192, which incorporate a fairly non-saturated / pastel color and diffusion, typically used in studio and portrait work rather than theater.

Who's the old-timer??? Got out the olde books.

JACKPOT SPOILER!!! In Jan '91 there are a bunch of silks including a different blue. Ha. See below.

Wait. What? There were more questions? I didn't see any help for the other ones.

...haven't looked at Brigham or Roscogel lately. Some nice stuff.

Hey Reidly!!
The Rosco 108 makes sense for the one labeled G108. It is a sky blue, and frosted thru, like R111.
However the other sheet is only frosted on one side of the sheet, not unlike the R121, but paler. I was wondering if there was a Sky Blue Frost at R128 next to the Sky Blue Silk at 129.

Who knew that I would regret not keeping all my old gel books!! (Though I do still have my 1982 RoscoLene book from college! and a Cinemoid book bound with string. )

Here they are, sitting on my 1981 first edition Warfel text. 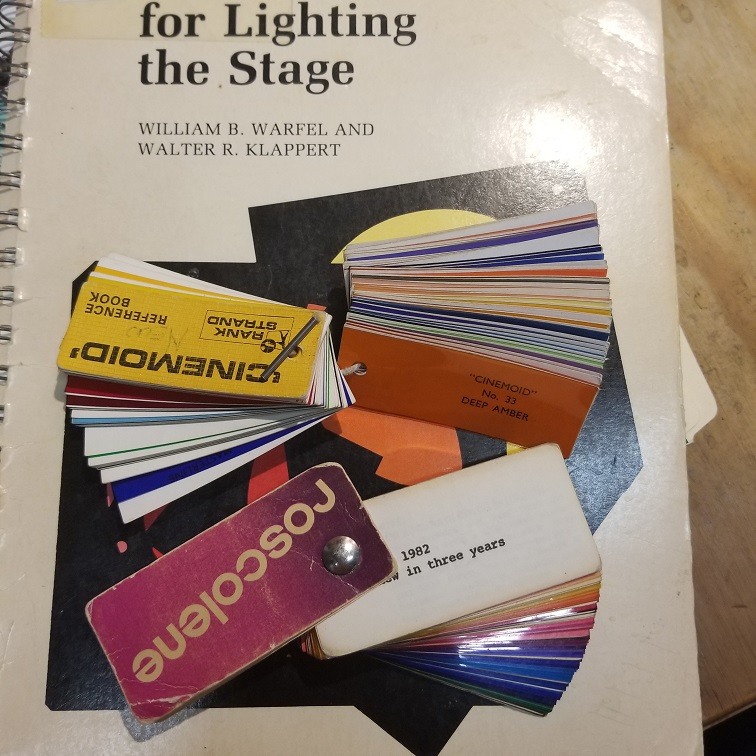 I like that somebody had written 'new' on the Cinemoid book.
Eric Stehl
Master Electrician
Weitzenhoffer Family College of Fine Arts
University of Oklahoma

Well, I may not have kept the swatchbooks, but I found a photo of the gel showing the label. It's not R128.
The winner is
Roscolux 152.
Eric Stehl
Master Electrician
Weitzenhoffer Family College of Fine Arts
University of Oklahoma
You must log in or register to reply here.