ACTION ALERT: Light your building up RED for RedAlertRESTART on Sept. 1st from 9pm-Midnight

UPDATE: The date has been moved to Tuesday, September 1st

This is a call for all Venues and people in the Live Entertainment Industry to help us push for support for the RESTART Act. The goal is to light up as many buildings, venues, and even your homes RED on Thursday evening, from 9pm to Midnight. We are lighting up buildings as close to Rosco R27 Medium Red, or Apollo AP-8350 Bludgeon Red as we can. Both Apollo and Rosco have created gobos for this event! The goal is to get 1500 buildings lit up next Thursday.

So, you want to participate? Here's what you can do:

Together, we can make our voices heard and SEEN. Let's show the industry that ControlBooth members can mobilize into action. Whatever it takes, let's light it up RED.
Last edited: Aug 21, 2020

If you live in the DC area, PM me. I can get you with the group that is working to get as much of DC lit up as we can. We need all the help we can get!

UPDATE! Due to numerous conflicts, not the least of which is that it's the night of the Republican convention, the RedAlertRESTART night has been moved to Tuesday, Sept 1st! That gives us more time to prepare, contact partners, and make this even bigger.

I can light up my house.

Will be lighting up our theatre!
A

This was quite effective when we did it in the UK - I had a couple of guys in the street remark how dramatic the theatre looked while I was taking a snap, and when I explained what it was about they were very supportive. 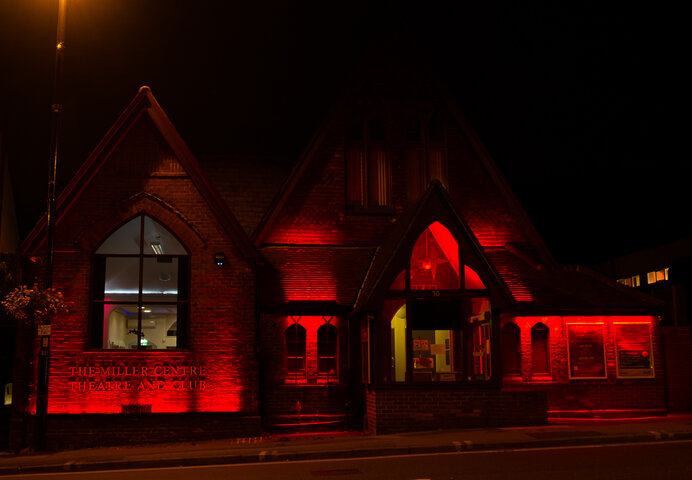 Weather permitting. If the weather sucks I may have to photoshop an existing night image. I wish the links for WeMakeEventsNorthAmerica were a little more inclusive of the other 2 countries that make up the continent though.

So, in another group I'm in, some ideas have been thrown around.

If you know a venue or DJ that LiveStreams, maybe they could livestream 9/1 from 9p to midnight silent with just the logo and hashtag (#WeMakeEvents)

Gelling your ghostlight red from all of the area theaters. This could be done at any time and photos sent and posted the day of.

LLDeen said:
Will be lighting up our theatre!
Click to expand...

Hey LLDeen, what theatre you at?

dvsDave said:
Hey LLDeen, what theatre you at?
Click to expand...

The Lerner Theatre in Elkhart, Indiana

I'll red out my stage and get a picture to post. We were in the process of buying uplights for our atrium windows that would have been perfect for this, but then Covid froze our spending, I'll just have to settle for a stage pic.
F

I appreciate the idea of doing something, but Congress is grid locked and the President isn't interested in brokering a deal. One of the parties suddenly cares more about defecits than about 50 million jobs, but seeing a theater bathed in red light will make all the difference.

FMEng said:
I appreciate the idea of doing something, but Congress is grid locked and the President isn't interested in brokering a deal. One of the parties suddenly cares more about defecits than about 50 million jobs, but seeing a theater bathed in red light will make all the difference.
Click to expand...

All we can do is to try to make our voices heard and seen. Our industry is really behind the curve when it comes to representation in DC. We have to make Congress notice us and see how much money we bring to the economy every year. It takes advocacy and big visual acts to do this. We should know, other industries call upon ours to help them do the same thing! DC is getting lit up in Gold and Purple for Woman's Sufferage next week, and our industry is the one to pull that off. We just need to represent ourselves now.

@almorton did you see any government support after the event, or any updates on potential support?

The theatre in the pic looks nice. I was thinking about just rolling a couple small followspots out front, not as artistic. It would be the latest thing I have lit in a while.

Mac Hosehead said:
The theatre in the pic looks nice.
Click to expand...

If you mean the Miller Centre Theatre in my link, thank you - that was lit with LEDj 1 metre long IP rated LED strips. They're in place permanently, two on the roof, four under the main window, two that you can't see around the far side, two over the posters, one over the doorway and one uplighting the lobby. They're controlled from an old Strand 301 into which we've recorded scenes. Normally the theatre is lit at night in a low level magenta, with the posters lit in medium white. On nights when there is a show on, the lobby and door light are turned to white and the magenta and white intensity is increased. Currently it's all lit in blue, the "thank you" colour for our health service and carers.

Hi Keith, sorry I posted this before I got an email from Mary, I'll update the original post! ProAdv (my day job), we just put a page specifically for RedAlertRESTART resources: https://proadv.com/RedAlertRESTART

FMEng said:
I appreciate the idea of doing something, but Congress is grid locked and the President isn't interested in brokering a deal. One of the parties suddenly cares more about defecits than about 50 million jobs, but seeing a theater bathed in red light will make all the difference.
Click to expand...

This is sort of a chicken/egg problem. Your point is reasonable — that a theatre lit up red will do nothing — but I counter that politicians don’t care about things they don’t know about and don’t feel threatened by. The awareness that can be raised by lighting *many* theatres, prop shops, factories, production facilities, sound stages, everything, in red at the same time, across the country, has a chance of getting people’s attention.

America’s largest export, as a sector, is “culture” — comprised largely of movies, television, and music. “The Apprentice” was syndicated internationally; Trump is part of this huge sector. For all the raving about this president being all about the economy, he has ignored one of the biggest pieces of America’s economic portfolio. How did this happen? He can’t claim he’s not aware of it. Perhaps he just needs a loud wake-up call.

We will be lighting up RC4 Wireless in red. Perhaps we will Facebook Live our empty made-in-America manufacturing facility, flooded in red. #redalert

Overture Center for the Arts in Madison, WI will be participating: Overture Center for the Arts

Overture Center for the Arts is a stunning architectural landmark in the heart of Madison’s thriving cultural arts district. In addition to housing ten resident organizations and presenting more than 200 performances, art exhibitions, and educational and community events each year, Overture...
www.overture.org

Its looking like we're at 3 or 4 venues in Toledo that will be doing it, we'll be red as well as the convention center and arena.
You must log in or register to reply here.