ok so i was speaking with one of the guys that works for the company that provides all the sound gear for the Australian Grand Prix and he told me a few things, here are the intresting ones 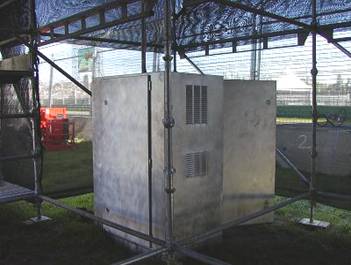 and they have 3 phase power running to them, and if that fails each has a ups and battery, for audio connections they have an eight core fiberoptic cable running to each amp hut for full reduncy, this allows the operator to monitor data flow (where the audio is going) rack temp (general temp of hut) and also individual amp temp all carried by one cable. if this link goes down the system switches to a xlr feed it has within 2 seconds of a fiber drop.

this is a very expensive system but if it fails every minute it's off the company loses 10 grand on hire fees.

scary stuff but there you go something intresting that you didn't already know.
Alex Hughes
Lighting Programmer
ConsoleTraining.com

Hughesie89 said:
this is a very expensive system but if it fails every minute it's off the company loses 10 grand on hire fees
Click to expand...

When that much is on the line, you generally will go alot further to create redundant networks.
Steve // Squeek Lights
LD // Programmer // Console Trainer // Moving Light & Repair Tech // Tinkerer
Nothing is ever "state of the art"...something new comes out the next day.
"Don't ever grow up. It's over-rated."
D

here is one of their speakers at the event, this is what i mean by providing the audio, whether the company you are speaking about we hired amps off is another story, because i know that all the amps for the horn speakers is still in those metal cases and it's a full rig.

Fight Leukemia
Dude, those are wuss horns.
These are the standard at all sort of sport facilities and newer race tracks in this part of the U.S.
http://www.community.chester.pa.us/main/index.php?option=articles&task=viewarticle&sid=24
Philip LaDue
Staging Supervisor at NYC Mobile Stage.com
Entertainment Freight Broker

yeah but that picture doesn't do them justice there about 50cm long and can JUST DROWN out a f1 car
Alex Hughes
Lighting Programmer
ConsoleTraining.com
L

Hey, if anybody out there can direct the NHRA (National Hot Rod Association) on how to get these speakers, that'd be great. Pomona Raceway's PA is for shite, although it does have to be heard over motors that are making 8000hp each, with no mufflers or noise damping. Headers only, baby!!!

And the great thing about F1 is, no matter where you go in the world, you can watch it on TV.
The opinions expressed by "What Rigger?" do not in any way reflect those of his employers, or any of their related entities. You must perform due diligence for all of your actions. YOU are ultimately responsible for your own safety.
M

Aside from a PA system, what other sound needs does a sports arena need? A commentators system, someone singing the national anthem, a sort of clear comm for the teams to the "head office" or wherever, and vice versa. What else would they set up?

loki said:
Know anyone actualy working on it?
Click to expand...

yeah a know most of the crew and next year, it might be me


there provide some of the corporate marquee's with audio also as you said commentators and also they use UHF radios for most of the event staff
Alex Hughes
Lighting Programmer
ConsoleTraining.com

miriam said:
Aside from a PA system, what other sound needs does a sports arena need? A commentators system, someone singing the national anthem, a sort of clear comm for the teams to the "head office" or wherever, and vice versa. What else would they set up?
Click to expand...

An arena differs significantly from something like a Grand Prix circuit. For one thing, most arenas are used for multiple purposes. While it may be football on some Sundays, it could also be hosting a monster truck event or a dirt bike race or a convention or a large meeting or a flea market or an ice show or a concert or any one of a variety of events on other days. So the sound system also has to be fairly flexible and multipurpose.

You will also find that the days of simple voice-only PA systems is long gone, most arena systems now have to be able to reproduce full range music at very high levels. From pre-game music to getting the crowd going during the game, the systems are expected to add to, or even lead, the energy.

With modern arenas you also have to address sound and video for concourses, private boxes and VIP areas. And then you get into all the back-of-house, broadcast, video replay and team communications systems, which can be very extensive and complex.

Finally, most arenas also incorporate meeting rooms, conference rooms, training areas and so on that also have some audio component. Sometimes all of these even tie together in some form.
Brad Weber
audio, audiovisual and acoustical consultant
www.museav.com
D

I stand corrected the arena PA system was a BSS Cobra 8810 running Crown XTi amps over HiQ network with fibre optics. Cobra is a somewhat rare control and has been replaced by the soundweb london but is still used and has proved to work really well for the grandprix. I know 2 of the system engineers from the company in question, but dont want to name them here for a number of sensitive reasons.
Jeremy West
Theatre Technician / LD
Supervising Venue Technician

so yeah i know it was done with either soundweb or IQ
Alex Hughes
Lighting Programmer
ConsoleTraining.com

I don't see why you would need 8 core fibre. That would be 4 pair and I don't see why they would need 1024 audio channels, Ok well 768 plus a pair for data, unless they have some horribly inefficient form of interface to the fibre...

Unless of course there is more than just the data + audio down those fibres, Comms might be taking up another pair, heck I've seen an entirely separate piece of milspec fibre run for comms.

I'm a little surprised that they are using Crown amps. I know that the I Tech series have a bit of a reputation for not coping too well with high temp, but the XTis might be better and I guess the air con covers most bases anyway.

If you think that this system has redundancy, you haven't looked at the setup for your average olympic ceremony of late... Athens I believe ran full Optocore in the normal redundant loop configuration as well as copper backups for everything. FOH had an identical backup, Mons had an identical backup etc. They had two sets of RF receivers etc etc.

The other thing with the Grand Prix is that it the system may have also had to pull double duty as a evac type system, which would make battery backups absolutely mandatory as well as all the redundancy...

I suspect you would find the Motorolas were tied into a wired comms system as well, quite feasible that every PA node had a Motorola base station or two or more depending on the number of channels in use in various parts of the area...

i know all the comms were tied in together
and they do have battries in each hut for backup
Alex Hughes
Lighting Programmer
ConsoleTraining.com

CB Mods
Departed Member
As there apparently may be some confusion, perhaps some clarifications are warranted. BSS and Crown are both part of the Harman International family along with AKG, dbx, JBL Professional, Lexicon, Soundcraft and Studer. HiQ is the Harman version of the control, communications and monitoring network originally developed as the Crown IQ network. So using BSS processing and Crown amplifiers allows for a more integrated device communications, control and monitoring environment. In these types of applications, being able to remotely monitor the processing and amps may be an important factor.

For many years Crown amplifiers were well known for their reliability and ability to operate under extreme conditions. The Crown CT, D, DC, MA and MT series had well deserved reputations in this regard. Several of these could handle dead shorts on their outputs while I believe it was the DC-300 that was actually used for underwater welding. It is sad to see that many of the newer models seem to have moved away from this heritage.

The BSS PS-8810, which basically was originally the Crown USM-810, is still in production and has not been replaced. The Soundweb London products are quite different than the PS-8810 in many ways including that the BLU-80 processor and BLU-32 Expander are CobraNet devices.
Brad Weber
audio, audiovisual and acoustical consultant
www.museav.com

CB Mods
Premium Member
Departed Member
I slightly miswrote that stuff on the Crown amps... The amps are no problem; shame the DSP has a spack attack and shuts down when hot. But without the DSP working, you ain't got much audio coming through...

yeah, well most amps also have thermal shutdown switches and the huts do have airconditioning in them
Alex Hughes
Lighting Programmer
ConsoleTraining.com
You must log in or register to reply here.