gafftapegreenia said:
Of course I do, I'm a reliable thespian packrat. In addition to my "baby" PC, I also found another light at an antique store in St. Clair Shores last summer!

My original thread is here:

Well friends, I found another one! This one was in an antique store for $45. The tag claimed it came out of a local catholic school.

So, what drew you here to the G Craig story, @LowStress ?
Click to expand...

Hit me up if you ever sell. Thx

A reliable thespian packrack? At least I have good company.
R

Mac Hosehead said:
A reliable thespian packrack? At least I have good company.
Click to expand...

Is a packrack a torture device for pack rats?
No, NO; that would be a Rat Rack (Silly me).
Toodleoo!
Ron Hebbard 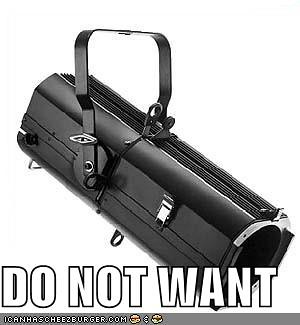 Ah' come on, was certainly not as bad as the Colortran Mini Ellipse or Altman Micro Ellipse. No geen lenses, and mechanical operations fine. Not too bad in getting a 1Kw rating, and for sales looking modern.

Certainly not as bad as this Century Leko re-branded as Major - literally with a metal sticker over the Century label. It with a step lens and iris but no shutters. 1Kw rated with it's 12" body stepped down to 8" step lens.

The Altman 1KAL series perhaps fell into function follows shape concept of going fluited aluminum/modern for the day. Would run cooler and allow for higher wattage lamps. Efficiency of the fixture I think medium overall. Not as bad as some, but dated in modern pre-LED technology.

Would you take a 1KAL series Leko over a radial 360 series Leko? That is a good design question for what paint brush to put where. This I do not know. This in use, the show designer has to use experience and leg work to figure out primary or secondary Leko for... above with the Color Tran Mini Ellipse which were clearly second line fixtures.