With concern for the health and safety of our exhibitors, attendees, partners and staff, the show management of InfoComm and the executive leadership of AVIXA™ have chosen to cancel the InfoComm 2020 show scheduled for June 13‑19 in Las Vegas, Nevada. We are currently considering new options to bring to life the engaging and educational experiences of the show in a number of different ways.

A show like InfoComm begins months before the first crate arrives with attendees arranging calendars, booking flights, and setting meetings. It begins with exhibitors launching marketing campaigns, committing to venues for events, designing their booths and coordinating dozens if not hundreds of staff calendars. It also begins with our speakers and instructors spending countless hours honing their content and rehearsing. However, we were forced to make the painful choice to take away this gathering opportunity and return time, money and effort to our community, to be spent on sustaining each other through this trial, and to position all of the industry for recovery and resurgence.

We look forward to working with you over the coming months as the world responds to and then recovers from this crisis. And we most sincerely look forward to seeing you at InfoComm 2021 in Orlando.

To find more detailed information about the cancellation of InfoComm 2020, please read the FAQs
Click to expand...

Ya beat me to it!
Too bad, but not unexpected

Do you have any clue the logistics that go into planning a 45,000 attendee event with 1000 exhibitors? You can’t just “postpone” and hope the stars align that the property is available, all vendors are available, all sponsors (and talent) can attend, hotels have full buy-outs available, etc.

InfoComm is like a two week buildout (maybe longer??). Finding a three week window of availability at the LVCC will be essentially impossible.

Considering the circumstances, I would be surprised if exhibitors are charged for expenses. AVIXA is going to have to prove their expenses and how the pro-rata share was calculated. Managing the PR to 1000 exhibitors likely isn’t worth it when AVIXA’s show insurance should cover most of the costs.

reviewcart said:
Do you have any clue the logistics that go into planning a 45,000 attendee event with 1000 exhibitors? You can’t just “postpone” and hope the stars align that the property is available, all vendors are available, all sponsors (and talent) can attend, hotels have full buy-outs available, etc.

InfoComm is like a two week buildout (maybe longer??). Finding a three week window of availability at the LVCC will be essentially impossible.

Considering the circumstances, I would be surprised if exhibitors are charged for expenses. AVIXA is going to have to prove their expenses and how the pro-rata share was calculated. Managing the PR to 1000 exhibitors likely isn’t worth it when AVIXA’s show insurance should cover most of the costs.
Click to expand...

If nobody goes to the hospital or morgue because of this cancellation, all the "headaches" will be worth it. The Sturgis Rally is happening now, that's bad enough.
P

What Rigger? said:
If nobody goes to the hospital or morgue because of this cancellation, all the "headaches" will be worth it. The Sturgis Rally is happening now, that's bad enough.
Click to expand...

There has been a total of 1 Covid death attributed to Sturgis. An event attended by 460,000 people. In 2018 there were EIGHT traffic deaths at Sturgis. Stop spreading fear.

ppas11hum said:
There has been a total of 1 Covid death attributed to Sturgis. An event attended by 460,000 people. In 2018 there were EIGHT traffic deaths at Sturgis. Stop spreading fear.
Click to expand...

...so far. The contact tracing has so far put at least 100 cases directly to the event covering over eight states. One study suggests that there could be over 250,000 that will be traced back to Sturgis. Personally, I believe that they won’t be able as many who spread it won't be responding to contact tracers.

(Preemptive apology -- I went down an economic rabbit hole here.)

The media shouldn't have run the Sturgis study until it completed the peer review process. While there will certainly be lots of cases and a number of deaths that result from that event, the extraordinary claim of 263,000 cases and a $12.2Bn public health burden lacks supporting extraordinary evidence. The math and assumptions they're using is fuzzy. It's also a study prepared by economists that should've had more research done in tandem with epidemiologists before going to publish.

Now if the study was predicting that it would be 263,000 cases that were cascaded through multiple people who spread it, showing an impact over the next several months -- that might be more believable. But the claim is that those are 263,000 cases that have already been tallied. That seems improbable, especially as most people who contracted it will be asymptomatic and will not have gotten tested.

It's way too early to understand the death toll in particular. The event wrapped not quite 4 weeks ago. It takes 3 weeks from an event like that to see a bump in cases from the first 1-2 rounds of people going through incubation cycles. People who ultimately end up dying take 1-2 weeks to develop symptoms, 2-6 weeks to pass, and another 1-2 weeks for their death certificate to be processed and tallied. So you're looking at around 2 more months before most of the deaths will happen from people who directly attended the event will be counted, and another month or so for people those attendees infected to pass.

For anyone who's bored, here are the relevant studies:

The Contagion Externality of a Superspreading Event: The Sturgis Motorcycle Rally and COVID-19
The Forgotten Numbers: A Closer Look at COVID-19 Non Fatal Valuations (study that arrived at the $46,000 cost approximation per non-fatal COVID case -- by the way, this number reflects statistical cost value of injuries sustained similar to how insurance companies judge how much money you should get if your arm is amputated. Likely under-represents the total economic cost of the pandemic.)

For the time being, I'd probably focus more on the $46,000 per non-fatal case. If you host an event that produces 10 cases, the direct cost may be $1500 for those people to get tested, but the overall cost diffused across all cases by the time this is over including the people those individuals might additionally infect is closer to $460,000 for your event. Risks of illness and dying aside, you have to ask is my event worth it?

The answer for many people will be micro --> "I don't give a $#@# I can't be responsible for the larger economic burden of this pandemic." But, that doesn't change the fact that on a macro scale, more cases = more costs, and if you look at Kniesner's methodology, their approach is very conservative at estimating cost per case given the CBO is projecting a $7.9T economic impact to GDP over the next 10 years.

(General disclaimer before people start to argue about the relevancy to a specific event -- obviously, tying costs per case is talking about climate more than weather...the forest rather than individual trees...not relevant to any typical individual event but would be a more accurate representation of the impact averaged across 10,000 events)
P

The bottom line is that 460,000 people (a lot of people!!!) attended Sturgis over a month ago and the Covid rates in all the nearby States are pretty low. I would imagine most people drive to a motorcycle rally and are from nearby states. And let’s face it...these people at Sturgis aren’t adhering to the mask and social distancing rules too ardently. HAHA.

So we should be very happy! Especially the people in our industry, who rely on live events. We are not very far away from live events coming back in a big way. 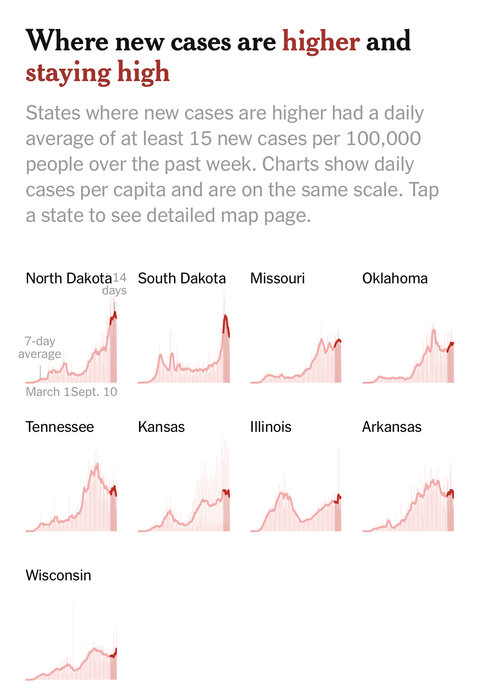 There's nothing fundamentally different about the virus now than when people started letting their guard down at 4th of July or when they ignored it earlier on in March/April. The reason states such as my own here in Florida have trended down is because people finally started taking it seriously and more private businesses took it upon themselves to enforce mask requirements. Doing a 180 and opening up festivals and theaters and clubs and arenas would undo that progress in a heartbeat if it's not done responsibly.

Most areas where live events are held are not the rural Midwest where people generally have less contact with each other to begin with and spend less time (no time) on mass transit. If you think Miami and New York and Chicago and Los Angeles are going to have bustling events happening anytime soon without repercussions, you're sorely mistaken. Human behavior aside, we're also a couple months away from flu season restarting and if aren't in good shape before that hits we'll be in trouble when it ramps up. Also a contributing factor to the virus not being worse right now is that many people are outdoors. Come October when people are spending more time indoors in closer quarters, that also contributes to making things worse.

Also should note that a number of the universities that have tried to open have failed miserably. I've been following UW-Madison and it's a total cluster. They've locked down 2 dorms for quarantine because they can't just send everybody home and disperse the virus into those students' households. Campus dining is now carryout only and they're delivering food to the locked down dorms because those people can't go out. Students have been on campus for less than 2 weeks and now the state of WI is at the highest peak of cases they've had all year.

If you're saying we should throw 20,000 people in arenas a few nights a week for sporting and concert events, you might as well be thumb-tightening fixtures to trusses, leaving safeties off of everything, and letting the new guys run the motors because statistically, the consequences are very similar if you drop a truss or a speaker cluster on a group of people. Some will end up in the hospital, a few will die, most will see what happens in person or watch it on the news and decide to stay away for the foreseeable future -- which leaves producers with large overhead and little revenue, who will go bankrupt if they keep hosting events but can't get butts in seats.

You can look South Dakota's increase from 10 cases per 100k population up to 35 as not a lot, but that's a 350% increase in 6 weeks, largely from a single event. Virus transmission is statistically relative and its growth is exponential, so iIt's not going to be +25 cases/100k if you try that in Chicago or New York City. A three-fold increase every 6 weeks in cases in New York, sustained over a 2-3 month period would put us at some high death tolls. Thankfully, New Yorkers are taking this more seriously relative to other states, so in all probability you end up with unprofitable shows where not a lot of people attend and maybe the three-fold increase takes place over 12 weeks instead of 6, and within a few months the producers are filing for bankruptcy.

All of this is to say that there's no evidence a return to pre-COVID live events is viable right now or just around the corner. At best you can say things aren't as bad right now as they were at the worst of the pandemic, but we can still make that happen if we don't take precautions.

In other news, NAB has moved their 2021 conference preemptively to October. I think its a smart move. Give the country more than a year to get our act together. 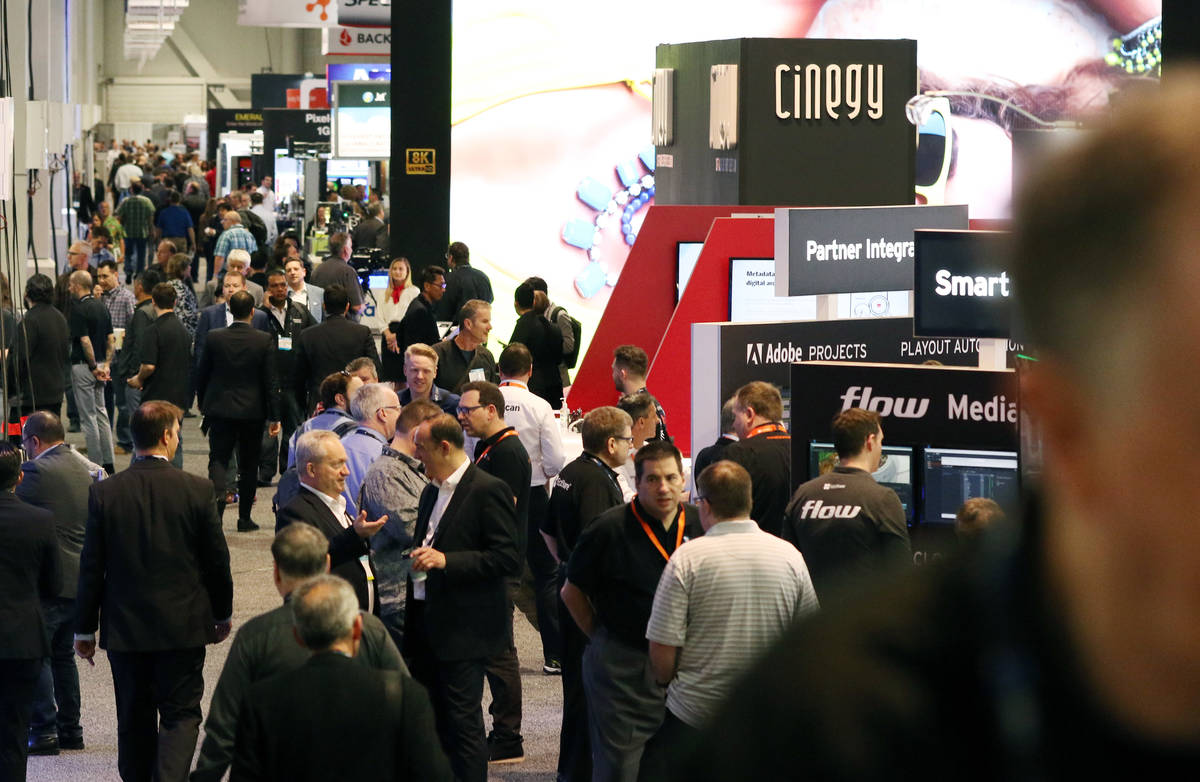 Canceled for this year by the virus, one of the five largest annual Las Vegas conventions has been rescheduled for fall 2021 instead of its usual spring timing.