So my high school is currently building the set for our second musical, Beauty & the Beast. Part of the set includes a tower -ish structure with two large doors which houses the library. So the doors get opened and you see all the books but in the middle of the wall betwixt the books is an oval shaped window.

Well, in this window our TD, Carpenter, Producer, and Director have demanded a stained glass window with a rose design on it. The other day, our TD approached me and asked if I would do it, also assigning another technician to the project.

Our budget is pretty low and most of it we've already spent on lumber for building the Beauty & the Beast set since we didn't strike Little Shop of Horrors. If anyone has suggestions on how to make a stained glass window, or make something look like one, they would be much appreciated.

I know of two ways.

Both require that you have a piece of lexan or other clear plastic sheeting the size of your window.

The other way is to just use gel, cut in the colors and shapes you need, and then taped down with black E-tape. My mom did this method years ago for some huge stained glass crosses for church.

We did this with 4 squares built in to a set piece, and actually shined light through them with awesome effects.

You can do this with Muslin too. Instead of painting it, you starch it with hot starch to size the drop. Then to color the design you use dyes. The combination will leave you with a drop that you can see light through. For the leaded parts and the frame you use paint. The paint will be opaque but the dyed part translucent.

Also do some window cling research. There are getting to be more giant window clings available in fake stained glass. My local Home depot caries a couple of options.

gafftapegreenia said:
The other way is to just use gel, cut in the colors and shapes you need, and then taped down with black E-tape. My mom did this method years ago for some huge stained glass crosses for church.
Click to expand...

This is a great method, and falls well within the budget you've mentioned, ReiRei. If you are looking for bits of off-color gel to use, I may be able to assist you from scraps in our demo room. 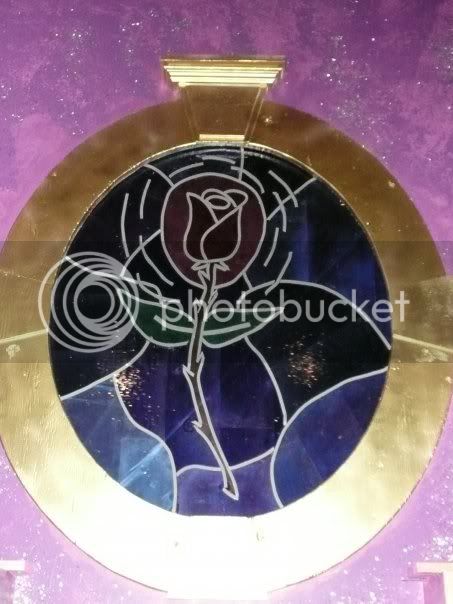 Right before strike & load out. See, I fixed the foam! Woo! 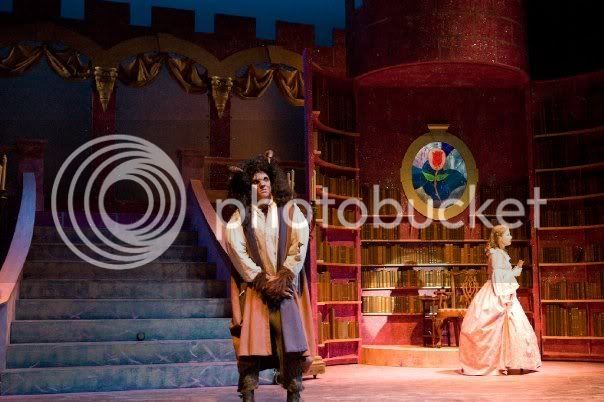 During the show.​
Okiedokie. So just that window took me about ten hours to finish, not including the time that I put in looking through our scrap box of gels. First my dear partner drew out the design, put it onto a transparency sheet and we put the plexiglass against the wall and traced it on. However, I had to go over it with a black marker because she used a pink one that I couldn't see through the gel... whoopee.

First I used some spray mount adhesive and put the gel down, cutting around the lines. I think that worked out pretty well but there are a few spots where you can see light shining through cracks in the gels.

After all the gels were glued down... which was a little scary at first because 4 hours into it the light blue gel in the upperhand right corner of the faux window started melting... that was lovely. I almost wanted to kill myself because I thought that I was going to have to pull up the gels...

Anyways, after I glued down all the gels, I used an adhesive foam tape over the lines lines we drew onto the plexiglass. Now in the first picture you can see how the foam tape was screaming at me and not staying where I told it to and I didn't notice until right before our opening show so I took a ladder into the library and sprayed some spray-on adhesive to that sucker and was like BAM! WHAT NOW?! Needless to say that it stayed after that...

I am a little sad though, my drama teacher sold our set to Bend High School so I'm just going to have to go up to Bend on the closing night of their show and be like, "I really want my window back... in fact... if you don't give it to me... I'm holding your theatre hostage... or I'll simply leave a chupacabra in here..."

Wow, that really turned out nice. However, I think your epic retelling of the story was most entertaining.

I hope you took pictures during the design/construction, as this is perfect for a portfolio.
Last edited: Apr 17, 2008

People up north don't believe in chupacabra...you're in Oregon...you'll leave a Sasquatch.

Excellent job on the window.

Fabulous window. I love it.

I likewise could wish to see a gel in the followspot and I actually don't like hard edge spots in this situation, that's a personal choice though.

Well if we're all going to critique the lighting I'd like to mention that I despise spots from that angle with or without a frost of some sorts.

But that's just me.

And for a HS production? Well let me just put it this way....I've seen shows created heads of graduate programs that didn't look that good...
R

Most of the time there was a color in for Belle, it was R51 I think. But we got this brand new light designer who I really didn't like. I didn't really like the hard edges either but I learned to deal with it. *makes ick face* It was really tough for my other spot op. to spot Mrs. Potts when she was singing that tale as old as time deal because we have really unstable spotlights.

Wow, that really turned out nice. However, I think your epic retelling of the story was most entertaining.
Click to expand...

I actually missed an epic part in which I had brought an unopened box of cheese-its with me... about five hours into making the window, at about 4 in the afternoon I was like, "hey... I'm kinda hungry" so I leave the theatre and I'm in between our Black Box and the theatre where I had left my box of cheese-its in a very clever place. I go to pick up the box... and the box is empty... no plastic bag or anything... it reminded me of a prop.

Anyways, none of the actors knew where my cheese-its had disappeared to and so I brushed it off thinking that I'd be out in about an hour or so anyways and I walked into the Black Box to get the SM keys from my SM and I see one of the ASM's who is very rude and obnoxious with an almost empty bag of cheese-its. (insert surprise here)

So after rehearsal was over, I kinda let her have it. Because it was kind of uncalled for for her to take my food without asking me and then eat all of it. I epic'd all over that theatre that day. I actually almost considered eating the window though... really... I was that hungry...

People up north don't believe in chupacabra...you're in Oregon...you'll leave a Sasquatch.
Click to expand...

It's actually a theatre joke... one of my friends is always talking aout turning into the chupacabra during the full moon and letting little chupacabras out onto the stage... it's really funny when he gets going...

And I haven't heard about the sasquatch in years to tell you the truth...

I'm not too scared though... if there were-chupacabra were indeed our head sound tech... I think the worst he would do is steal my c-wrench or something...
M

ReiRei said:
I'm not too scared though... if there were-chupacabra were indeed our head sound tech... I think the worst he would do is steal my c-wrench or something...
Click to expand...

A sound tech pick up a wrench?! Never happen.

You know why sound guys only count to 2 during mic checks? Because if they get to 3 they might have to pick up something.