Well I've had some time to recover and it's time to put together my show report.

LDI was a great time as always. Seeing all the latest gear in person and hanging out with my CB friends is always a great time! The show seemed bigger this year than last. It seems to be slowly growing it's way back up to the size it was when I first went about 8 years ago. If you haven't gone before, you really need to go next time. LDI 2016 will be October 21-23, put it on your calendar and start begging you boss to let you go now!

About three years ago CB went from being the website we had to explain to everyone to being something everyone knows about. These days when I walk the floor I hear, "Are you really Gafftaper!... I love CB you guys have helped me out so much!" That's such a great feeling. Just yesterday I got an email from one of the vendors who scanned my badge, and then took the time to send me a personal message saying, "I wanted to send a quick note to say thank you for stopping by the booth at LDI and checking out our stuff. Control Booth has definitely saved me quite a few times in the past, and your posts have been really helpful!" CB is growing and making a huge impact in the industry and all of you are the reason for that.

Well, I've talked a lot about the PRG ground control, if somehow you missed that discussion, go watch that video. It's way to expensive right now, but I really look forward to the future. I hope someone will scaled down and mass produce it making it something we can all afford. I would LOVE to have two virtual follow spots hanging on the first electric in my theater.

The second product I was really impressed with was the Avolites Titan family. Our friend Jim "on lights" Hutchinson is now with Avolites. He spent a lot of time shooting a great demo for us of the entire family. Unfortunately, despite hours of dvsDave trying to edit the video, the light show in their booth made it unwatchable. We'll have to see if we can find a good demo from Jim to post later. Here's the deal. For $250 you get a dongle with one universe and the entire Titan software program. For a couple grand you can upgrade that by adding a fader wing. You can work your way up through a product line of boards from a few thousand to 30 thousand that get bigger and offer more handles, better encoders, and touch screens. But the software is ALL THE SAME. There are options like the Tiger Touch console which is pretty reasonably priced, and later as your needs grow you can add a Tiger Touch wing (i think maybe two). Every console has the same software. The only difference is more universes and more convenient control surfaces for your application. That's a fantastic budget friendly approach to a product line! But wait until you see what the Titan software itself can do, it'll blow your mind. My love of the Horizon software system is well documented here going back a really long time. Titan is like Horizon on steroids. It's easy, it's logical, it does all the hard work for you. It's pixel mapping capabilities are insane. With a few minutes of training my kids could program a pixel mapped show in minutes. Then you get into it's insanely powerful and easy to use effects engine. Everything is simple, logical, and really fast. You can program in seconds what would take minutes on another console. It's hard to explain, you really need to see a demo of the software for yourself. I'm so disappointed the video didn't work out. But we'll work on getting something to replace it.

I've got a lot more to say but I'm running out of time before I need to get to work. So I'll post more later. I'll leave you with a picture of the CB meet up at the Apollo Booth. There were others who stopped by, but this is who made it into the picture. Thanks to JChenault we did have inflatable furniture. Back Row Left to Right we have: Ruinexplorer, GreyWyvern, Milad Khouli from Apollo (I don't think he's a CB member), Kelite, and LexTech. In the chairs that's me on the left and dvsDave on the right. 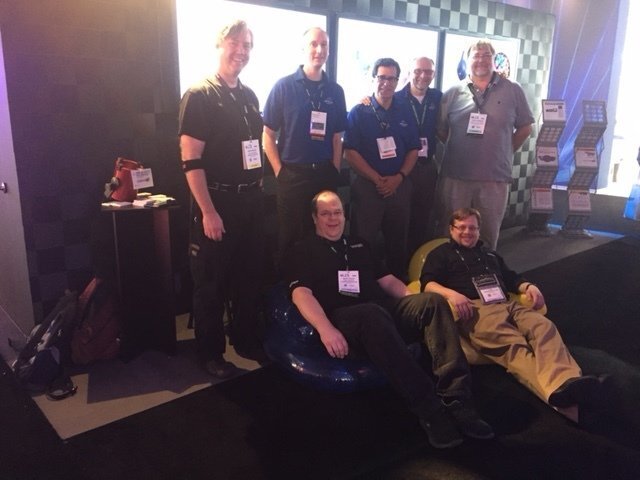 Later, I caught dvsDave and JChenault enjoying the "comfortable" seating. 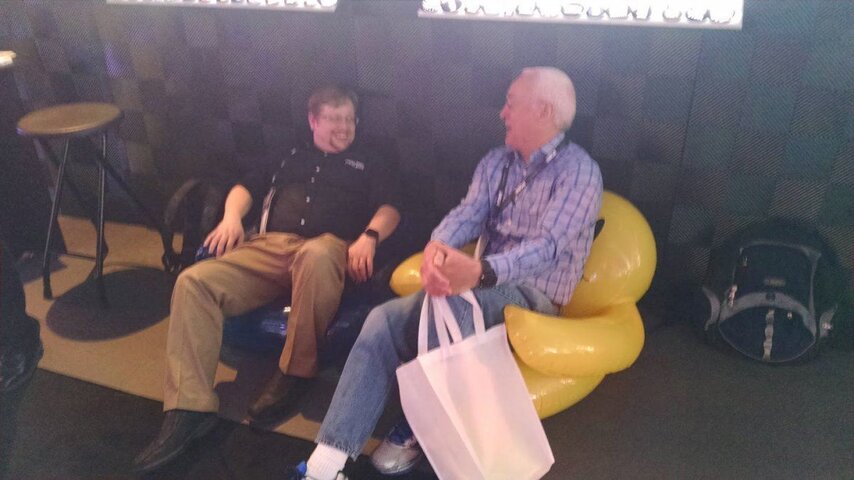 Gonna write a bit on my lunch break...

So we loved ModTruss at USITT. What a cool product and a great little company, in a cute little booth. You can find the video we shot in the USITT 2015 folder. They had one video of their truss being used during an NFL half time show. Well things have DRAMATICALLY changed for the better in the last 6 months. There is now ModTruss everywhere, Fox built a folding studio out of it for their NFL broadcasts (Check out this video of how they used ModTruss as a crane inside the lobby of a New York building in order to install a section of the Berlin Wall). ModTruss teamed up with Blizzard to do a ridiculously cool booth. It's a little hard to see in this shot but there's a yellow piece of truss at an angle in the middle, it has a claw hanging off the end grabbing the lowest beach ball. The booth was a giant Claw game you could play, Picking up and moving beach balls around. It won the award for best large booth. We were standing near the guys from GLP when it was announced, "Best booth to Blizzard Lighting for the creative use of ModTruss" one guy from GLP said, "Wait a lighting company won best booth for their use of truss?"

Wonder how they built that huge structure? They built a crane out of the mod truss and used it to build the booth!
This stuff is amazing!
T

The titan software has come a long way. A lot of people still think about the old pearls and sapphires when they thing AVO, you can pretty much still do everything you did on the old desks, but now it's on super steroids and much much more powerful. If you want to learn more they do webinars pretty regularly with go to meeting so you can watch them walk you through programming everything and ask questions while they're doing it.

You can look at old ones here:
http://www.avolites.com/training/past-webinars

and here is the schedule for ones coming up:
http://www.avolites.com/training/webinars

I am so impressed with Gantom Lighting and their founder Quan Gan. First of all he's just a really nice guy. But he's also clearly REALLY smart. @dvsDave and I had a chance to hang out with the Gantom staff a bit and you can tell this guy is always thinking, planning, and working. He's surrounded himself with a great team of smart people. I don't think Gantom is going to be a small company for long, and they are the kind of people you really want to root for to be successful.

Consider their new G-plex portable dmx control. They figured out how to turn audio from your smart phone into DMX. How crazy is that? The G-plex is tiny (not much bigger than an XLR plug). It has a great look and feel to it of something well made. It runs from a phone app (IOS and Android- thank you!). You aren't going to be running a full light show off of it, but before you get too disappointed or bad mouth it, remember it's DMX from a freakin' phone audio jack!

They sent a G-plex for me to play with and review for you, but thanks to a UPS screw up it never arrived (it's been out for delivery for a month now) Hopefully I will get one soon to test out and tell you more about. However I did have a chance to play with it at LDI and was really impressed. Yeah it's not EOS. But it's unbelievably portable. They are also really interested in ways to improve the product for future revisions and welcome feedback.