Alright, so within the last month my church has completed a new youth room. Its a pretty amazing room. I'll go ahead an post a few pictures here since I haven't told the CB Community about this yet. I haven't gotten excellent pictures yet, but here is what I have. 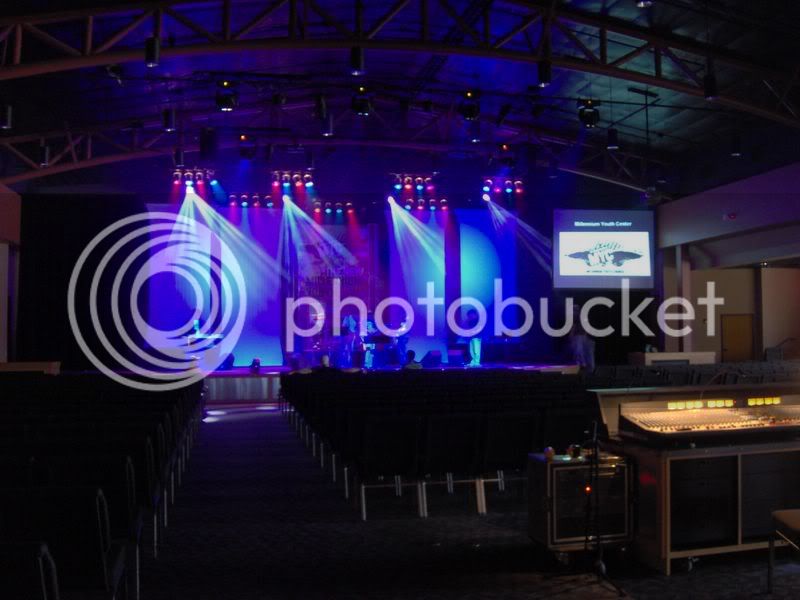 Overview of the stage during band practice. 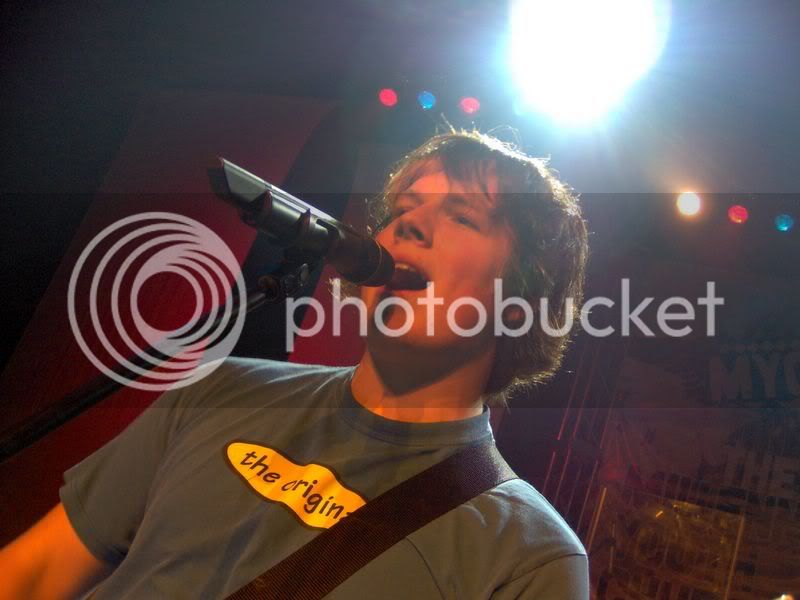 The lead worshiper that week. Chris, our normal worship leader was in Greece for some conference or something. Anyway It was a lucky capture I got. The bright white light is a Technobeam. 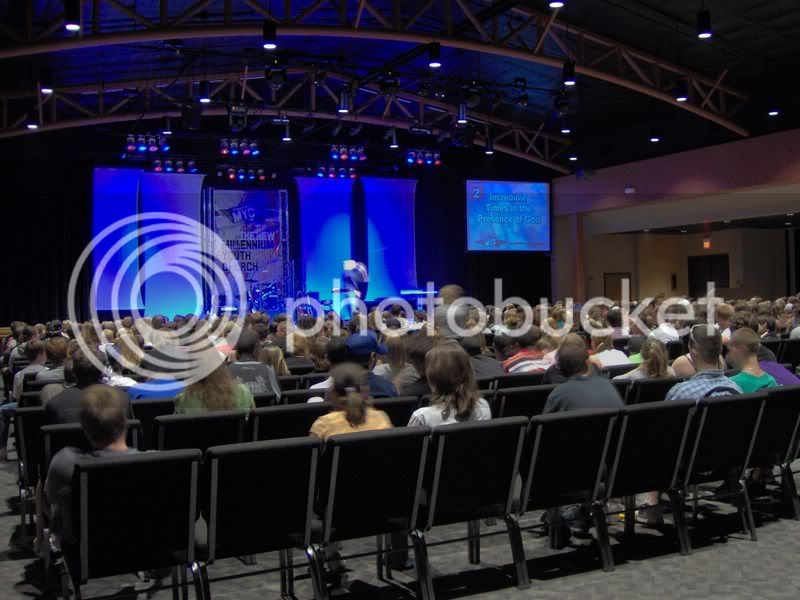 Picture during the first service in there. Unfortunately its blurry due to the half second shutter speed, but it gives a feel for the room a little better.

Anyway we were setting up the sound rig Tuesday night before the first service Wednesday. Yeah late, there were some issues that weren't addressed as they should have been and speakers didn't get flown till earlier that day. Anyway we were setting up our Soundcraft Series Two console and it was acting really strange. We had been using the mono output on it in our other room with subs in aux 8. In this room we were going to use the "mix" output (it combines the left and right main faders into one) and have a dual mono setup with subs on the aux. The right bus on the board was messed up though, so we used a small Allen & Heath we have for the upstairs booth (our main FOH booth is on wheels so it can be rolled out of the way for banquets and a small board upstairs can be used for reinforcement) and verified that our board was in fact jacked up. It was after 5:00 pm when we figured that out, but we scrambled and rented an A&H ML3000 for the time that our Series 2 was getting fixed. We got through the first service, and the second. We had to use some rented amps during that time due to us not getting amps ordered in time.

This week our Series 2 was back, and we replaced the rented Macrotech 3600 with its 5000 counterpart that we purchased. The subs it was driving worked fine for quite a while, but then when service started it dropped out once. It came back, and all was good. It dropped out again though, and went into an intermittent state. It would come on every 3 seconds for one or two notes on the bass guitar, maybe a kick, then it would go out. Jason, our audion engineer went to the amp room to figure things out. I was in the service worshiping, and I noticed he left so I went and ran FOH having no idea what was going on. He came back and informed me the amp room was full of smoke. I was just kind of like what? I had a chuckle about me in fact. Yeah, a chuckle. What I later found out was the smoke was coming from the electrical area on the rear side of the rack, not the amp itself as I suspected. He unplugged the amp during a quieter time for fear of it pulling a lot of current at another time and him getting shocked. He put it in another circuit and it went fine for the rest of the night. 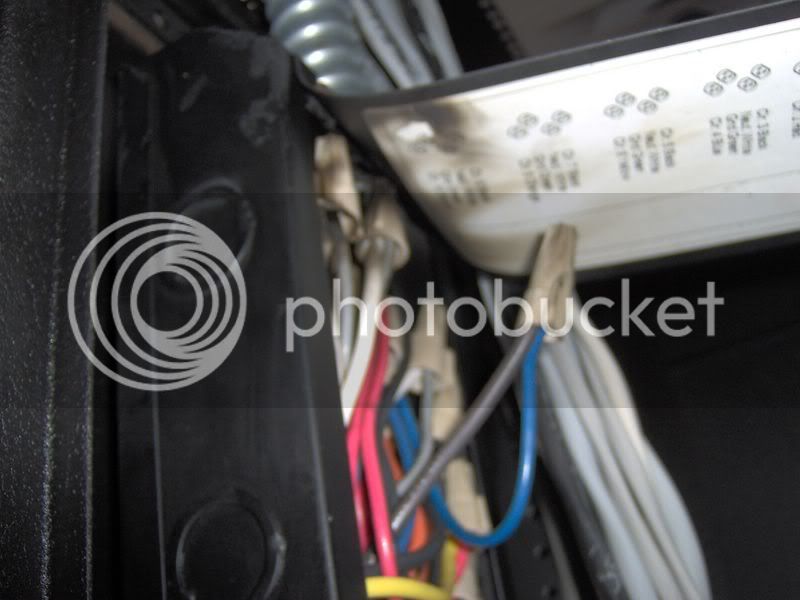 That was the result. There is more the picture didn't get, I only took one and it was blurry due to not enough light to focus and my cheap camera not having an AF assist lamp. The wirenut seen on the far left with the brown on it had a white wire, and another wire going into it. The white wire appeared to have melted insulation, and some copper was exposed not far at all from the wire nut. I have no idea what went wrong here other than I know it isn't something I need to be fixing, the electrician needs to be fixing that, I'm curious about what happened though.

It seems to me that if that could have been happening a breaker should have blown or the wire used was defective perhaps. The breaker would blow if there were a short or too much current were being pulled. To make the above happen it seems like quite a bit of current would be flowing to me. Could it be that there was a voltage spike that compromised the integrity of the wire, then the continued use on a high current device caused this result? Anyone have any ideas?

Its a good thing the room, at less than a month old, didn't catch fire.
distortion blows

CB Mods
Premium Member
Departed Member
If the room is only a month old, do not fire codes require it to have a smoke alarm? I would be suggesting that the original installer be contacted to find out why this is happening. I would think if it were new construction, that there would be a defects liability period of at least 12 months and so it ought to be fixed under that.

I'm sure the electrician will be back out there. As far as a smoke detector goes, I'm sure there is some fire detection, but it might be heat based rather than smoke based. Most sprinkler systems work entirely on that idea. There is a plastic cap that plugs it, when the area around gets hot enough the plastic melts and the water flows. It is an interesting point.

At any rate it is a good thing the sprinkler system didn't activate.
distortion blows

CB Mods
Premium Member
Departed Member
I thought it was wax rather than plastic but alas. I bet your glad the fire alarm didn't go off and evacuate the building.

Do you know what is in that electrical box? As in what it feeds?
J

I am truly hoping that “room full of smoke” is hyperbole, but surely the venue should have been evacuated. Perhaps the only consideration is whether to throw an alarm, or just turn up all the lights and calmly ask everyone to leave.

Its easy to second-guess this, but there was a room full of smoke of uncertain origin and an auditorium full of people!! Evacuating a venue may be undesirable, but the potential alternative is worse.

Premium Member
Breakers are not the be all and end all of circuit protection. The breaker has to match the cable used. For example, if you use cable that is rated for 20A and place a 30A breaker on the circuit, the cable will happily overheat and melt and the breaker will not trip. I often see people blow a fuse and then replace it with one of a higher rating. The fuse doesn’t blow but the equipment will!

I am not up to speed with US code or wiring colours and cannot make any conclusions from the picture. However, other things to look at would be to ensure that the connections are tight. A loose connection will increase resistance and this will leat to excessive heat.

Anyhow – at the end of the day it is the responsibility of the electrician to figure out what happened and to rectify the problem. I can appreciate that your curiosity is educational based and not a means for you to try to fix it yourself.
You are not the messiah wolf, you're just a very naughty boy.

Well the electrician was in today. There are now 3 30 amp circuits for the MA5000s. The electrician put an amp clamp on the sub amp in question and measured 28 amps when playing a cd loud. The electrician tried to blame the problem on us pulling too much power for that circuit, but the breaker should have blown if that was the case. 140% load on any circuit should cause it to trip unless it is that high for a very short period of time. I think there was something besides too much current involved in that equation, but I'm not sure. As far as the full of smoke part goes, thats what my friend said. I'm sure it wasn't actually full, but there was probably quite a bit of smoke. There are just a few parts of this whole situation that aren't completely making sense to me.
distortion blows

CB Mods
Premium Member
Departed Member
If you dig around, you should be able to find a trip curve for circuit breakers. Tripping time is primarily influenced by level of overdraw, but if adjacent breakers are also overdrawing and therefore heating up, the breaker will trip more easily.

If the conductors in the joint were dirty, you would find an increase in resistance and so you get heat and that would burn impurities [or in this case it seems the plastic insulation of the wire]. Nice to know that it has been professionally fixed.

At only 140% overdraw, it is quite reasonable to expect a good minute or two before cut out I would have thought.

Perhaps they do take 140% for a few minutes. I always figured you had a few minutes at anything around 110% and at 120% you were under 30 seconds, but I have never really known. Why we had a Macrotech 5000 on a 20A circuit is beyond me. I would have requested 30A circuits for it. Perhaps I should have been a little more involved in the planning and installation. There is a reason the come with 30A plugs on them. For some reason though, sadly, I can say this hole situation doesn't suprise me too much. I try to follow safe practices, but not everyone at the church does the same. Usually I just make sure what I do is safe and leave the rest alone.
distortion blows

CB Mods
Premium Member
Departed Member
Based on the technical data provided by Clipsal, at 200%, a breaker will trip within 30 seconds, at 500% about 1.5 sec, at 1000%, about 0.01 sec, however at 150% only trips within about 10 min. Below about 120%, it will hold indefinitely. If you need sensitive protection devices, either don't use C curve or use fuses. Fuses are regarded as being far more sensitive.
Last edited: Jun 19, 2006
S

Never minding the fact that it would contradict what I said about holding below about 120%. I've edited my post to remove that typo.

If the amps are on a 30 amp breaker than the wire needs to be at least 10awg. Putting a 30 amp breaker on 12 awg wire is not good. Or if the circuit was designed for 20 amps and then they realized the amp was just popping the breaker and threw in a 30 but did not upgrade the wiring that would explain the source of the smoke. In all electrical rooms smoke detection devices are required. It will not trigger the sprinklers (sprinklers are triggered by heat) but will trigger the audible and visual alarms.
You must log in or register to reply here.