I can't name an instrument!

I really hate to post here, on yet another stupid question. However, I can't figure out the name of this freakin' instrument. It's driving crazy, well actually just crazy enough to post another thread.

Well basically, it looks like your basic 360Q, but its on the skinny side, and a fair amount longer. The yoke, though it can attach on the, er, lamp / reflector/ shutter/ pattern slot assembly, is attached in the dead middle, in the center of the barrel. It has a built in iris. It has a beam angle smaller then that of a 19º S4. It's cool, cooler then my S4s. It is also old, and 99% likely discontinued. Thoughts anyone? My dept. head calls them the "torpedos". I have not sketched up an artist's rendition:

Note, the yoke in the picture should be halfway down, I forgot to move it! 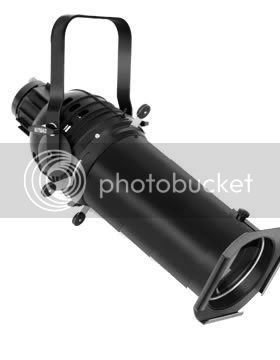 That's an Altman 360Q 6X22 Ellipsoidal reflector spotlight - at least that's what is in the picture. As for what exactly you are describing, I would have to go look in my Photometrics Handbook, which is in the office. I will look for it Monday morning if you would like...
Time Flies like an arrow.
Fruit Flies like a banana.

The opinion's expressed here are mine, all mine. You can share them if you like, but they don't necessarily reflect the opinions of my employer or any manufacturer my employer may represent.
C

jmabray said:
That's an Altman 360Q 6X22 Ellipsoidal reflector spotlight - at least that's what is in the picture. As for what exactly you are describing, I would have to go look in my Photometrics Handbook, which is in the office. I will look for it Monday morning if you would like...
Click to expand...

The picture is just one I photoshoped together, its not the actual instrument. It gives an approximate idea of size and shape. I didn't have any time during our focus yesterday to snap a picture. I think I will have today though. I ran a google search on 6x12 and 6x16, and checked the Altman website, and couldn't figure out anything about it. I wanted to get some documentation on it to figure out its field angle, and actual name.
C

Answered my own question.

A more thorough search through the Altman website shows that they used the same image for every 360 series ellipsoidal. They do however list the different ones. A search for "Iris" revealed where they were. Quick question. I'll try and measure these today. Do I measure from lens position to the base, with the barrel out, or in? Thanks.
C

Another question I'll tack in here.

Do the 360Q 6x9s come in different field angles? I tried using two to achieve a symmetrical effect yesterday, but they two were totally off, I played with the focus, and shutters, and there was no iris. But the were definitely completely off. (Same throw distance.)
Thoughts anyone?

One of the x9's might have an incorrect lens, which could account for a different beam then the other. Without doing side-by-side comparasions with additional units, you won't know which is incorrect (unless you have been using the unit for 30 years).

The x22 did indeed have a yoke mount in the middle of the barrel. Or at least the ones I used did, but that was 25years ago. Haven't seen one since.

Steve B.
Steve B.
"Read it again, before pressing Send"
F

The 6x22's can be configured either way, depending on what you're using them for. If you're doing a straight on shot (which is what they're normally used for), the yoke should be mounted on the barrel for a better balance. If they're on the reflector assembly, you run the risk of them dropping after focus. If you're using them at a pretty steep angle, you may need to move the yoke to the reflector assembly so that it will fit through the yoke.

We have a bunch of 6x22's on our eighth FOH pipe at the back of the house. All of them for some reason have their yokes mounted on the reflector assembly. Every once in a while we have problems with them dropping after focus if whoever focused them didn't lock them down tight enough. To make the situation worse, there is no catwalk or genie access to our eighth FOH, so we have to use a 12' ladder in the house with a platform or chunks of wood attached to one end of the ladder to make it level. It's a real PITA to set up...so we just started leaving the units up there instead of striking them after every show, only getting the ladder out to change lamps, focus, and drop color/templates.
Dale Skyllingstad
BFA Theatrical Production Arts
Technology Concentration
Class of 2010
Ithaca College
Ithaca, NY
S

Premium Member
Yep two types of 6x22 one that was off balance in doing a double clutch cam and in the typical position and one that was more so but had the yoke somewhere on the lens tube.

Otherwise in how the fixture looks, does it look in all ways per a Altman fixture?
C

ship said:
Yep two types of 6x22 one that was off balance in doing a double clutch cam and in the typical position and one that was more so but had the yoke somewhere on the lens tube.
Otherwise in how the fixture looks, does it look in all ways per a Altman fixture?
Click to expand...

To measure an instrument. You measure from the lamp, to the end of the barrel, right? I'll try and double check these findings tomorrow.
You must log in or register to reply here.