I recall well the Hall and Connolly follow spots, having run one on tour when we played the Shea's Buffalo theater in 1979. Great units, had sliding gel frames that moved on string.

Thanks Gaff, that was a treat.

125 AMP frontlights?!? That sounds utterly ridiculous. If that is a typo, it is a funny one. If those were real, can someone send me a link?
S

These were incredibly well built machines. They used lime green carbons if memory serves (possibly Derek or another remembers as well). You could operate the machine from either side as all controls were duplicated. EDIT: That's not shown in the liked photo's but was a feature the units in Buffalo had.

I believe they were D.C. as well and the manual does state 125 amps.

This is totally cool.

125 AMP frontlights?!? That sounds utterly ridiculous. If that is a typo, it is a funny one. If those were real, can someone send me a link?
Click to expand...

Those were 125 amp DC carbon arc followspots (called front lights in that era). The carbons were manually fed. These units were actually in use at Radio City Music Hall positions well into the 1970's.

125 AMP frontlights?!? That sounds utterly ridiculous. If that is a typo, it is a funny one. If those were real, can someone send me a link?
Click to expand...

125 amps at a low voltage. Like an arc welder. It looks like running lights was a very physical job. I wonder what the technicians from back then would think of modern lighting consoles and solid state dimmers?

Since RCMH was mentioned, I find it fascinating how much more advanced the lighting system was there, considering that only three years elapsed between the two. Located just downstage of the orchestra pit, the lighting operator(s) could actually SEE the stage! 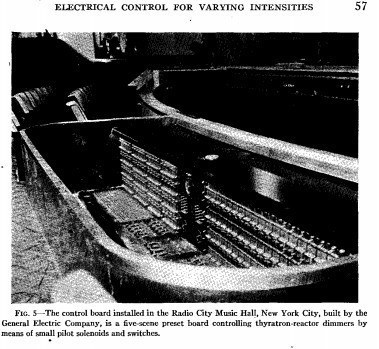 I have not been in since the renovation but the Landmark Theatre in Syracuse, NY had that style of light board running the house lights as recently as 2008. It was always fun trying to explain to traveling LDs that the house fade was not going to happen any faster then someone could crank the wheel.

Yes, fortunately the Landmark has had a major makeover. I dabbled with old ceramic resistance dimmers and a live front switchboard around the corner from it at a non-profit arts center which started out as a Masonic Lodge, built around 1920. The building has since been gutted for a renovation project which ultimately stalled. That was certainly some scary s**t to work on!

I should add, the original renovation into a more modern Arts Center stalled.....it is now apartments.
B

Wow! A short course in theatre tech history right there!

I've got to get me one of those Hub Electric Switchboards. It'll fit right into our 60X60 foot building.

(Actually, I've worked with some of its younger siblings, many years back.)

Just so everyone knows, this is an ongoing series, so I'll be sure to post updates here as I am made aware of them.

this is by far the coolest thing I've seen all day!
G

Loved the history of the old boards in big theaters.
I ran a Westlite board that had autotransformer dimmers in High School. That board was replaced in 1977 the year I graduated...

Does anyone understand how the preset function worked ( or what they mean by preset?)

It looks to me as if I can attach any dimmer to the master fader wheel, and can choose to attach to the up or down side of the wheel, but I can't quite understand how that is a preset,
S

If I recall from the Luxtrol auto-transformer dimmers, you'd "preset" the handles by turning the handle to lock to the master when the master moved to the point where the interlock would engage.

Most AT systems, portable or fixed, had this and I'm pretty sure it originated with resistance systems.

This was never a Preset system as found on lo-vo systems of the 60's and '70's, just a method to master selected handles.

I well recall running these dimmers, where you would lock all handles to the master, then start a fade up on the master and quickly unlock desired handles at defined levels. As well, setting handles to lock so the master would grab all for a fade or blackout. Fun times.
N

I seem to recall a system that worked like the old presets on a car radio.

I also saw someone using a wooden board with notches of different depths, one per handle, as a preset. Have all the handles at 0, and slide the board upwards. It would push each handle to the appropriate intensity for that scene. You would have one board per cue. Then grab a broomstick, lay it across the handles, and pull down for a master fader.

What Steve said regarding AT boards. I agree preset here referred to setting the handles to engage, or not engage, as the master were moved up or down. Ours had us sitting between two panels and we used to run them on stools so we could use feet as well as hands for running cues. Then there was that string tied to one handle that allowed changing level on a special with your teeth! Hands and feet were busy elsewhere.

For a bit of drift, in college I worked with a Century 10 scene preset system designed by George Izenour. It was a relatively early method of separating control from the physical dimmers. The patents seem to date to as early as 1949.

The Thyratron dimmers were in the trap room with the console in the booth. The console had two rows of selectors and a split crossfader. You would select which preset to fade to then execute the fade with the split fader manually. Then you could select the next preset for the next fade from the other row of selectors.

Off to the side was a panel with 10 rows of 50 dials to represent the 10 presets for the 50 dimmers in the system. Yep, 500 little backlit dials for setting levels. A musical would require 2 or 3 crew to keep up on cues. If there was a recurring look then you could decide preset 1 (or any) would not get changed so you could go there anytime. Presets could be "run" in any sequence. Otherwise you'd generally work through 1 - 10 and have 1 reset for cue 11 and on and on.
You must log in or register to reply here.