venuetech said:
no this sling would be just 10 inches eye to eye. very short. something you would make from the GAC and would need to add thimbles, ovals and build time. ...
Click to expand...

AKA a dogbone. But I'd worry about the short sling staying in place and not sliding along the batten until there was tension on the pick lines. I'd want to wrap the pipe at least once, so would need it to be minimum of (1.9" x 3.14 x 2 = ) ~12" swage to swage. And offers no adjustability.

A trim chain (but NOT the kind with a mutt hook) is still the preferred method, I suspect.
.
F

One rigger I was talking to gave me some advice for the connection of the aircraft cable to the trim chain. He said that I could attach the aircraft cable into the last link of the trim chain permanently when I make my loops. The chain would then be wrapped around the batten like my picture and a the shackle would attach the chain to itself at the desired trim. This seems safe and all. Is it a recommended way to go generally? I was thinking that the shackle would connect both ends of the chain and the thimble. 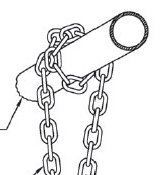 
freedomverse said:
... I was thinking that the shackle would connect both ends of the chain and the thimble.
Click to expand...

In my experience, shackles and chain just don't want to play well together. Only the pin should go through a link. Otherwise, one must use either: overly large chain OR overly small shackle; and still run the risk of side-loading. With one end of the trim chain permanently attached to the lift line, one still retains trimming flexibility by putting the bell of the shackle in the thimble and then the pin through any link, not necessarily the last one, of the chain. ( Or by choking the chain with the shackle, provided a single strand of chain is acceptable/permissible.) 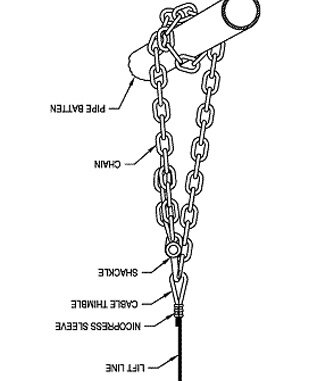 Of course, if the above picture were real, the unused four links would be hanging down, not up.
Last edited: Mar 9, 2013

gafftapegreenia said:
Anyway, while bottom hanging a flat is preferable because it puts the flat into compression while hung, most people top hang because it can be hard to get a flat to hang plumb with bottom hanging, unless the method I described is used.
Click to expand...

I contend that hanging a wood-framed scenic piece from the bottom member is the ONLY acceptable method. I sure hope most people don't top hang. With a steel frame top-hanging becomes OK.

Van said:
You are through-bolting with 2, 1/4-20 bolts, then cutting the bolt flush after sucking the nut into the face of the flat right ? and only using #10 wood screws in the other two holes, right ?
Click to expand...

I can't say I've seen that method done much, although I can see it being very useful if used on the bottom rail, as it allows for a completely flush installation. Is that a common West coast method? And would it be acceptable to use flat head stove bolts in the countersunk holes, instead of wood screws?

I'm almost afraid to admit openly that I have used short lag screws at more than one venue to attach hanger irons. Is this frowned upon?


techieman33 said:
If you have to hang things a lot and have the budget I would buy gliders [Verlock, Gripple]s instead of turnbuckles. They're fast to level something out with, and you have tons of adjustability since you can make the cable 3" long or 20' long in a few seconds.
Click to expand...

I would not use a Gripple for hanging anything more than a banner or small, lightweight decorative element, but that is just personal preference. Maybe it is a completely unjustified and irrational preference on my part, but I am inclined to trust a forged Grip lock more than the Gripple. I've used Grip locks on several occasions, and have been very happy with them, and from walking the show floor at USITT, other companies, such as ZFX, also like the Grip lock. Uncle Bill, on the other hand, does not approve. If your grip/ver lock is the kind with a nut at the top, it is important to mouse this with e-tape, as I have witnessed these finger nuts coming loose during a run from normal flying operation.


freedomverse said:
The names of these flats is so confusing when differant people you talk to call them different things. Mine are broadway style flats (1x laying on it's face) covered with luan. They are about 1 1\4 inches thick. Sorry if I confused anyone.
Click to expand...


danTt said:
but I usually see them used with a crosby clamp as a safety.
Click to expand...

Smart, I'm going to remember that for future Grip/Ver lock use.

DerekLeffew The golden flat hardware is all made by TheatricalHardware.com. They are recent (within the last decade?) updates to classic flat hardware. Their biggest claim is that all there hardware is rated. As a note, I have seen silver D-ring plates with rounded corners, just like the golden one made TheatricalHardware.com, except clearly older.

As for why should one stock keeper plates in addition to D ring plates? Not much reason really, except that the "stubby" keeper plates fit nicely on the inside face of 1x3 when used to frame Hollywood flats.

derekleffew said:
2. Does wrapping the D-ring not exceed the minimum stated bend radius of the wire rope?
Click to expand...

Exactly the what came to my mind as well.

derekleffew said:
A trim chain (but NOT the kind with a mutt hook) is still the preferred method, I suspect.
Click to expand...

Probably still the most common method, although I have seen some respectable theatres that have started using batten clamps instead of trim chain.


kicknargel said:
I contend that hanging a wood-framed scenic piece from the bottom member is the ONLY acceptable method. I sure hope most people don't top hang. With a steel frame top-hanging becomes OK.
Click to expand...

I must be honest. I have not personally hung scenic framed flats using top hanging irons, as I know it is greatly preferable to hang scenery under compression as opposed to tension. However, I have seen it done, and I have not yet had anyone implicitly tell me that doing so is forbidden. Did top hanging irons exist before metal framed scenery was commonplace? I hope some other users will chime in with comments on the proper usage of top hanger irons.