Hi.
I'm not much of a lighting guy, but I offered to help a local venue with a broken lighting system. I took a look and appears to be an Electro Controls 733C6, but I'm not having much luck finding any further information about it. Does anyone know where I could get schematics or any kind of repair manual that I could pass on to the venue?
Any information would be helpful. Thank you.

Couldn't find anything except the slider patch in my EC archive, but my 1957 Ariel Davis Manufacturing Company catalog had the 733C3 which looks similar. Attached are the catalog pages which include a schematic. Ariel Davis was the forerunner of Electro-Controls. What are the problems they are having with it?
If it has anything to do with the sliders, it doubt it will be possible to source replacement parts. 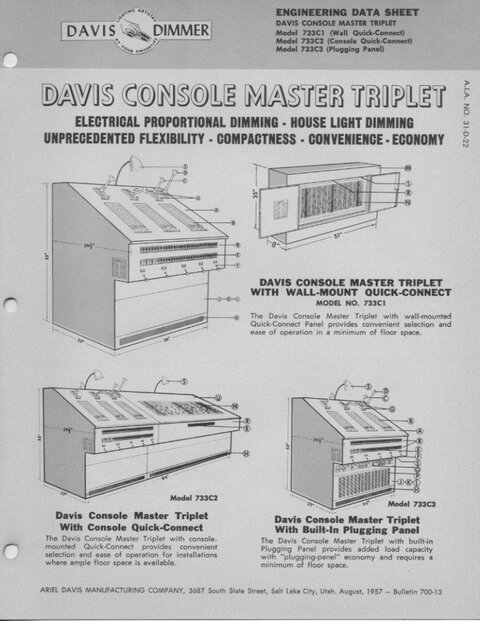 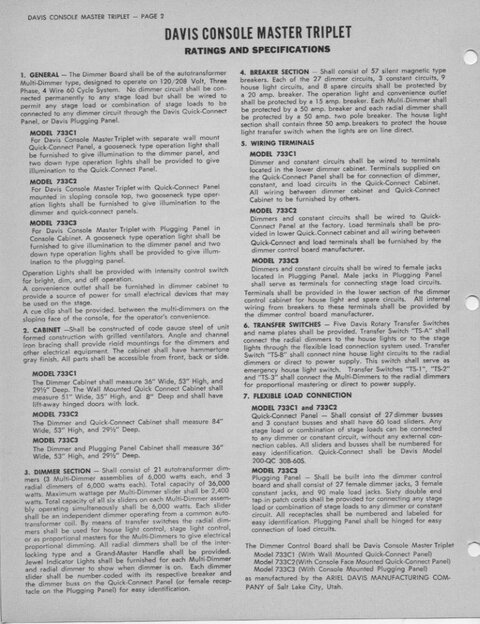 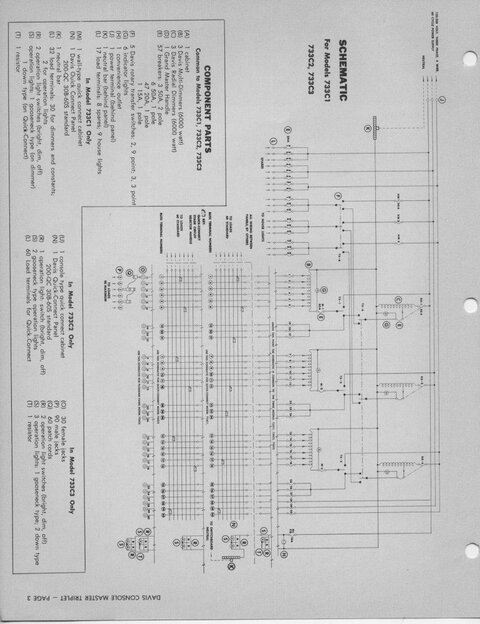 Senior Team
Premium Member
I suspect your only hope of obtaining parts would be Lite-Trol.
"Hold your hat and hallelujah, Mamma's gonna show it to ya!"
​
F

Fight Leukemia
That is very similar to the Davis equipment I played with in my youth. Davis must have become EC in later years. Six output autoformer dimmers, slider patch switches, and many Heinemann circuit breakers. unfortunately the problems are likely to be worn brushes on the sliding autoformer taps, and burned contacts on the patch switches. The patches were not meant to be switched hot, but people often did, resulting in damage. Unless you can find a source of parts, you are out of luck. As much as I'd love to see the old beast live on, my advice is replace the whole mess with a dimmer rack.

Indeed it did; 1964 to be exact. See the wiki entry Ariel Davis Manufacturing Company.
"Hold your hat and hallelujah, Mamma's gonna show it to ya!"
​
A

Premium Member
Trevor. Have you tried contracting Strand? EC was purchased by them in the mid 80s. It is possible they have support information in their archives.
Anne
D

the dimmer shown was developed by Ariel Davis in the early 50s. I worked with that type back in 1952 and all through high school and college up until 1966. I know it continued beyond that after Electro Control became the new brand. Not long after Electro Control took over, they started making Solid State dimmers. 0 - 15 volt control of back to back SCRs. The whole thing brings back a lot of memories, but it would be time to retire the system and go with something a bit newer.
F

avalentino said:
Trevor. Have you tried contracting Strand? EC was purchased by them in the mid 80s. It is possible they have support information in their archives.
Anne
Click to expand...

Strand barely supports their own, older equipment. They can't even support 20 year old products, let alone something more than 50 years old. That's my biggest criticism of Strand.
You must log in or register to reply here.